On the Army Air Force website, forum section, there are photo's on two pages for the Thomas Crew of Z-7.
Here are the links to the pages:
http://forum.armyairforces.com/photo.aspx?apage=37&asort=3&albumID=31&page=1
http://forum.armyairforces.com/photo.aspx?apage=37&asort=3&albumID=31&page=2 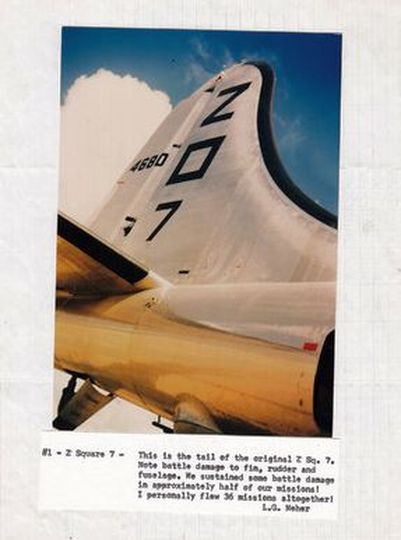 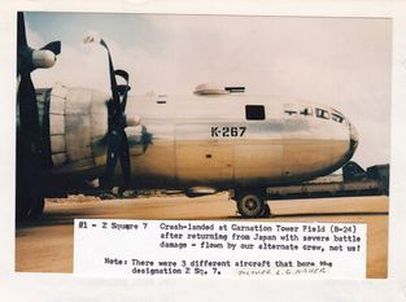 Z-7 at Carnation Tower Field
A couple of nice color pictures above showing damage to Z-7, 42-24680, "Hell's Belle", of the 881st Squadron, 500th Bomb Group, after the mission of 3 Dec 1944 against the Musashino Aircraft Engine Factory near Tokyo.  Photos are courtesy of Lisle Neher, right gunner on the Sullivan crew, 881st.

Here is an expansion and rewrite of what I originally wrote and posted on a site about this incident way back on 3 Dec 2009:

"With plenty of warning, the Japanese had assembled dozens of fighters at high altitude, by some reports as many as 70.  They picked their time and dove down in their firing passes.  First to be hit was Z-7 (McNamer), "Hell's Belle", on the far right of the formation.  She took a 20mm round below her nose which caused the bomb bay and wheel well doors to open and the landing gear to come down.  The drag slowed the plane immediately and she began to drop behind. Smelling blood, enemy fighters closed in. The crew was able to get the landing gear back up but the doors would not close, and  the bombardier was unable to salvo the bombs.  All the while this was going on, the fighters were shooting Z-7 full of holes.

"Relief for Z-7 came at the expense of another B-29.  Just after bombs away, Z-1, out in front, was assailed by several fighters. A Tony flown by Capt.Teruhiko Kobayashi, a hot pilot and the youngest group commander in the Japanese
Army Air Force, made a head-on attack and hit Z-1 in her left wing tanks. Flaming gasoline began to flow over the wing and into the plane. Z-1's gunners fought back hard. They hit Kobayashi's fighter but he managed to make it back to base. Goldsworthy saw several other fighters hit and one of them explode. But the fighters had knocked out at least two of the bomber's engines. As she dropped out of formation on fire, most of the enemy fighters followed her down. As this was happening, the crew of Z-7 was finally able to salvo their bomb load, then put on power and pull away.  Though badly damaged, she would make it home to Saipan, crashing on the B-24 strip when the nose wheel
collapsed.

"Not so lucky were the crew of Z-1. As the plane was going down, airplane commander Goldsworthy gave the order to bail out and strained to hold the big bomber level to give his crew time to get out. But there was a problem up front.
The men there had to go out the nose wheel hatch but the landing gear controls had been shot up and the nose wheel wouldn't go down. Flight engineer Hank Warde quickly jumped into the nose wheel well and kicked at the wheel until it went down. This allowed King, Brugge and Warde to jump out. The bombardier, “Pat” Patykula, seemed to be in a daze and in no hurry to leave the plane. By this time, the rear of the front compartment where the navigator and radio man were
stationed was fully afire and the fire was spreading forward. With “flames licking at the seat of my pants,” Goldsworthy finally gave up the controls, dragged Patykula to the exit hatch and pushed him out, then jumped out himself.
The radio operator, John Wright, somehow made it out of the plane, possibly through the forward bomb bay, but he was badly burned. The navigator, Benjamin Franklin Edwards, apparently did not make it out. This may have been a
deliberate choice on Edwards' part, as he had vowed to his family that he would not bail out over enemy territory.

"Two of the men in the rear of the plane also apparently did not make it out. Ring gunner Abel had been wounded. Nobody knew what happened to the tail gunner, Corrigan; the interphone system had been shot up and there was no contact with him. But neither man was seen on the ground. Left Gunner Schroeder, right gunner Goffery and radar operator Wells did make it to the ground, although Wells was injured.

"Upon leaving the plane, Goldsworthy saw a parachute, which he believed was Patykula's, open up below him, quickly turn brown and burst into flames. Goldsworthy would never forget the sight of Patykula, “a fine boy, a grand friend and one of the best bombardiers in the Air Force,” dropping to his death. But at the moment Goldsworthy had his own serious situation to think about. He had been in too much of a hurry to get out of the plane to hook up his emergency oxygen and he was at almost 30,000 feet. Also, there were still Japanese fighters around and he didn't want to chance being machine-gunned in his
parachute. So he fell free for what he estimated to be about 15,000 feet before pulling the ripcord. As he did so, he wondered if his chute would burn up like Patykula's... but it opened all right and he drifted safely to earth."

And so Bob Goldsworthy fell into the hell of Japanese captivity.  More about that later.  Most of the story of the downing of Z-1 that you just read above came directly from Goldsworthy, who is still very much alive.

A few more comments on the pictures of Z-7.  In the second photo you can clearly see the collapsed nose wheel.  The gear pushed straight up thru the nose wheel hatch.  Lucky nobody was sitting on it.  Also notice the bent propeller tips where they hit the runway. 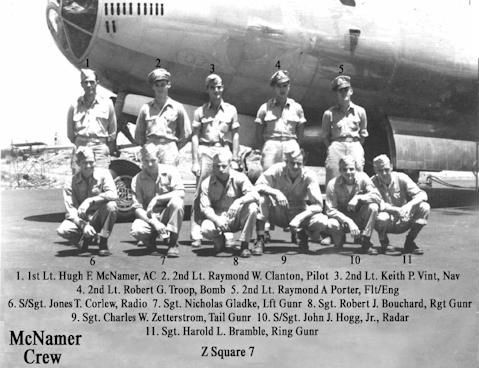 Gunner Nicolas Gladke, front row-2nd from left, #7. He was assigned to the McNamer crew after Lts. Engle and Pavey were KIA in the crash of the "Draggin Lady" and that crew was dispersed to other aircraft. 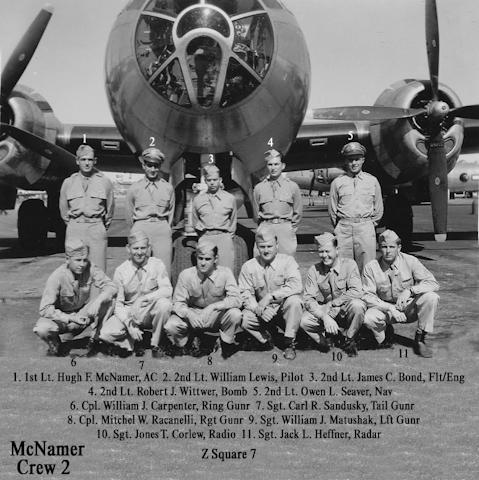 Lt. James C. Bond, (standing in the middle of back row, #3) while serving with the Hugh McNamer crew on the Z Square 7, "Hells Belle's." Lt. Bond became the navigator on the Fitzgerald crew when Herschel Connor was promoted to H.Q. and was KIA 17 March 1945 over Kobe, Japan