"There are many unanswered questions.....things we will never know about the fate of this crew and other crews,  but in remembering, we can be proud of who they were, what they did, and what they stood for, and what they are a part of."
-"Hap" Halloran to his friend Frank Grube, about his feelings for his fellow airmen.
(Read the survival story of the amazing man Raymond "Hap" Halloran here:  http://haphalloran.com/)
(by Richard Cookson)

"Hap" Halloran broke the bonds of earth and took his last flight on 7 June 2011.
He will be interred at Arlington National Cemetery on 18 November 2011 with full military honors.
http://www.arlingtoncemetery.mil/

Hap's son Dan notified us that on the day Hap left us, Hap had enjoyed a super "bonus day" as they called it.  They all celebrated Dan's sister Peggy's birthday. Hap sung Happy Birthday to her along with everyone else.  There we hugs all around during a thoroughly, good day.  Hap was tired when he went to bed that night, and felt good about his family and their well being... and just let go.

My wife and I have had the honor and privilege of visiting with Hap and his son Dan at the V.A. facility in Menlo Park, California.  Hap was having a "bonus day" as Dan calls them, and we had a wonderful time with them.  As usual, Hap was very lively, outgoing and acted as our host and tour guide.

He was in excellent spirits as he entertained my wife and I, spinning his stories with candor and excitement.  We thoroughly enjoyed what he had to say about his adventures and himself.  He was not bragging, because Hap was a modest man who truly had the zest of life within him.  He still possessed the charm and charisma he always had, which endeared him to so many people.  He loved visitors...  and he was fun!

When I teasingly told him that, to people like me, he was a "living legend."  Hap laughed heartily and replied ,"yep, that's me, the living legend."
I teased him about us making an appointment to visit him, he smiled a big, toothy grin. Hap's eyes lit up as he replied
that was because of his "busy schedule."  Hap was an ornery man with a heart of gold.  I  gave him a picture of himself and "Bud" Farrell clowning around with Sallyann's yellow flower hat.  When he saw the picture, he laughed again and told us  "I wasn't going to wear that hat."  As you see in the picture, "Bud" is wearing it.

Hap loved sweets and cookies, so my wife and I took him several dozen... to be rationed, of course!  Thus, I  became the "cookie man", which suits my last name.

Hap and I  exchanged gifts, which was fun for both of us.  Along with the above photograph of he and "Bud" Farrell, I presented him with the book "B29 Hunters of the JAAF".  The book contains a nice section on Hap and his crew.  I  also presented Hap with a photograph of he and his crew, and a picture of a plaque presented in their honor. Finally, I gave him pictures of our Uncle Bob's crews on Z Square 6, and Z Square 8.

In return, Hap gave me a beautiful, large photograph of his B-29, V Square 27, while being attacked the night he was shot down.  He also presented me with an autographed photo of his friend "Pappy" Boyington and VMF 214, and a booklet of his lifetime memoirs. I will always cherish these articles given to me by a  truly special man.

My only regret is that I didn't meet "Hap" much sooner, and that I didn't have the opportunity to get to get to know him better.  He epitomized what the "Greatest Generation" was all about...honesty, hard work, integrity, and diplomacy. I wonder, if somewhere, he has been reunited with his buddies, and if the "Rover Boys" are all back together again.

We wish to thank Hap's children, Dan and Peggy, for making it possible to meet their dad. They spent several hours each day visiting with Hap, and the love and respect they all have for each other is obvious.

There is a Memorial Fund set up Hap at the following: 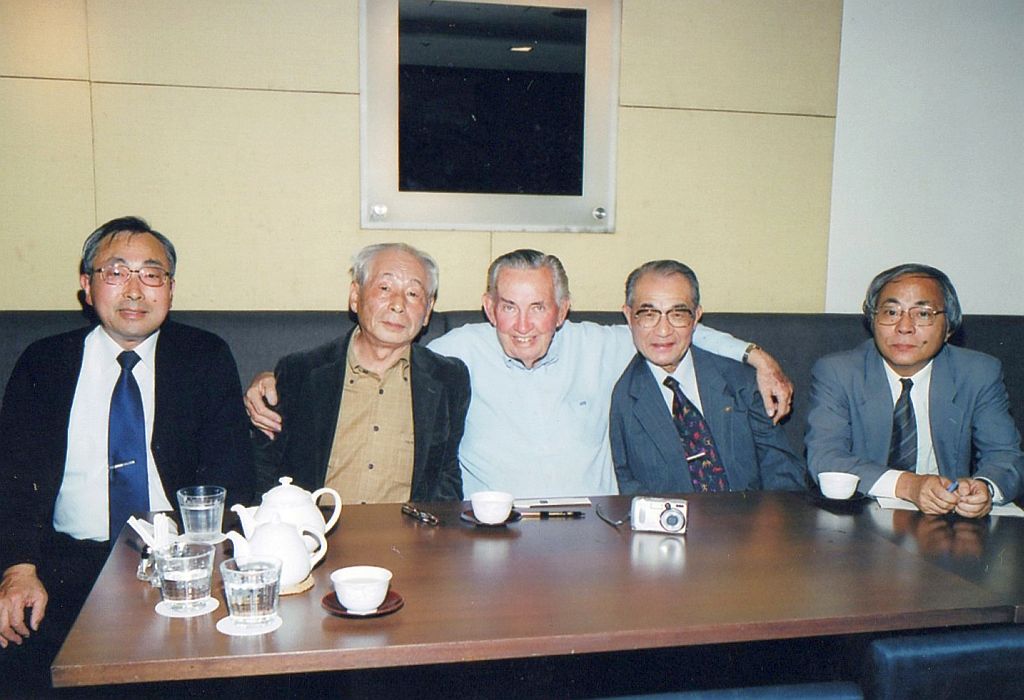 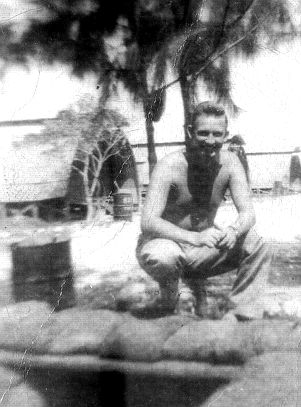 "Hap" Halloran relaxing on Saipan in 1944, before his B-29 was shot down and he became a POW 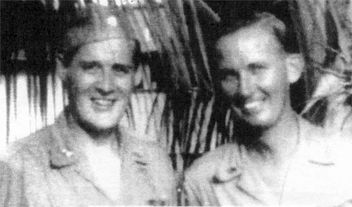 ABOVE PHOTOGRAPH-Bob Goldsworthy and Hap Halloran in Hawaii after the war. They had been interred in the Omari POW Camp, Tokyo, and remained friends for the rest of their lives.
Years after WWII ended, Hap Halloran still experienced nightmares about the downing of the V Square 27, and his months of brutal treatment in captivity.  But, in 1984 he made his first of many excursions back to Japan and his pain began to wane.  He became an in-demand, requested motivational speaker, and always spoke extensively of peace, faith, reconciliation, and the appreciation of life and freedom.  He overcame the demons from his past and  became a beacon of hope to those that sometimes had little.

Two occurences in Hap's book stood out for me. The first instance was when he was displayed, naked, for an entire
day in the zoo in Tokyo, so the Japanese civilians could parade past him and view their enemy. This was one of the
lowest points in his life.  He sadly had lost all of his dignity from this humiliation.

The second instance occured during the surrrender ceremonies by the Japanese in Tokyo Bay. Hap watched the fly over by hundreds of B-29s from his hospital ship with tears in his eyes.  Proud of himself, his comrades, and his country.  But the mental and physical anguish he was suffering at that moment must have been overwhelming.

Hap has said that had the United States invaded Japan, every allied POW would have been executed immediately.
He stated "we knew that, and sweated out each day.  The atomic bombs dropped on Hiroshima and Nagasaki saved our lives."  Lives were sacrificed so others could live.  That's the nature of war.

Not surprisingly, Hap met two of his life long friends while a B-29er............Chester Marshall was the Co-Pilot for
the primary crew of John Cox on the V Square 27, the plane Hap was shot down in.  Chester Marshall became a noted author and co-wrote the book "Hap's War" as well as writing the introduction.

Nicknamed El-goldo by Hap Halloran, Robert Goldsworthy met Hap when both were POW's in Tokyo and they relied heavily upon one another.  They were the "honey-dipper" team, taking waste from the POW camp and using it to fertilize the vegetable gardens they were forced to grow and cultivate.  But they were forbidden to eat what they grew.
Major Goldsworthy became life long friends with Hap and  James Farrell, and remains so to this day.
He wrote the Forward introduction to the book "Hap's War."

After the War allegedly ended on August15th, the first B 29s that I saw/remember over the Empire was third week in August - flying low apparently to recognize POW facilities.which by now were clearly identified with large markings on roofs. They were not identified during the War. Several days later(about August 25/26) B 29s came back and dropped supplies into our POW facility at Omori on the SW edge of Tokyo on the Bay. What a sight to see our B 29 guys come back - they hadn't forgotten us. Even though most of the parachutes dropped with supplies failed to open (some injuries obviously) that was one great day. B 29er guys were never POWs. We were Federal Prisoners on trial for our lives having signed a Japanese document in Kempei Tai, downtown Tokyo , on first nite down (over 357) on 1/27/45 stipulating that we had  idiscriminately killed civilians and thus we were Federal Prisoners living/surviving precariously; on trial for our lives.
We also signed off on Geneva Conference rules. After solitary days/nights in Kempei Tai 32 B 29ers who were being held in various Tokyo locations were united at Omori. 18 of them were from the 462nd shot down over Yawata on August 20, 1944. Most of the rest of us went down over Tokyo area. We could never mix with other POWs from the Philippines, Singapore, etc. until the food/supply drops by the B 29s. We were proud to be B 29ers that day and the approximate 500 regular POWs thanked us profusely. We were weak but very proud. Were liberated on August 29 by Marines/Navy and taken aboard Hospital ship Benevolence in Tokyo Bay along with the War ships all around us. On September 2nd I was leaning
against the railing on the Benevolence - the sky seemed to be filled with aircraft of all types - and then I could see what
must have been hundreds of B 29s flying low nearby over the Missouri. What a sight -what a sound; I will never forget that day - it is OK to cry with happiness after crying so many days in solitary from pain and fear and cold and severe treatment - and just being alone in a cold dark cage.

Sorry I rambled so much - the mention of the Show of Force preceded by the food/medicine/supplies drop by those Great
B 29s and the guys who flew them; triggered memories of 56 years ago. I just wanted you to know how important  those events were,and also express my Thanks to those B 29 guys who flew the day and the night fire missions and these
very special missions that eventually contributed to our survival and Liberation.

I visited most of the major cities in Japan in late October and early November this year. Spoke in Tokyo and Kobe and
Kyoto and Hiroshima. B 29s are a hot topic in a very positive way over there now. I met with people "who were there" during the regular raids; the fire raids and survivors who were in Hiroshima on 8/4/45. Naturally, I visited the old Kempei Tai and Omori locations and the memories came back - I looked skyward as we crossed the bridge over Tokyo Bay - and
in my mind vividly recalled that Wonderful Day of September 2nd, 1945 - the B 29s and the Show of Power.
I could almost recreate and see and feel that wonderful day all over again.
Flew down to Tokyo and Tinian for a revisit.

The commercial flight time from Saipan to Tokyo is now two hours and 45 minutes; Guam to Honolulu (no refueling at
Kwajalein needed these days) is about 8 hours; and Honolulu to San Francisco about 4 hours and 20 minutes.
Quite a bit shorter than you experienced on your return home. I flew Japan Air Lines on all segments this trip - We experienced no fighters or flak over Tokyo as we entered that air space.

Happy New year in 2001 and in all the Years yet to come over our Horizons.
-Hap 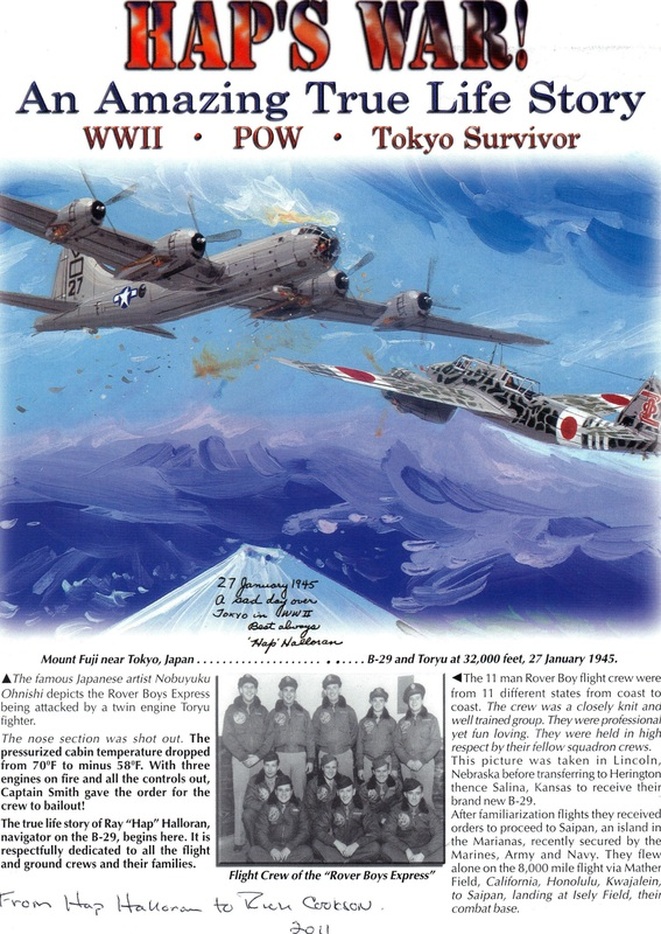 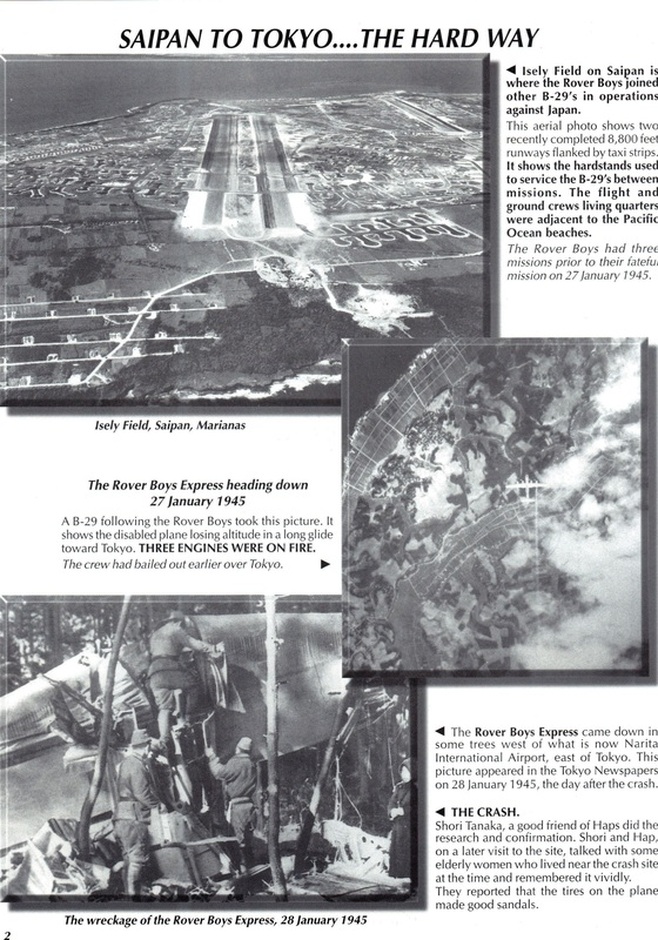 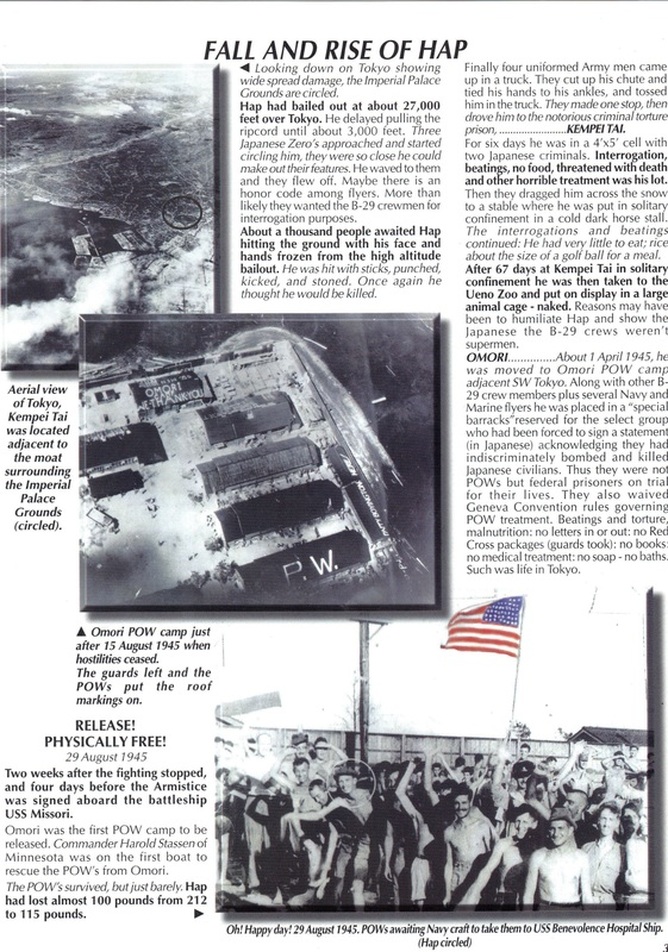 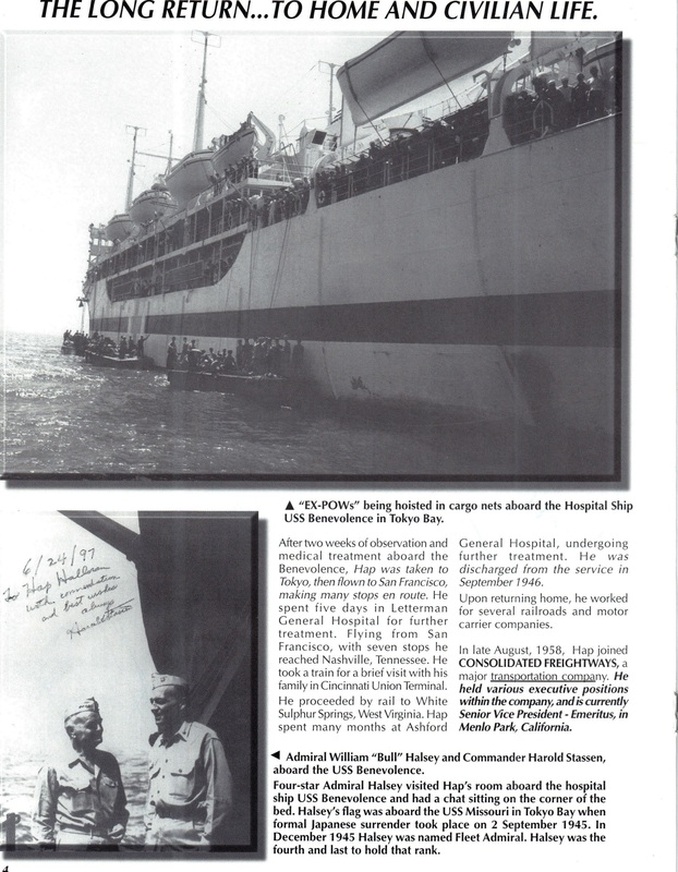 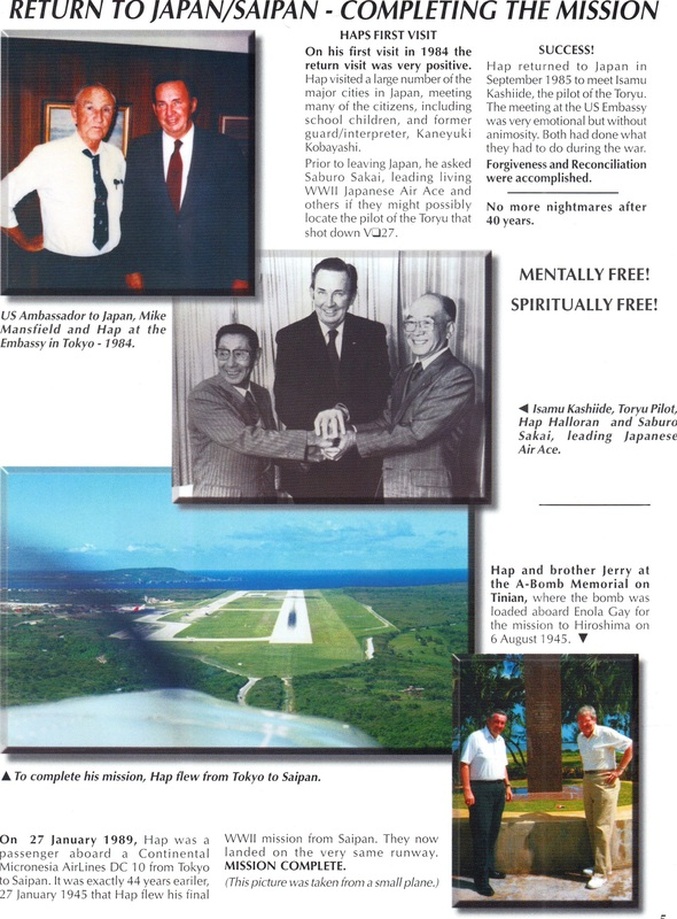 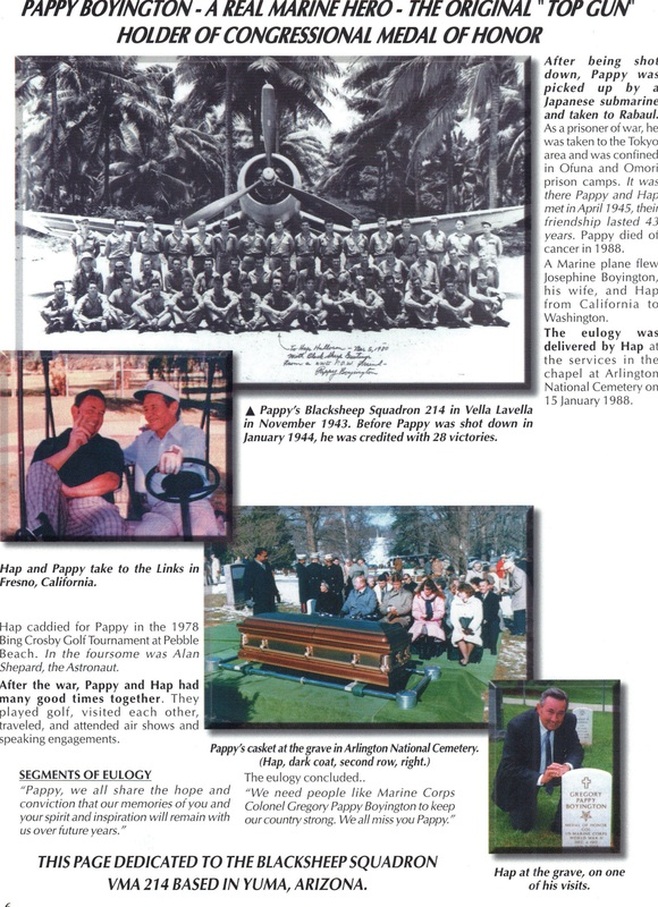 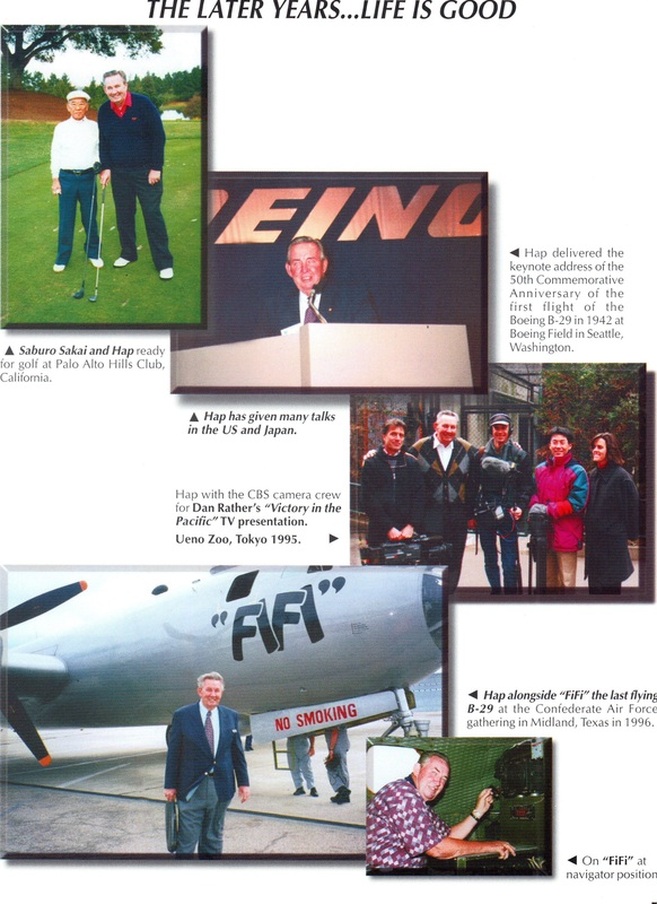 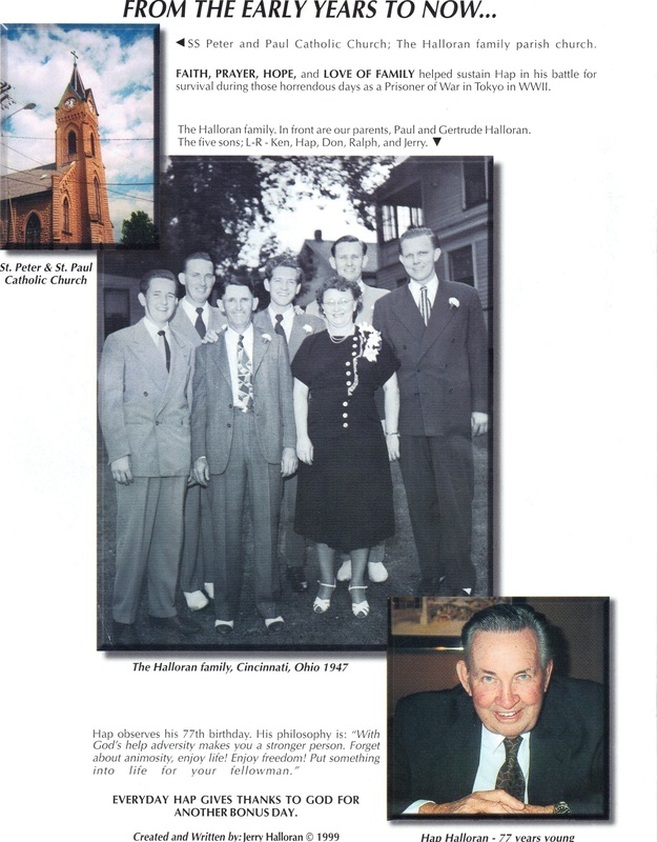 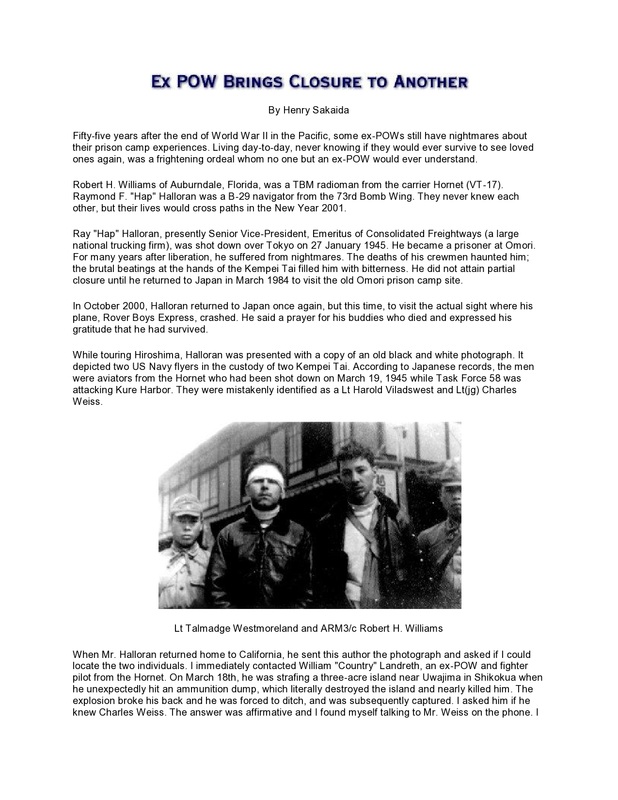 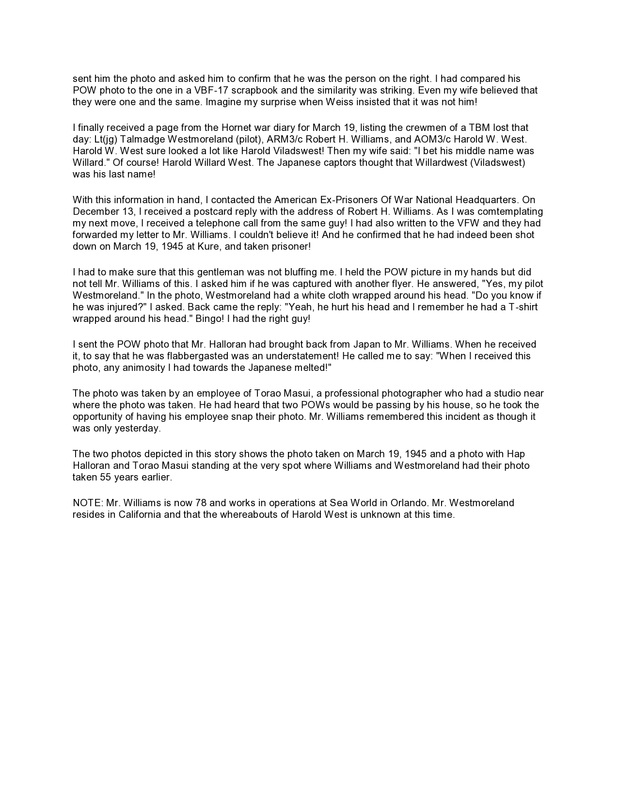 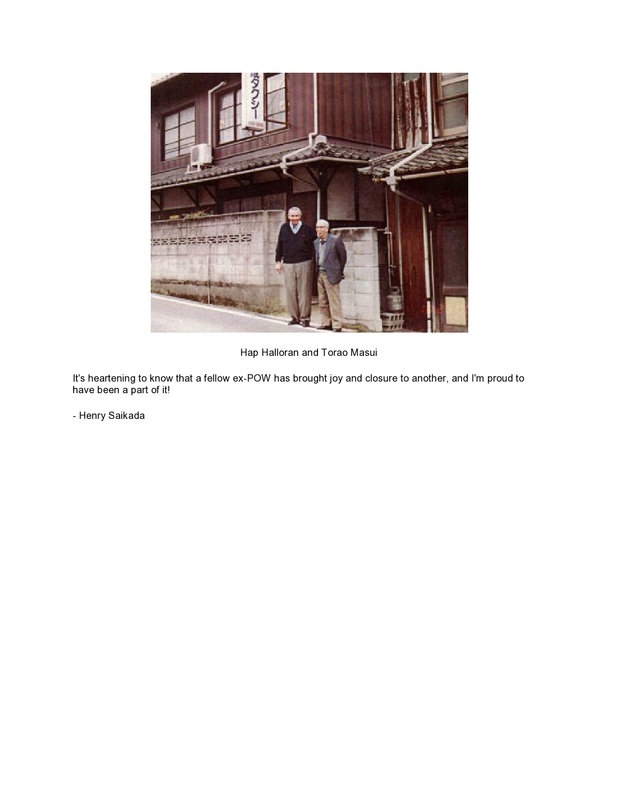 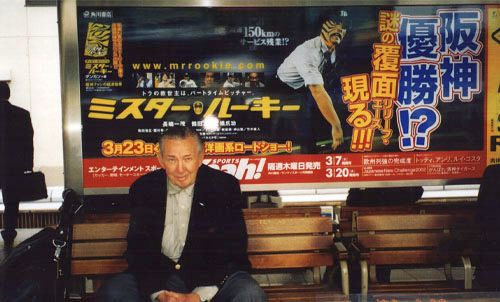 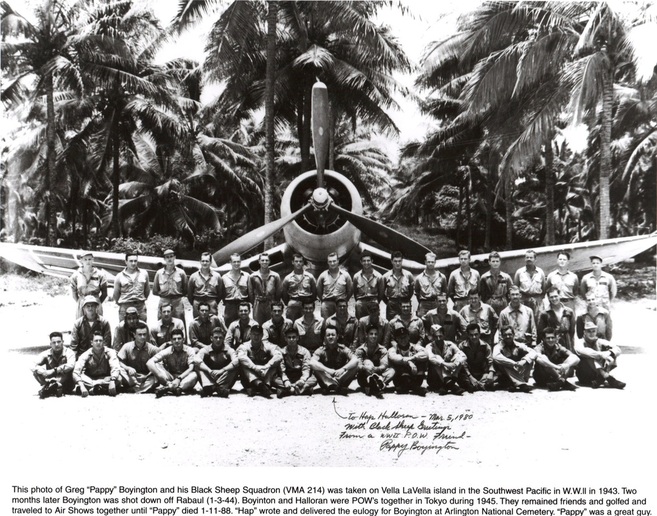 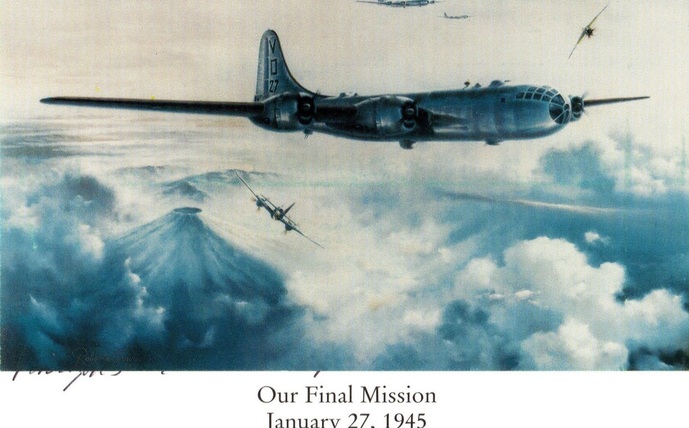 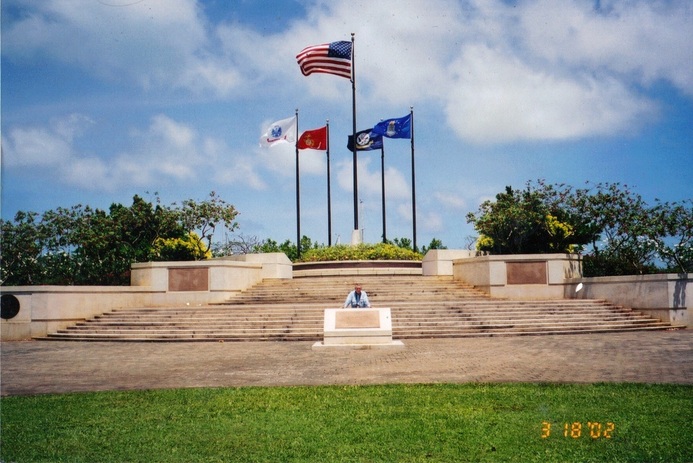 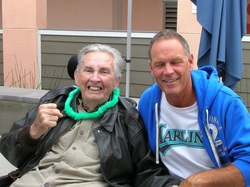 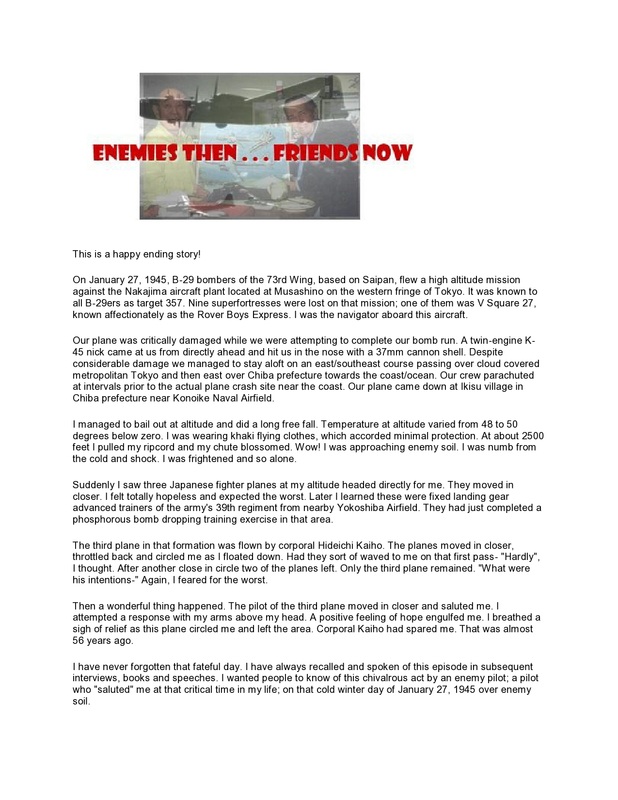 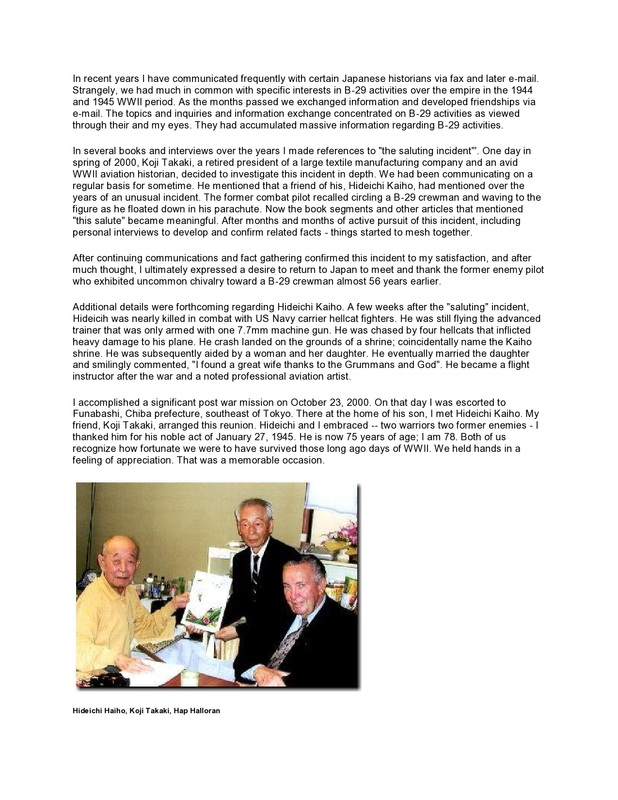 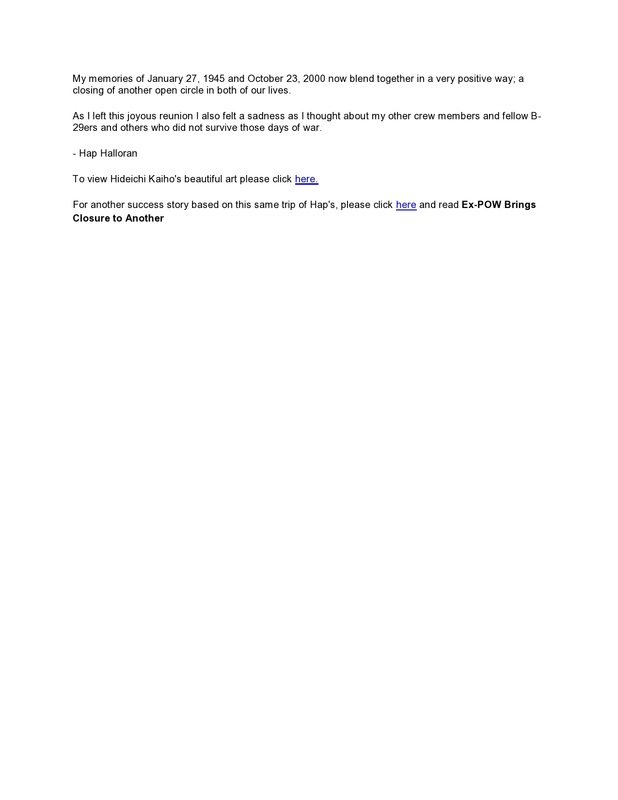 Raymond "Hap" Halloran took his final flight on June 7, 2011. A brave airman and fine gentleman.  "Always in our hearts." 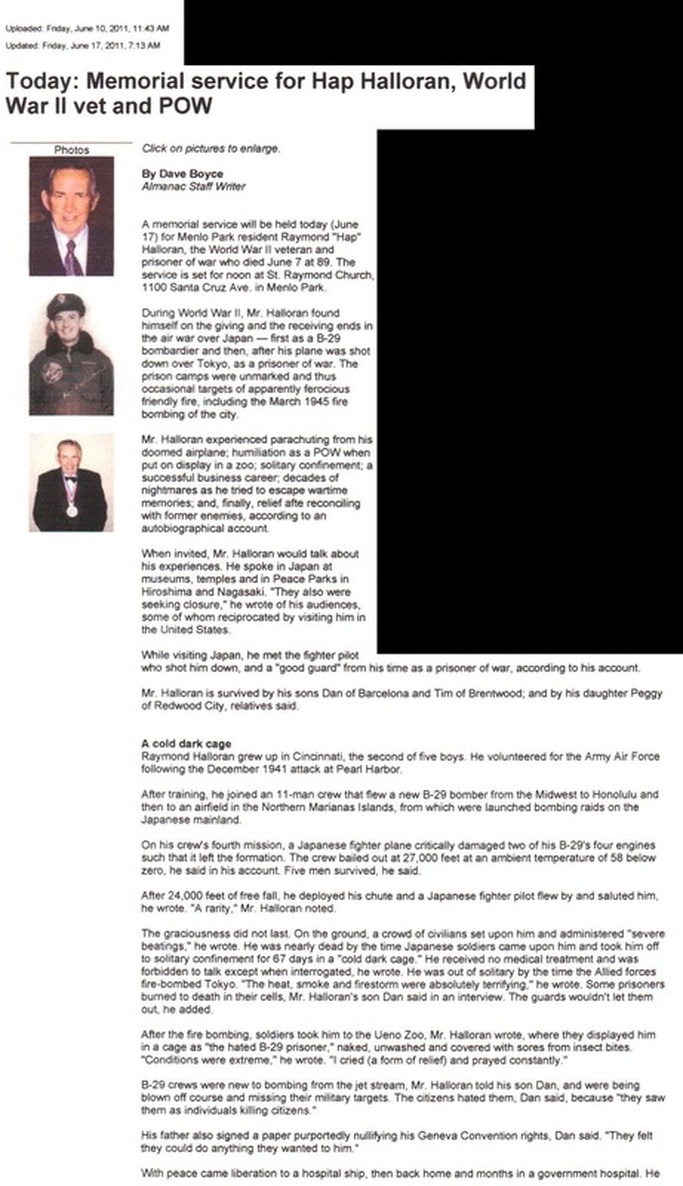 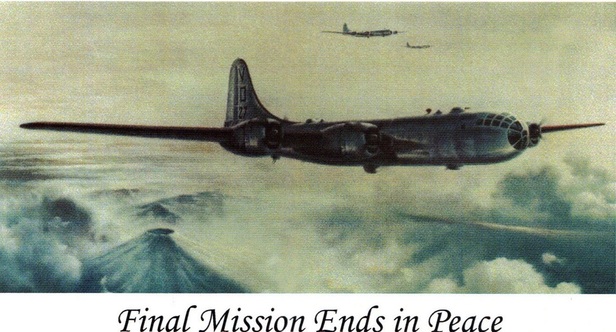 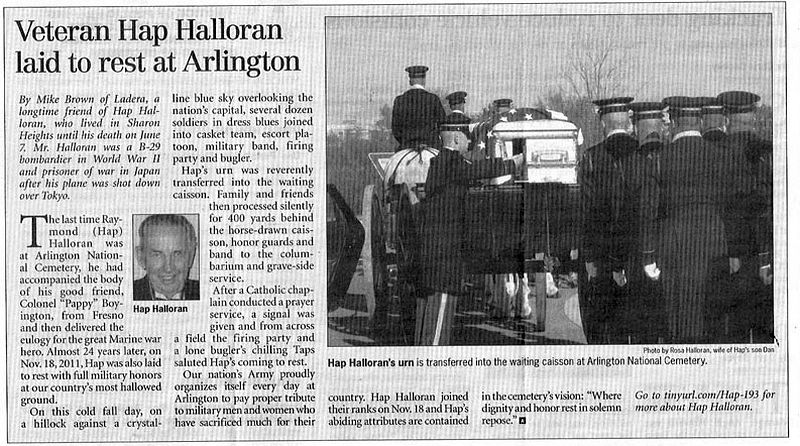