It has been our privilege to get to know Ed Lawson and have him participate on our tribute website to our Uncle Bob and the men of the B-29s during WWII.
Ed is a Professor Emeritus of Psychology, Author, Historian, and Linguistics Editor.
Read more about him at www.edwinlawson.com and be sure to view he and his co-authors website on the 5ooth
Bomb Group, Saipan at www.500thbombgroupb29.org. 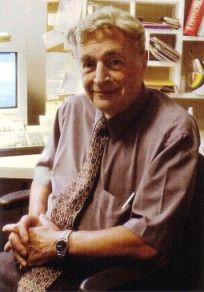 Our friend, Mr. Ed Lawson
"My tail gunner and I claim we shot down a Japanese fighter.  Things were happening so fast that it is difficult to see what happened to the fighter.  It was more important to watch for the next attack."

CFC gunner Edwin Lawson's statement of mission on 3 December 1945.
MEMORIES OF A CFC-RING GUNNER ON A B-29.....ED LAWSON.

The 882nd  had started with 10 crews.  Many were lost as were some replacement crews.  By the end of the war, a total of 13 crews had been lost.  We took tremendous casualties.

**To be selected for flying status on a B-29, students had to score at least 120 on the Army General Classification Test, the AGCT.  Ed stated most of the boys with him were 19-20 years of age.

I was in my second semester of studies at the University of Illinois when I was called to active duty in 1943 with the USAAC.  I flew 35 accredited missions on B-29s from Saipan in 1944-45 and was awarded the Distinquished Flying Cross, the Air Medal with 3 Oak Leaf Clusters, and a Purple Heart.  After going through 2 armament schools, air-to-air gunnery school, and finally the CFC school at Lowry Field, I was assigned to Major Barney Hurlbutt's crew of the 882nd SQ., 5ooth BG around June of 1944 which was then training at Walker Field in Victoria, Kansas.
( I was a replacement for a crew member injured in a crash landing.  He had jumped out of a training plane, a B-17, as it crash landed on the runway with an engine on fire.

John Ciardi, good friend, fellow CFC gunner, and who shared a bunk next to Ed Lawson in his quonset hut on Saipan described the comaraderie of the crews thusly:  "The unit was the crew. You belonged to eleven me.  You're trained together.  You're bound together.  I was once ordered to fly in place of a gunner who had received a shrapnel wound.  I
dreaded the mission.  I didn't know those other people. I didn't want to run the risk of dying with strangers."

*Ed Lawson was in one of the first groups to be selected for the Central Fire Conrol (CFC) trainingat Lowry Field, where they were being prepared to fly the new B-29 being built.

At Walker Field, we trained intensely for months on B-17s doing what other crews did.
My first experience on the B-17 shortly after my arrival shook me up.  A more experienced crew member checked me out on my oxygen mask and then took a nap.
After a few minutes, I looked over and saw that his oxygen hose had become disconnected.  I called another crew member and we did manage to revive him.

Finally, after what seemed like months, the B-29s arrived and we trained on them.  In about October of 1944, we went overseas after having first staged at Lincoln, Nebraska.
We stopped in California at Mather Field and left for Saipan.  I will never forget flying over the Golden Gate around
midnight and wondering whether I would ever see it again.

Upon arriving on Saipan, we were briefed for the first mission over Tokyo by B-29s from Saipan on 24 November 1944.  We were told to expect 650 fighters.  They also told us if we had to bail out, we should go to the Emperor's Palace, that he would protect us. Can you imagine bailing out and asking pedestrians for directions to the Palace and in English?
It turned out on this mission that on take-off my plane blew two tires, so we had to turn back.  As it turned out there were not fighter attacks on that first mission.

We were not scheduled for the next raid but one a few days later, 3 December 1945.
On that one, there were many fighter attacks.  We reported 65 on our plane alone.  My tail gunner and I claim we shot down a Japanese fighter.  Maybe, another crew helped too.
Things were happening so fast that it is difficult to see what happened to the fighter.
It was more important to watch for the next attack.  In any event, there were more attacks on my first mission than any other.

Fighter attacks by solo Japanese aircraft:  Ed states that "if they had attacked in pairs as American pilots were taught, we would have really suffered because we could fire at only one plane at a time.  Our training was to fire at the closest plane.  If the Japanese had come in pairs, the second plane would not have drawn fire."

But on a lighter note:  John Ciardi reported that Ed's radio "is out of order."  Ed said it was a small Emerson table model that he had managed to get safely overseas. "Having a radio is a small luxury.  It provided us with a bit of entertainment until one of it's tubes died."
Fortunately Saipan had its own radio station, and Ed said that "we did hear Japanese broadcasts but never heard a female announcer introduce herself as Rose." 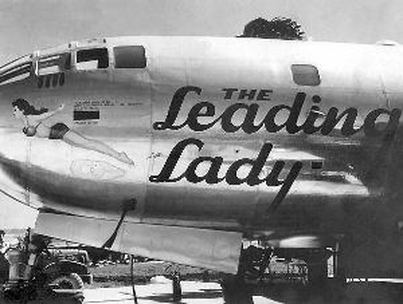 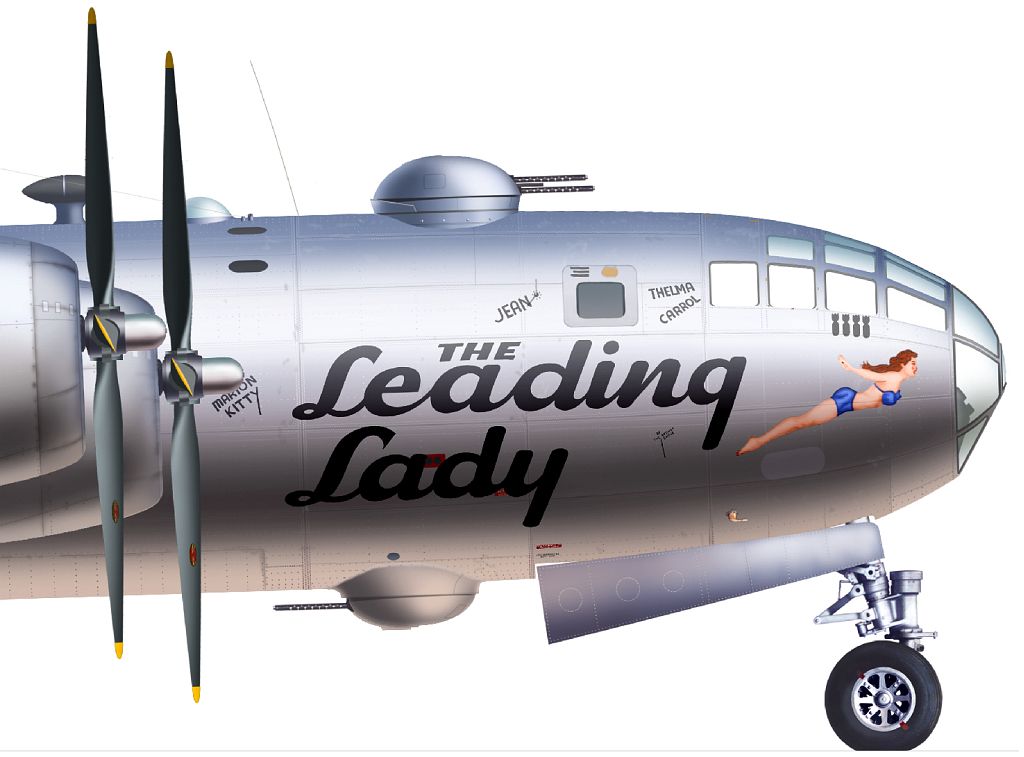 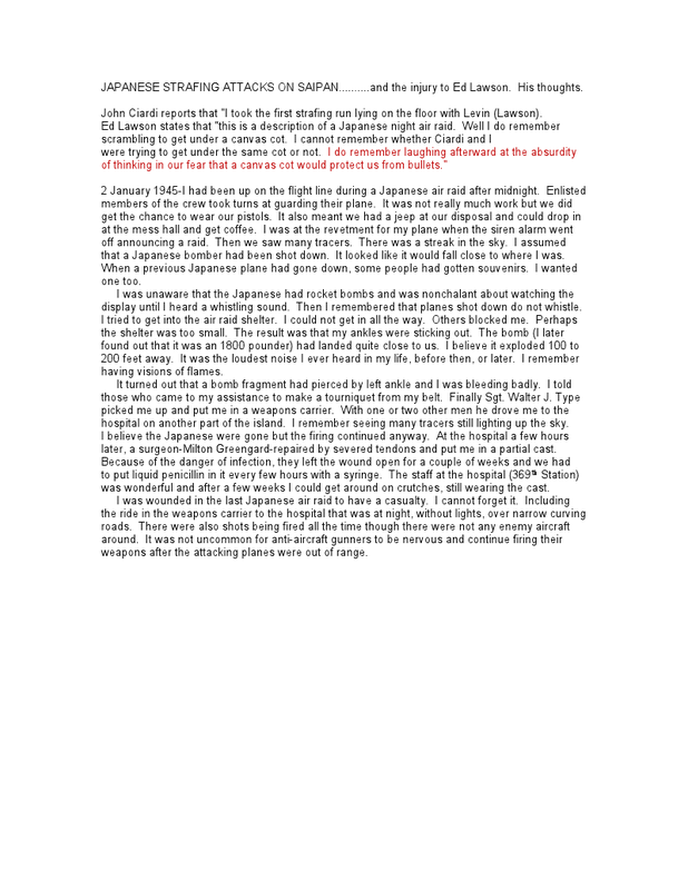 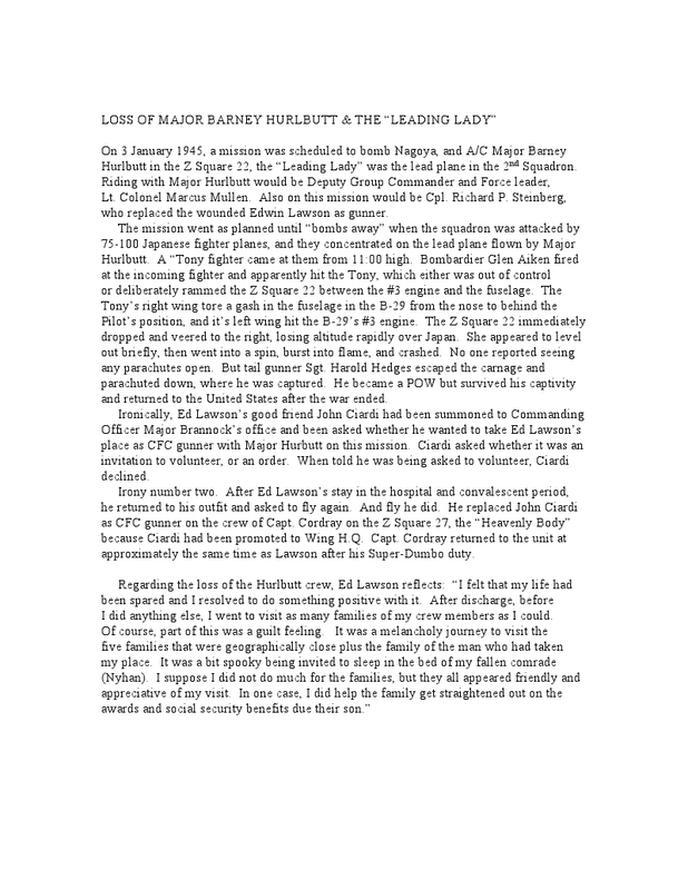 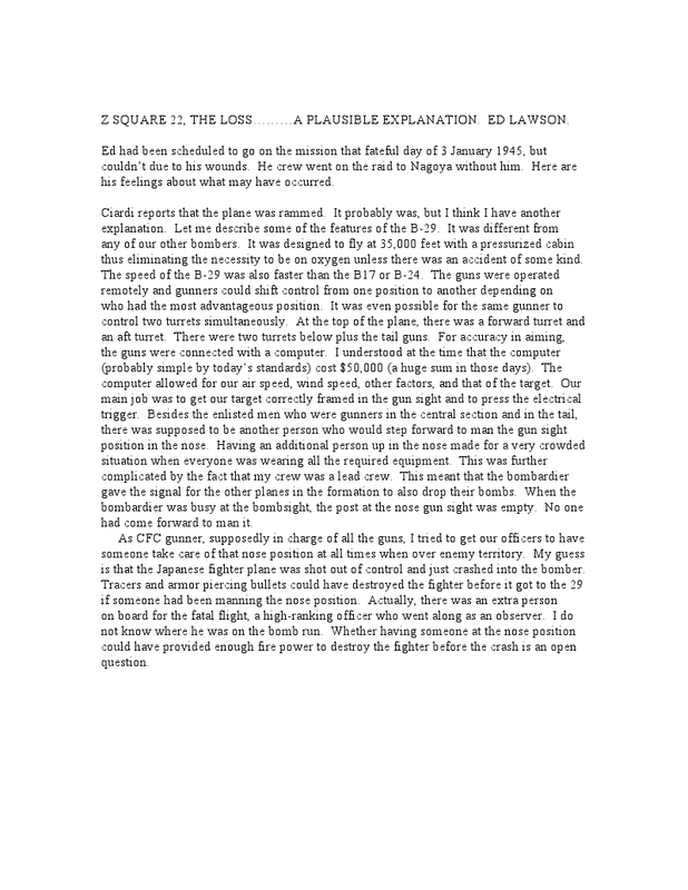 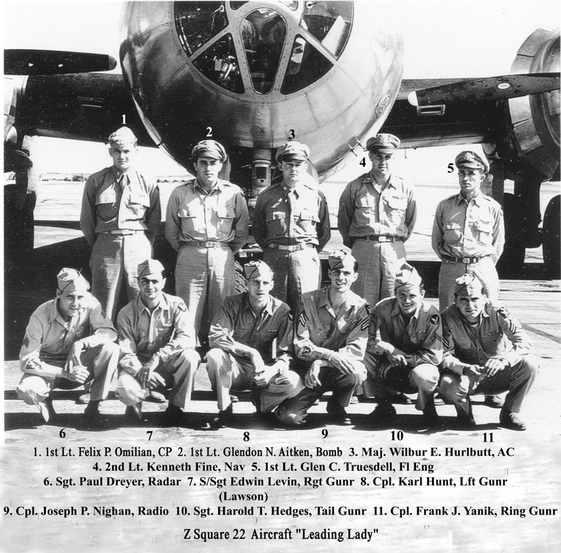 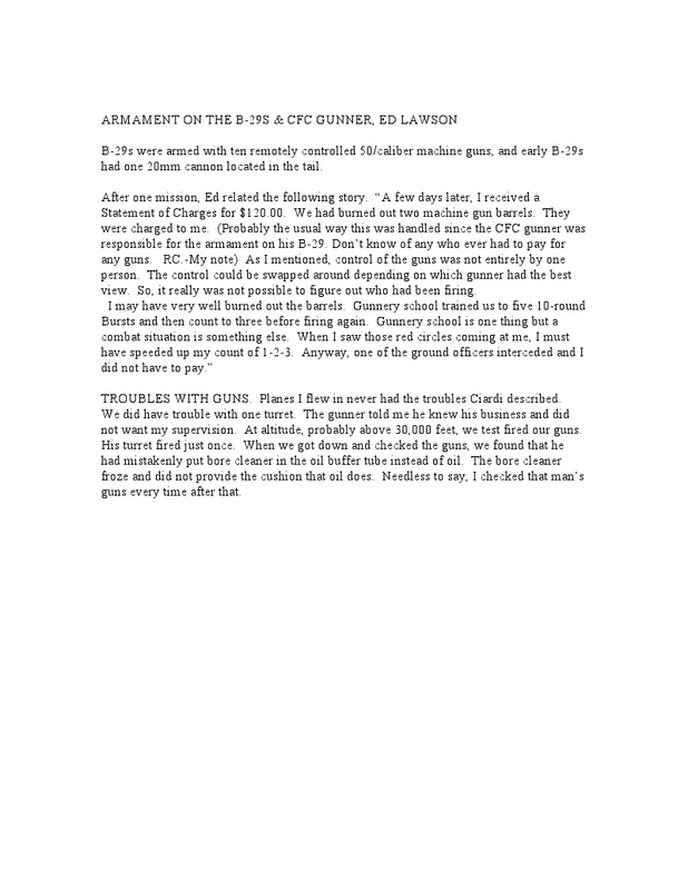 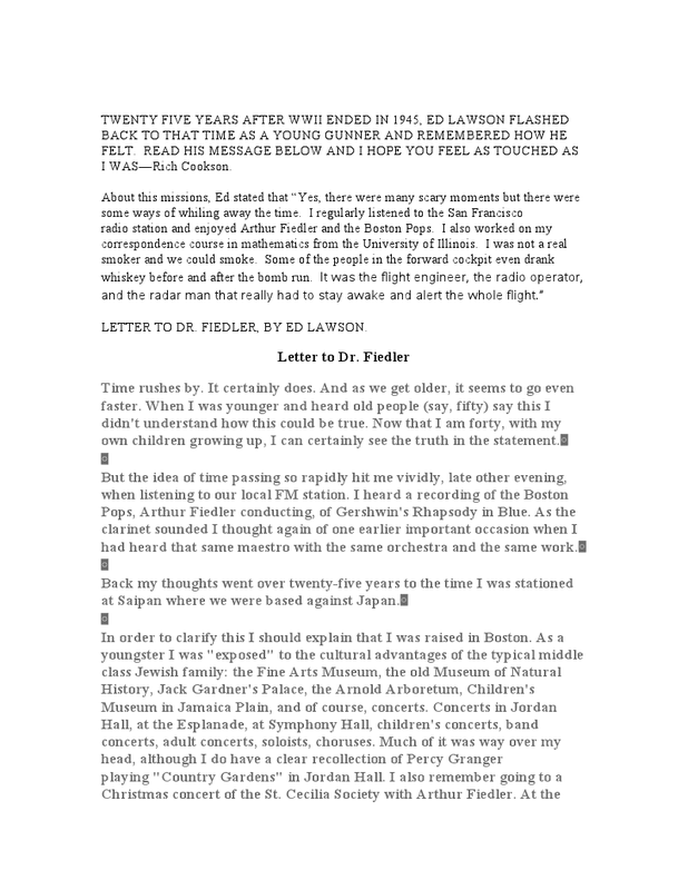 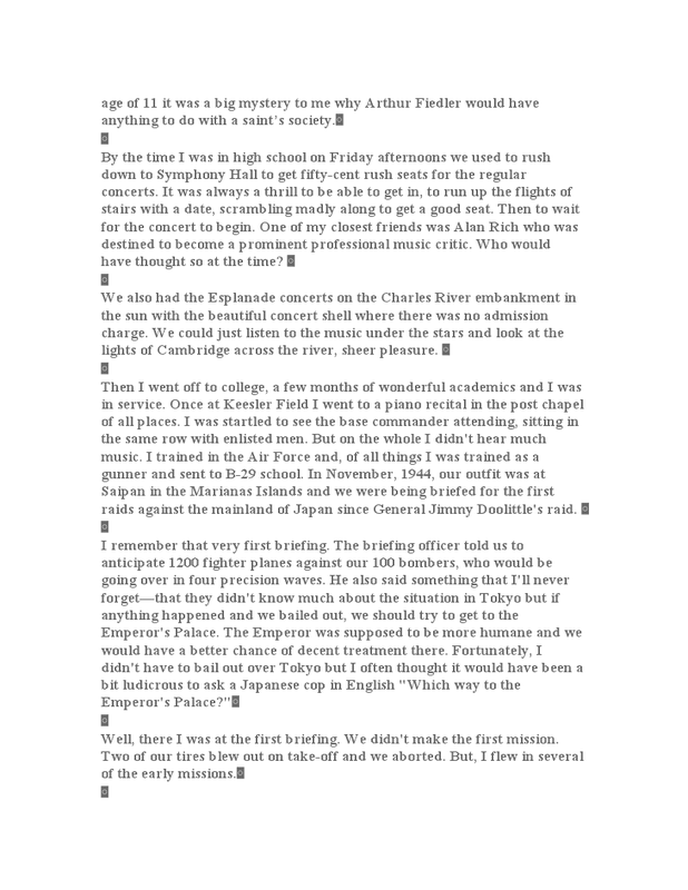 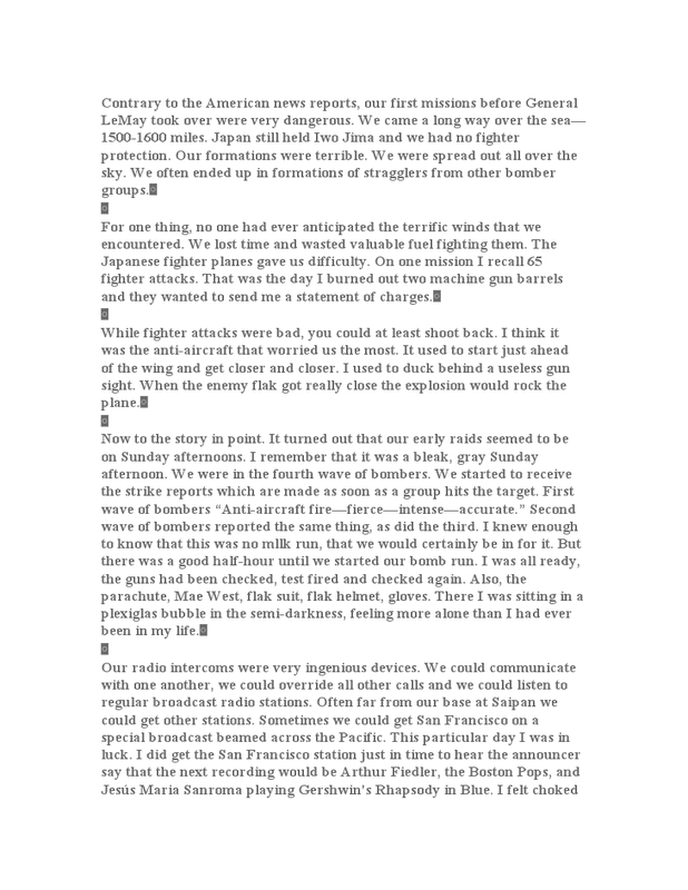 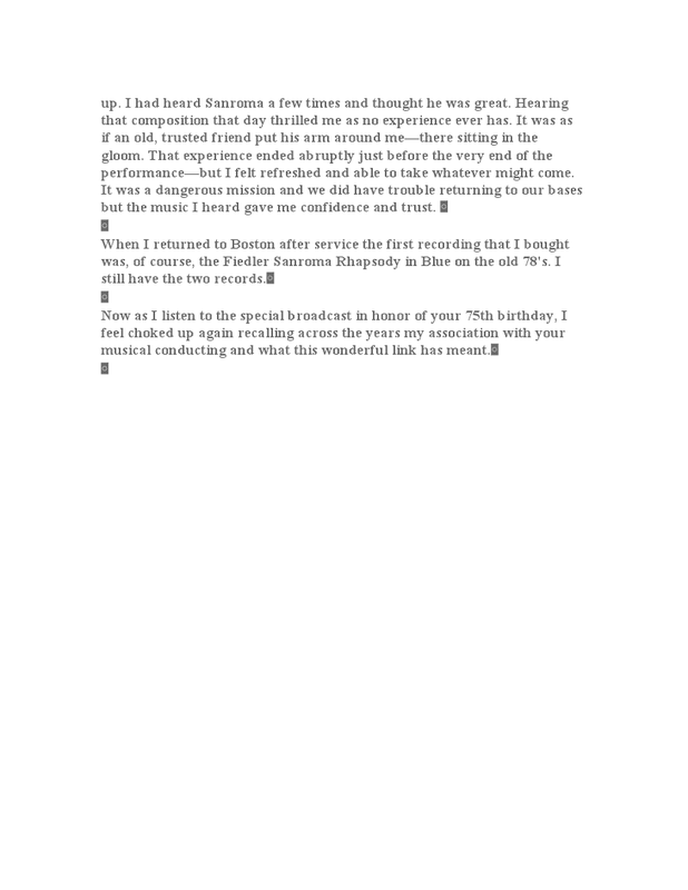 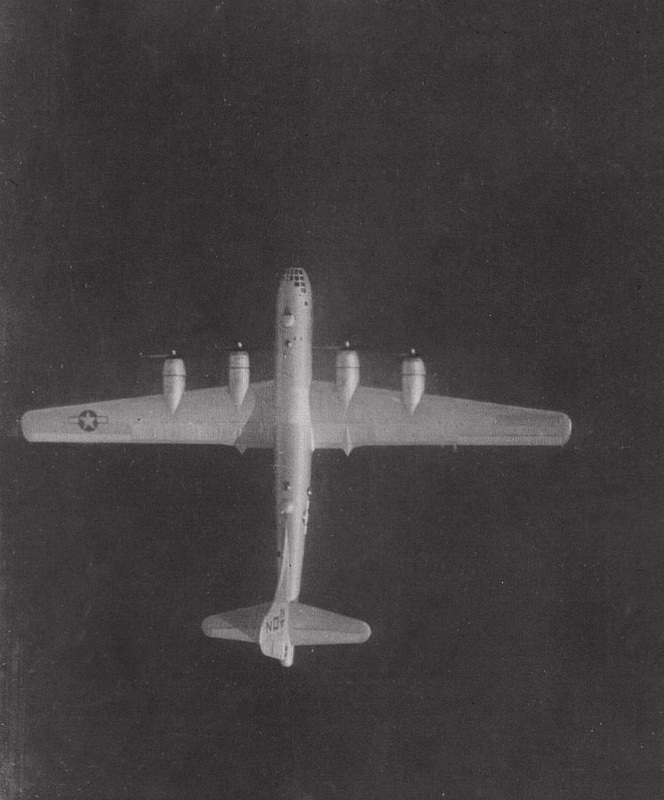 Z Square 42, the "Supine Sue", in flight. Photographed by Ed Lawson with his brownie camera from his blister gunners position.
PERSONAL TOUCHES ON SAIPAN.

Ed stated that "we had unusual method of heating water for shaving.  We took #10 cans, filled them about two-thirds full of sand.  Then we poured gasoline in and lit it.  We got good hot water."

Ed said his buddy Tiger Johnson was "one of those restless individuals who always had to be doing something.  He, Ciardi, and I built a porch with a roof on it at our end of the barracks.  Then Tiger and I went about locating (stealing, but we called it 'moonlight requisition'), plywood so that we could build a ping-pong table." 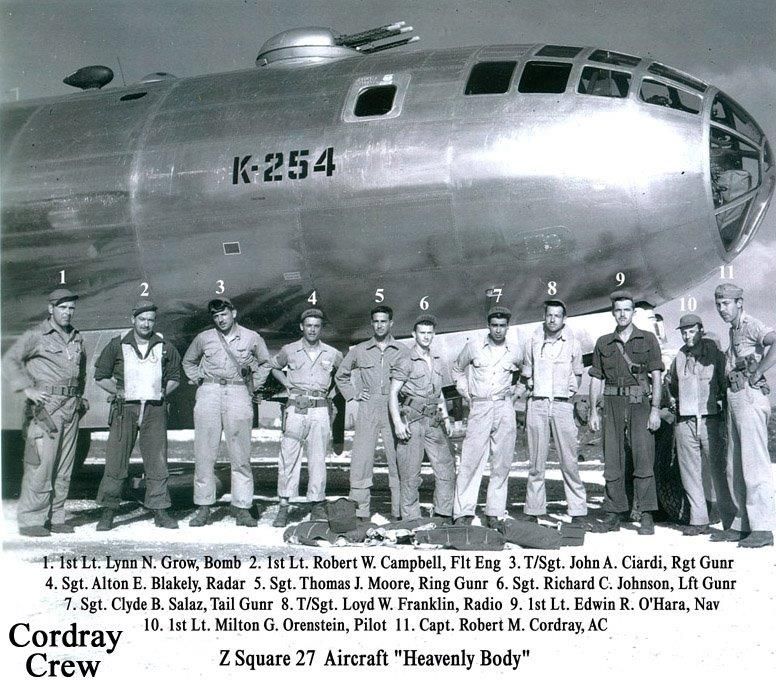 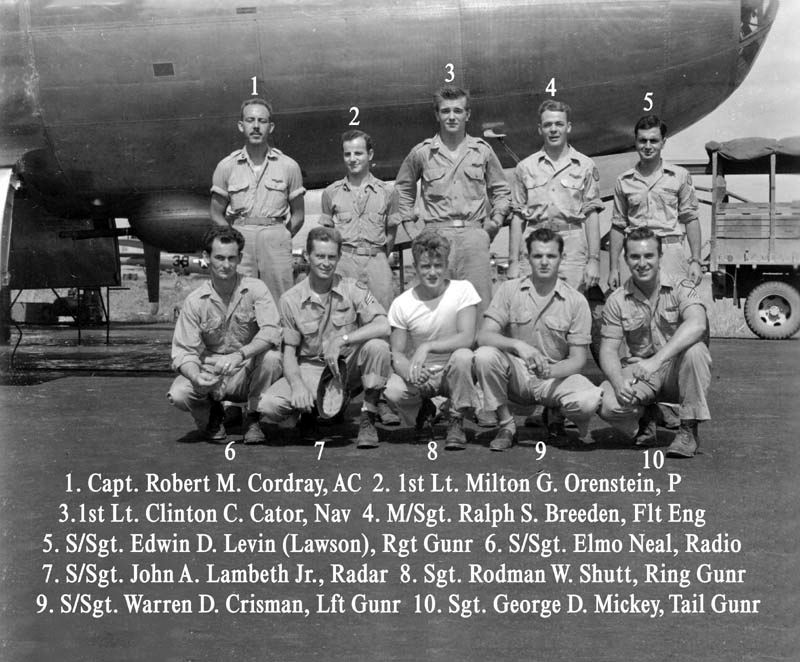 Ed Lawson, position #5, replaced his good buddy John Ciardi as gunner on the Cordray crew. Ciardi, as seen in previous Cordray crew photograph, had been promoted to Wing H.Q.
Ed Lawson first flew with the Major Barney Hurlbutt crew on Z Square 22, the "Leading Lady" and then with Capt. Robert Cordray crew on Z Square 27, "Heavenly Body."
Below are excerpts from an article Ed wrote in 1983 about naming the bombers.

The current wave of nostalgia is also of interest to onomaticians.  Let us go back to WWII and the B-29 bombers that operated out of the Marianas and attacked Japan.

Many people, of course know about the Enola Gay, the B-29 that dropped the atomic bomb on Hiroshima.  What may not be generally known is that virtually all combat B-29s had distinctive names.

There is quite a precedent for the naming of airplanes:  Lindbergh's Spirit of St. Louis and Wiley Post's Winnie Maie are just a few.  Boats and ships are named.  Some people name their cars, some their homes.  Truckers even name their vehicles.

I was a member of the 882nd Squadron of the 500th Bomb Group of the 73rd Wing based on Saipan.
My original plane was Z Square 22.  How did the naming and identification work?  In training in the United States there were no markings at all.  The markings appeared only when the planes were
prepared for combat overseas.

At first, members of the flight crew were allowed to have a name of someone (usually a wife or girlfriend) painted on the fuselage at the person's position (though one individual had the war cry Oskee-Wow-Wow of the Fighting Illini painted at his position).  The names of ground crew personnel were also sometimes painted on the plane.

Shortly after arrival overseas, the planes blossomed with distinctive nose art. This would have been around November-December, 1944 for those based in Saipan.
A few months later, there was a brief period when the pictures were ordered removed, but the order was apparently revoked or ignored because most of the nose art stayed on.

Most of the air and ground crew assigned to a plane preferred to refer to it by its distinctive name such as Supine Sue, Slick Dick, or Leading Lady rather than by Z Square 27 or A Square 10.

Most of the drawing were attention-getters and servicemen from all branches from all over the islands would come to the airfields to see the various examples.

There was quite a bit of pride associated with the plane, its name and drawings, and its combat records by air and ground crews. I was able to obtain 116 photographs of the approximately 1000 B-29s that were
combat-ready.  About half of the drawings have a theme which is rather saucy or sexual.  Another major category is Cartoon/Caricature.  Other categories include: Whiskey, Unique, Persons, Logo + name, and Name only.

What motives were served by the nose art?  Certainly, many show a sexual need, aspiration or desire.  But there are other motives as well.

Some of the names probably served more than one motive.  In any event, the naming of the airplanes was clearly an important morale factor.  Attaching a name to a war machine was merely one attempt to humanize a brutal war-
(out of an original 10 airplanes, my squadron lost 13:  this includes replacements that also went down).  By naming objects in his world, man attempts to show possession and some form of control.