Richard A. Field of "Draggin' Lady"

Richard Andrew Field was born June 13, 1919 in Macon, Missouri.  One of four brothers, he grew up in a number of small rural towns in southern Ohio and Missouri.  His father was the elected prosecuting attorney for Caldwell County, MO and his mother was the daughter of German immigrants who had settled in the area and continued farming as they had in the old country.

Dick spent many of his youthful years as would any small town boy of the time – school, paper routes, and the rare treat of ice cream.  He became fascinated with the prospect of man’s flight and spent many hundreds of hours constructing model
aircraft out of balsa wood.  Some were for static display and some actually flew under rubber band power.

After public school, Dick enrolled in Wheaton College near Chicago. During his second year, he had an opportunity to take flight instruction at Northwestern University under a Government program to train civilian pilots, with a likely concern for national defense needs soon to come.

Fulfilling his life-long dream of flying, he enlisted in the Army Air Corps with the outbreak of World War II and took primary and advanced flying training in Texas, graduating first in his flying class. Commissioned a second lieutenant, he moved on to training in medium and heavy bombers and was stationed in Florida and the Caribbean, flying B-25's on patrol for German submarines.

Later he was trained to pilot B-29's and arrived on Saipan on November 18, 1944.
After three missions, he suffered the effects of battle fatigue and was evacuated back to Hawaii and the mainland US.

The circumstances of his departure from the campaign weighed heavily upon him for many years to come, but his love for
flying and those with whom he served did not cease. His ensuing career in aviation included positions in air traffic control,
aerial navigation charting and mapping, and national airways modernization.  In later years, he gave back to his former air crew comrades by serving as an active director of the 73rd Bomb Wing Association.
- Dick Field Jr.
*Note- all images and documents on this page are courtesy of Capt. Richard A. Field's son- Dick Field Jr., unless credited otherwise. 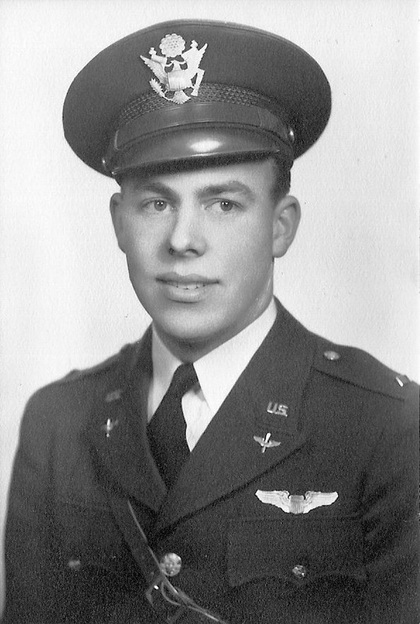 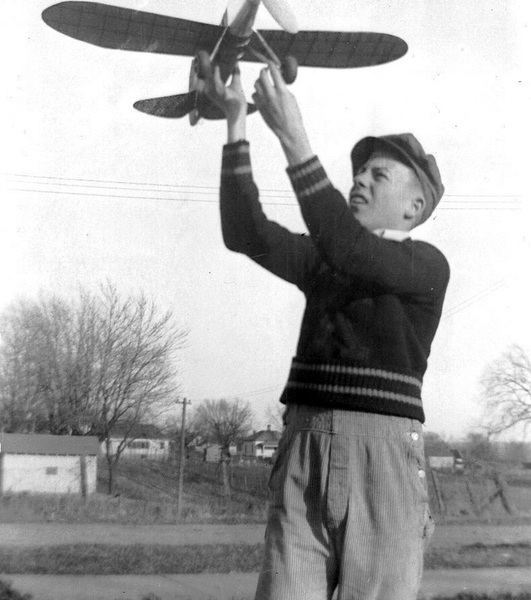 Capt. Richard A. Field as a small town boy, launching one of the many balsa wood and tissue flying models that he made 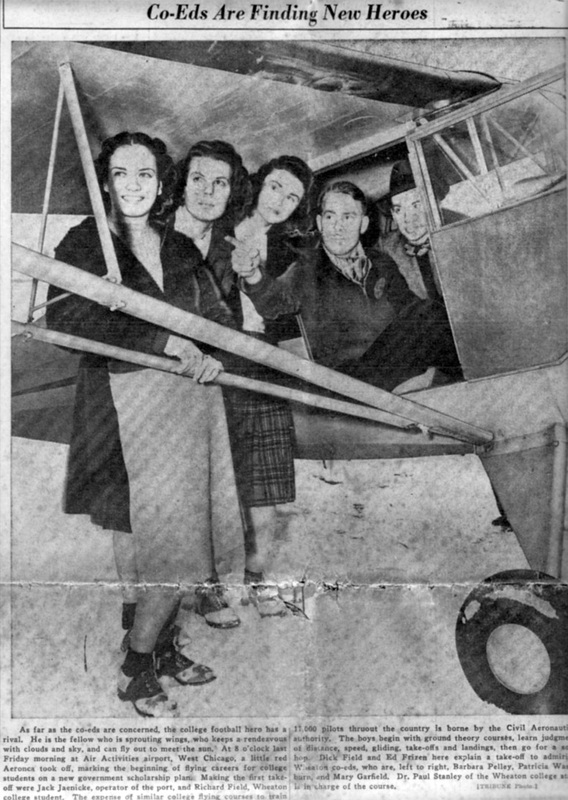 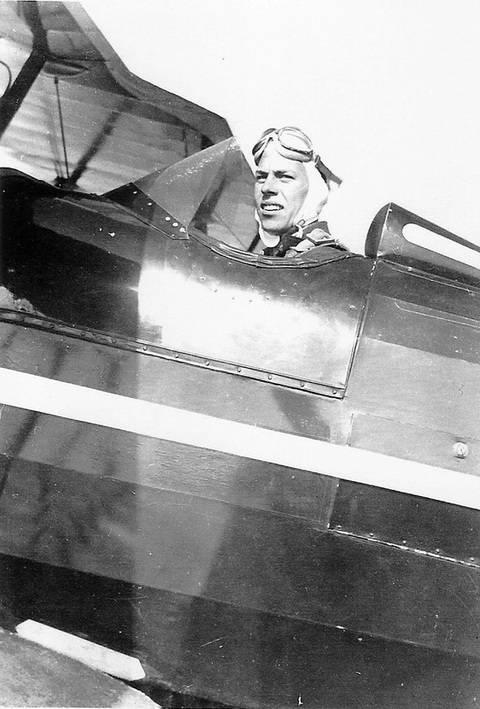 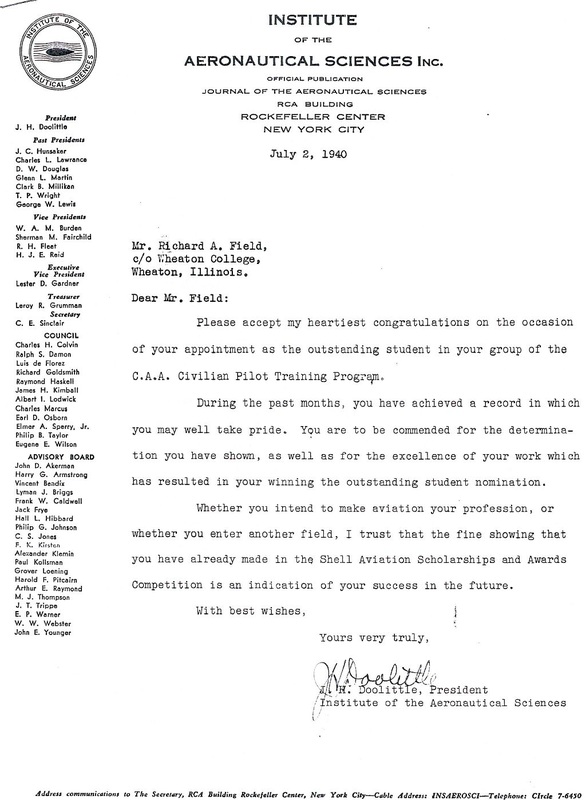 This letter was sent to college student pilot Richard Field by James H. Doolittle, who later went on to lead the famous B-25 raid on Japan from the USS Hornet, April 18, 1942 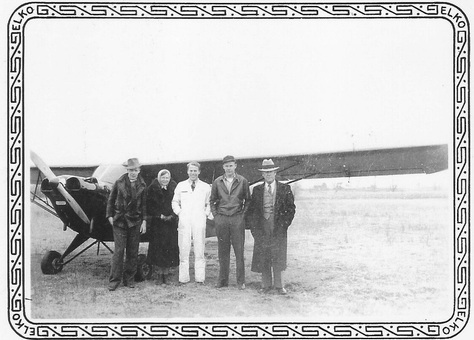 Capt. Field had rented a plane in Naperville, IL and flown home to Hamilton, MO for Christmas.

He is shown with his parents and two of his brothers.
He ended up taking the plane up eight times, giving flights to family and neighbors

[Unknown Source], July 17, 1941
Account of a ferrying flight on a B-18, with 2nd Lieutenant Richard Field as co-pilot -
and an unexpected historical twist only discovered 44 years later 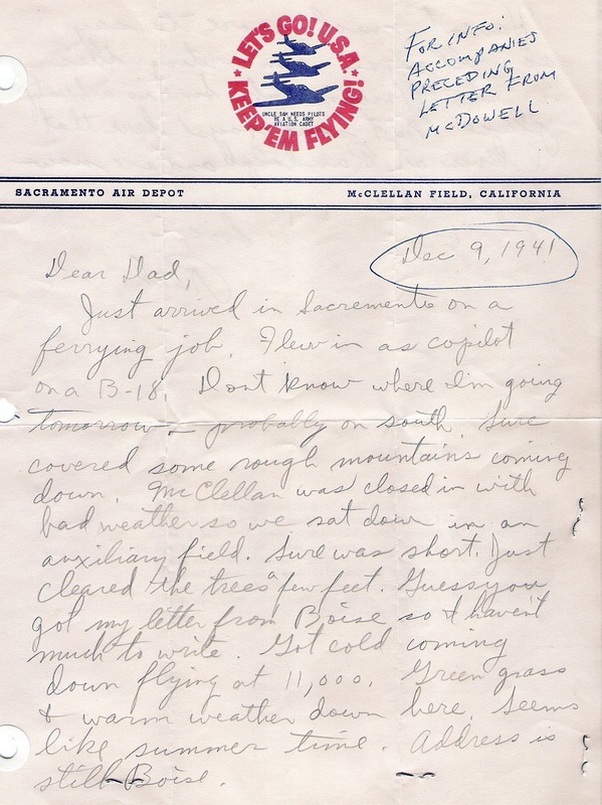 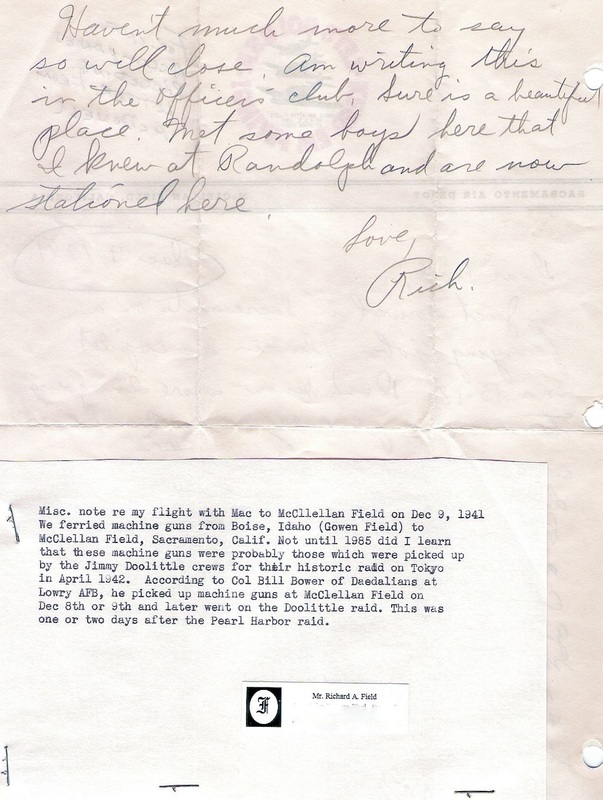 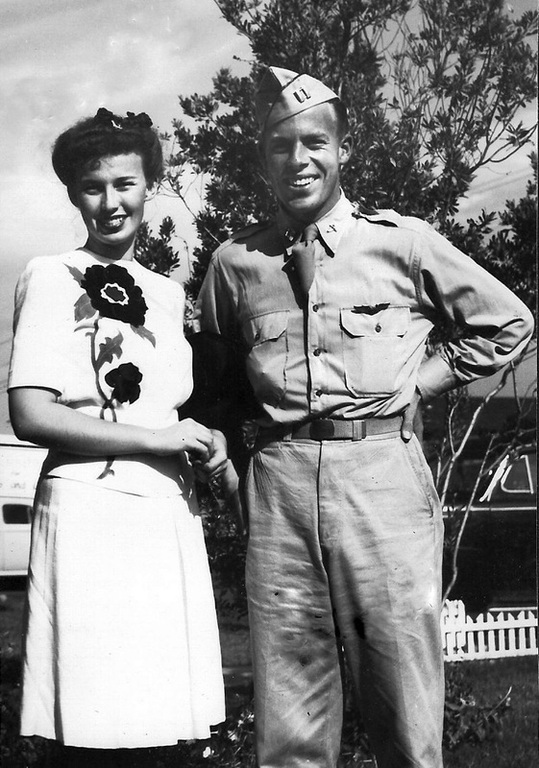 Capt. Field and his wife Gwen. Wedding plans had to be accelerated due to orders to leave for overseas duty
Hurricane Flights as compiled by Capt. Richard A. Field 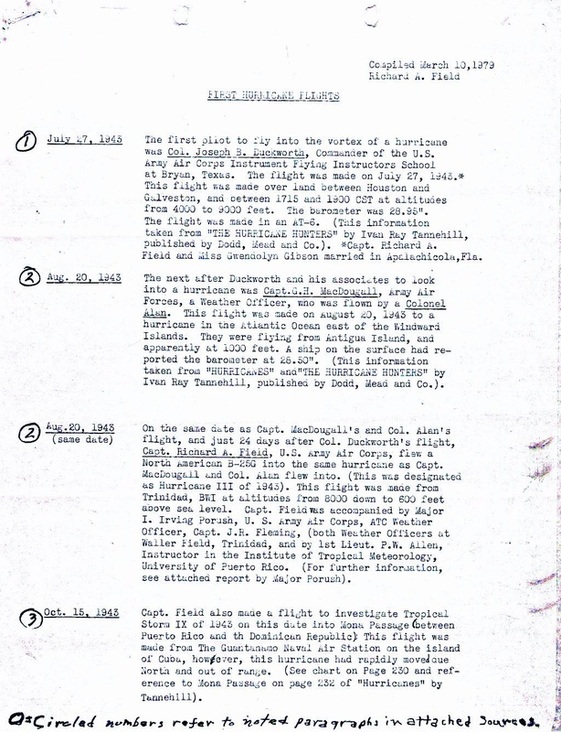 Partial record of one of the first scheduled flights by an aircraft into a hurricance, by Capt Field and weather officers on board. Pg.1 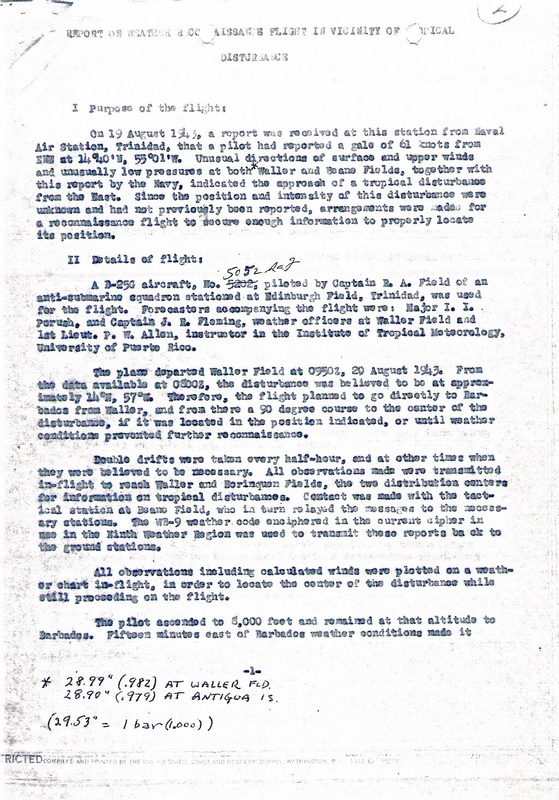 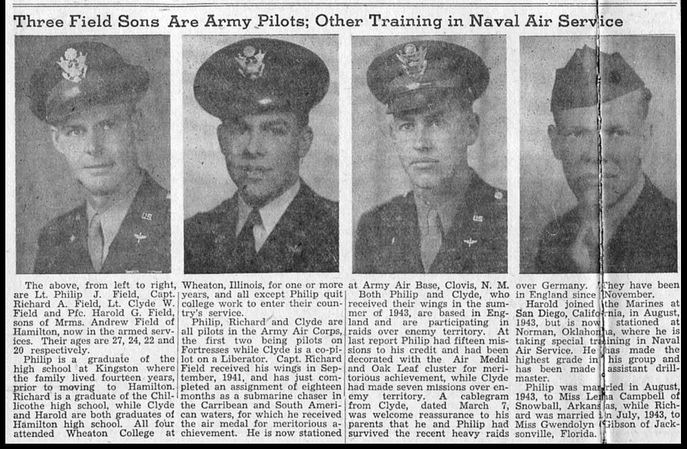 Appeared in the Hamilton [MO] Advocate - Hamiltonian, Mar 16, 1944. The Field brothers were representative of many American families at the time who saw more than one son or daughter volunteer to defend their nation 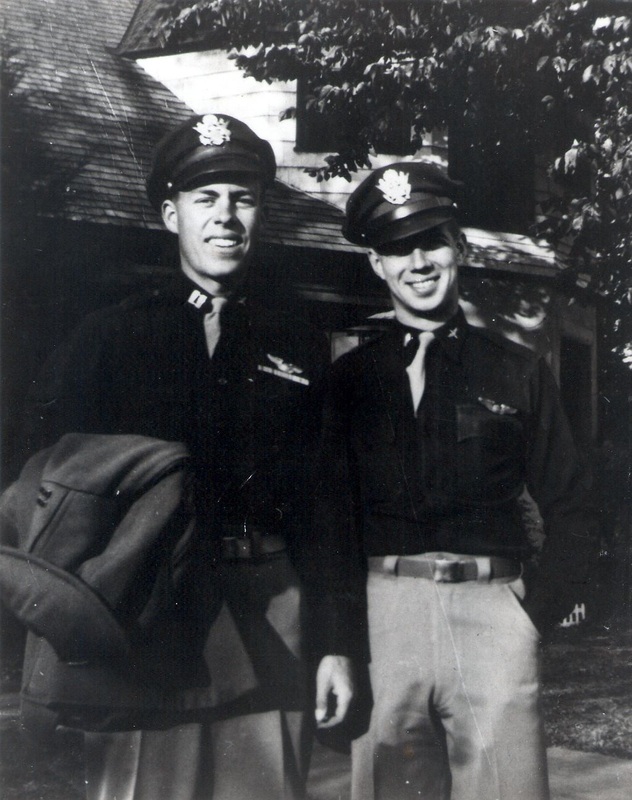 Capt Field and an unidentified fellow flight officer. (The unidentified officer is believed to be Lt. Dodds-we are awaiting confirmation if possible)
The story of Capt Field's and Lt Dodds' flight in a war weary B-17 under very
adverse weather conditions. A tale of flying by geography in the American heartland 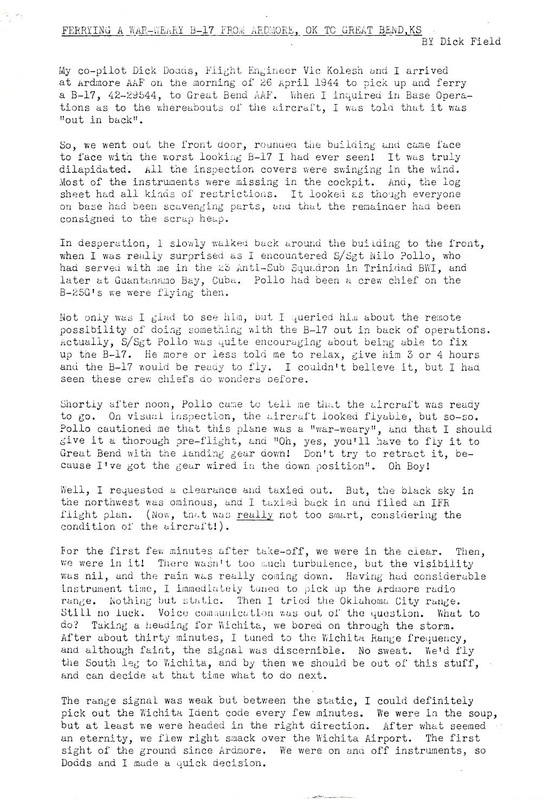 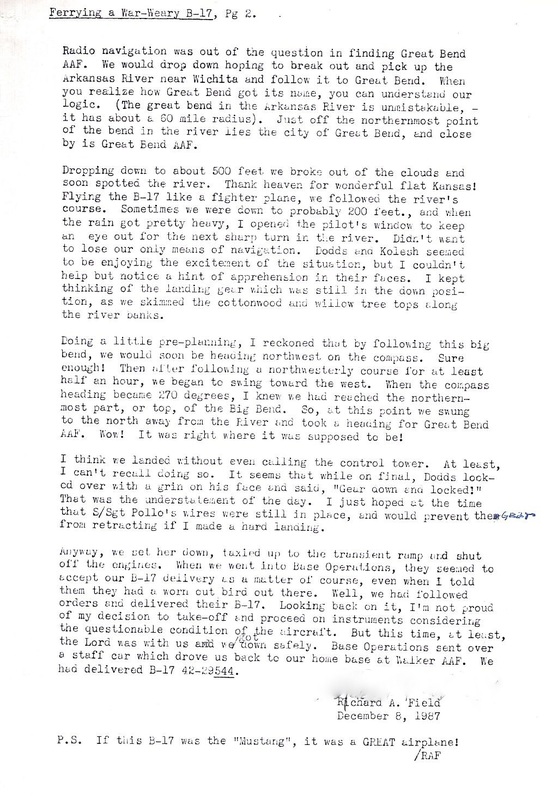 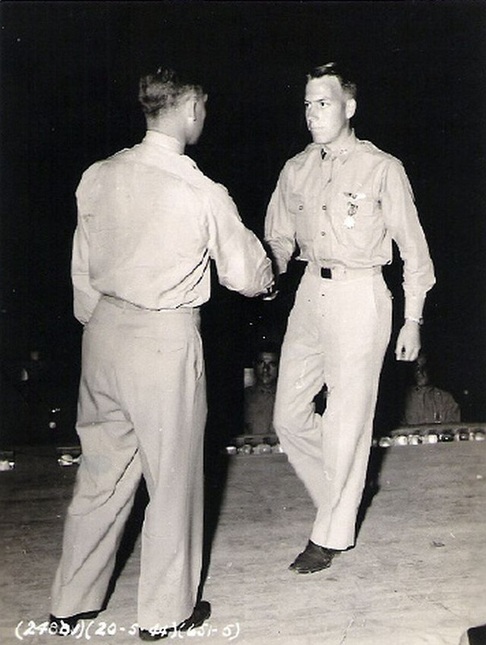 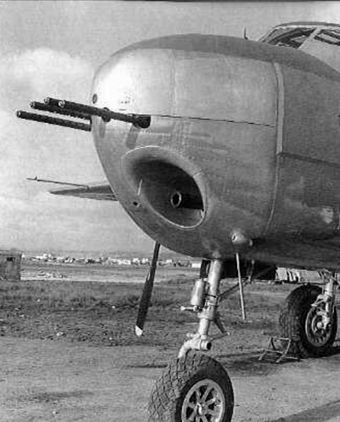 B-25 with 75mm cannon and 50 caliber machine guns like the one flown by Capt. Field out of Cuba while on submarine patrol duty in the Atlantic 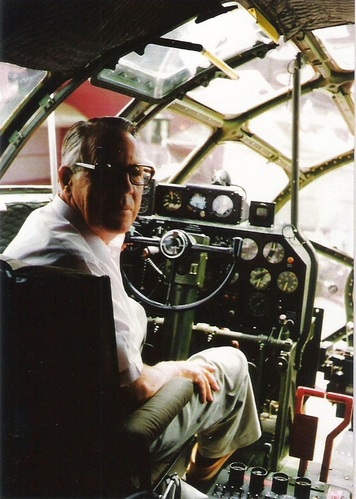 Capt. Richard A. Field sitting in the pilot's seat of
T Square 54, under restoration at Lowry AFB, CO.  Capt. Field was the 73 Bomb Wing Association Project Director for the restoration project.

When Lowry was deactivated, the aircraft was relocated to the Museum of Flight in Seattle.

The complete story of this project is found at http://user.xmission.com/~tmathews/b29/b29.html
Significant dates in the military flying record of Capt Field 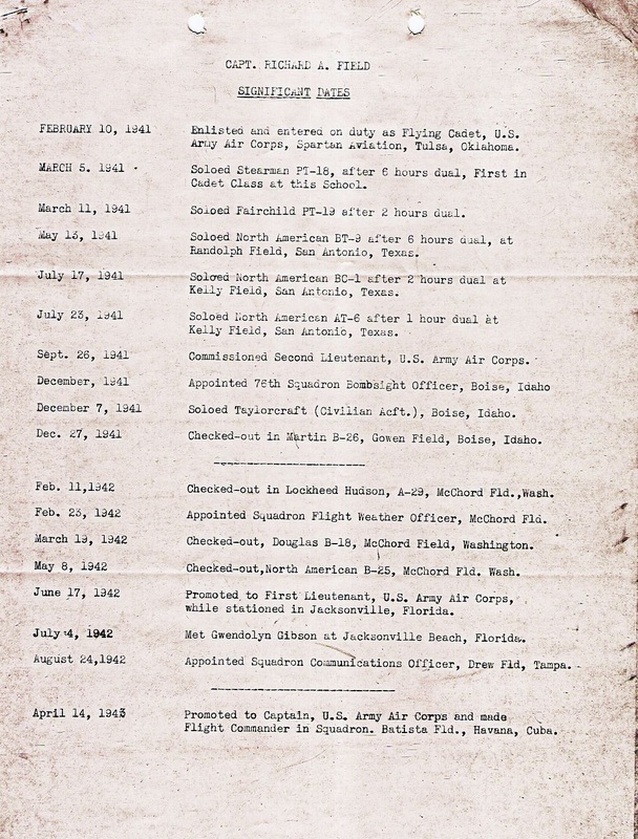 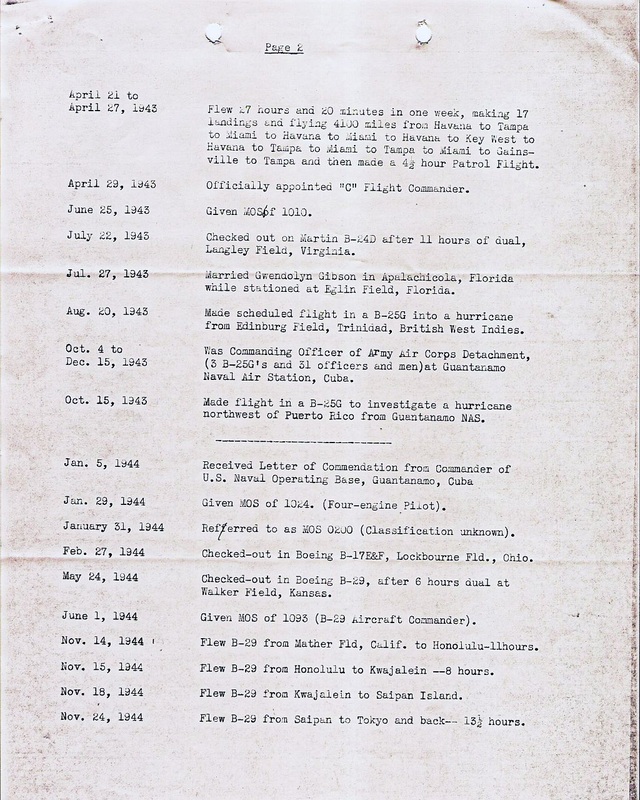 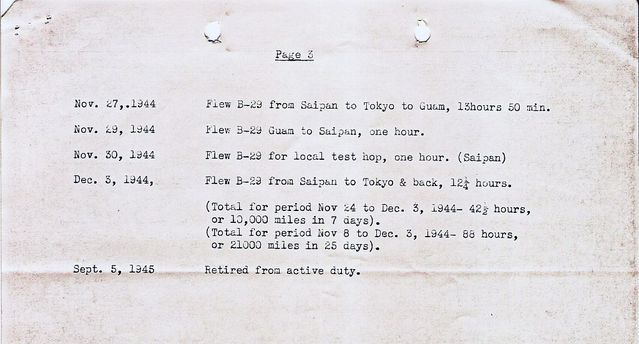 Pg.3
Feature article by Jean Gray appearing in the Haxtun-Fleming Herald (Colorado), August 11, 2004.
(Technical correction:  it was the B-25 that had a cannon that fired out the nose.) 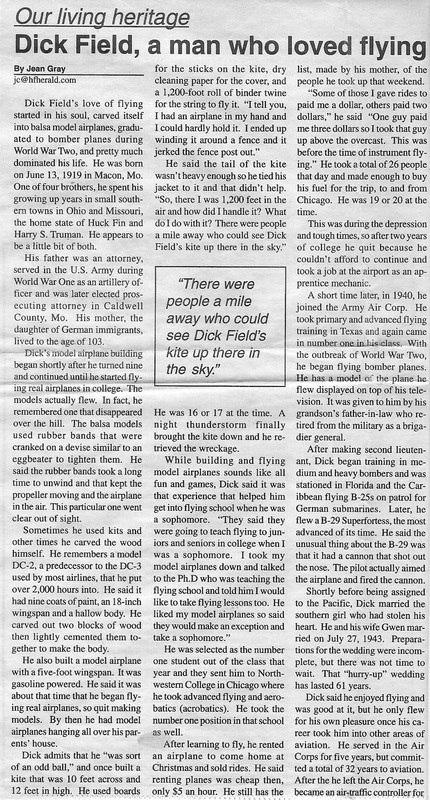 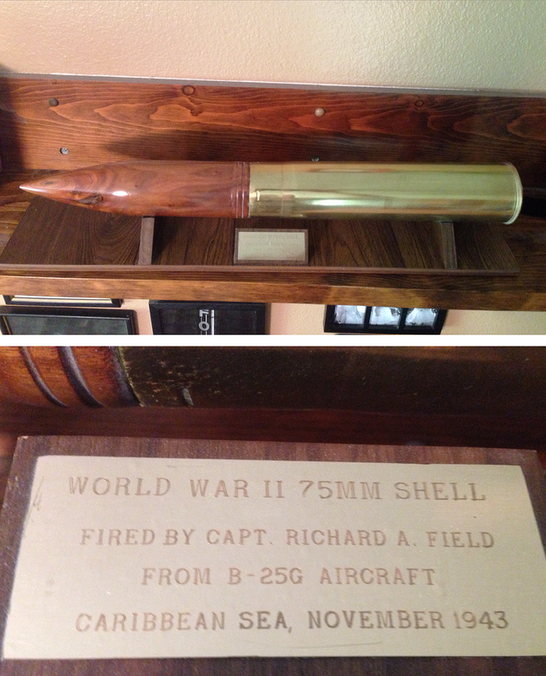 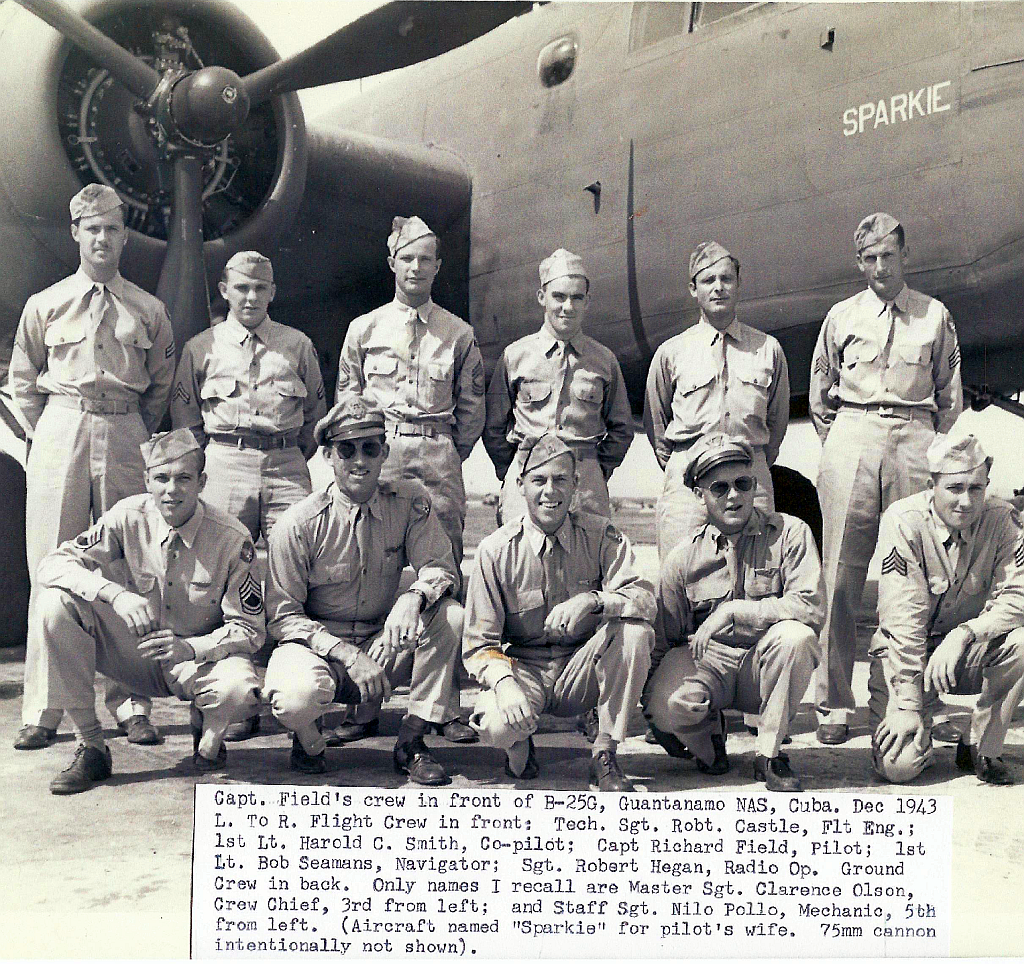 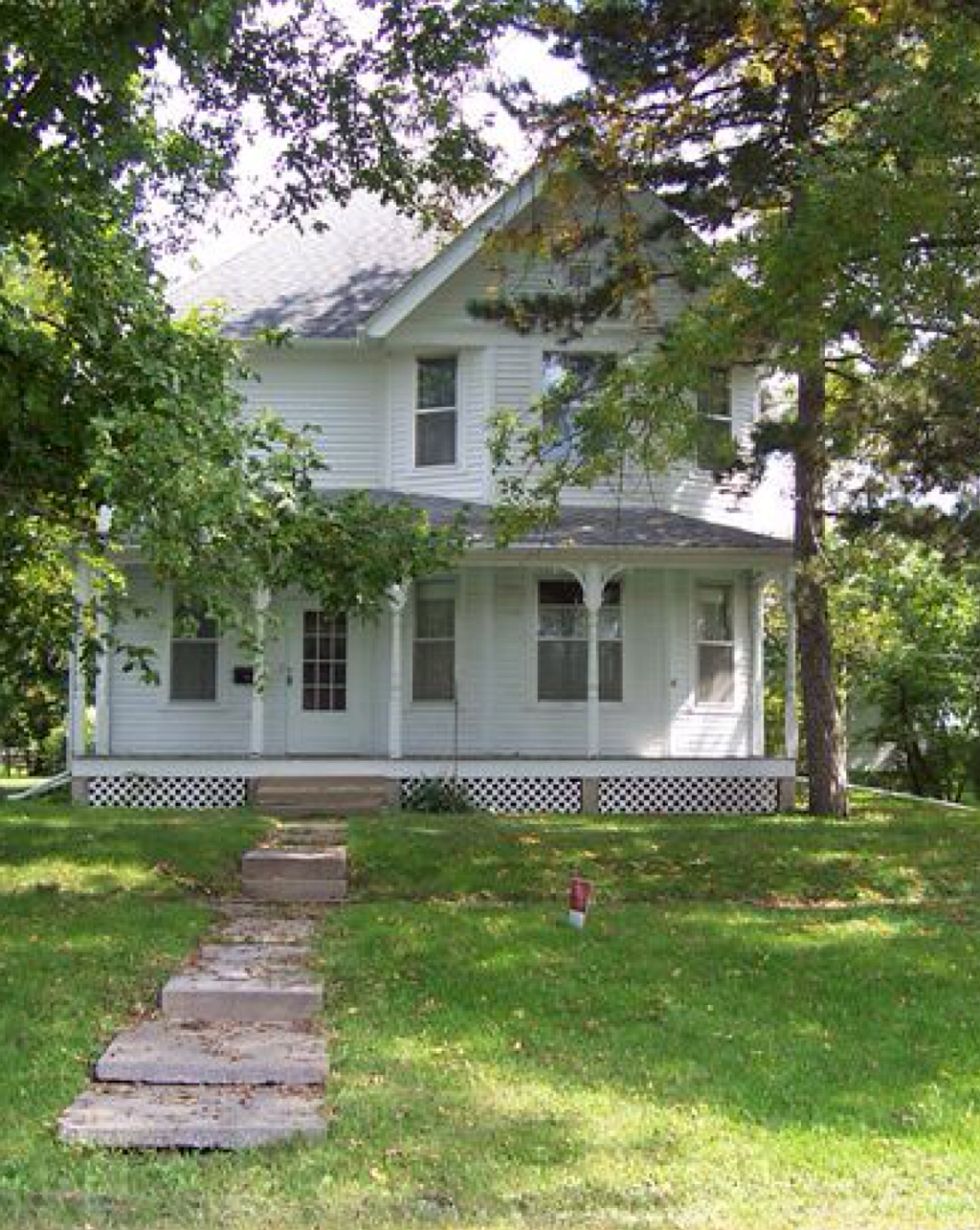 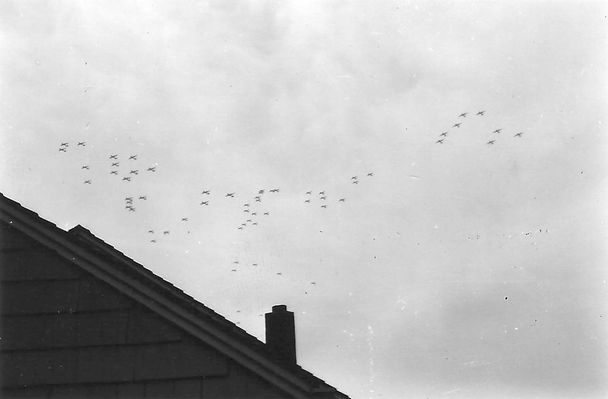 Large formation of 63 B-29s flying over Independence, MO. Not sure what the nature of this mission was. Dick Field took it sometime in the late 1940s after the war. If they were B-17s, it could have been a scene in the skies over wartime England. It is a sight which I am sure hasn’t been seen since in peacetime in this country - and doubtful such a formation of bombers of any kind will ever be seen again. (courtesy D. Field)