On March 29, 1945 – quite touching – Luke [George Lucas, Z-8 Crew Chief] tells Dad that he thinks Fitz would have come back if Dad had been along.  There is no finer compliment he could have received from his good friend, but both men knew that was just wishful thinking. Of course, we know now that there is nothing that Dad or anyone else could have done to change the outcome, but after a tragedy we always second guess.  It is how we deal with grief.  At  that time – just a couple weeks later no one really knew.  Dad had said he did not know exactly what happened to his crew until he read the article in The Retired Officer Magazine in the 1990s.

Touching sentiments from Linda Connor Sledge regarding the recollections of her father.
Left Gunner John L. Cutler was carrying the St. Christopher medal given to
him by  Crew Chief George Lucas the night he was KIA. 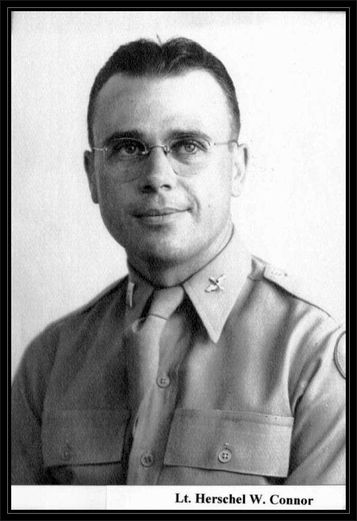 Herschel Connor was one of the original members of the Robert Fitzgerald B-29 crew formed in Victoria Kansas in May 1944. He would fly nine accredited bombing missions w/the Fitz crew before being promoted to captain and to wing headquarters on Siapan for his meritorious service as a flight engineer.
Poignant statement from Linda Connor Sledge about what her father probably felt when he wrote the following letter to Alice Fitzgerald......."It captures what dad was feeling.  Dad was ever the optimist and very positive in his outlook on life.  That spirit comes through in how hopeful he was that Fitzgerald would make it home despite the odds." 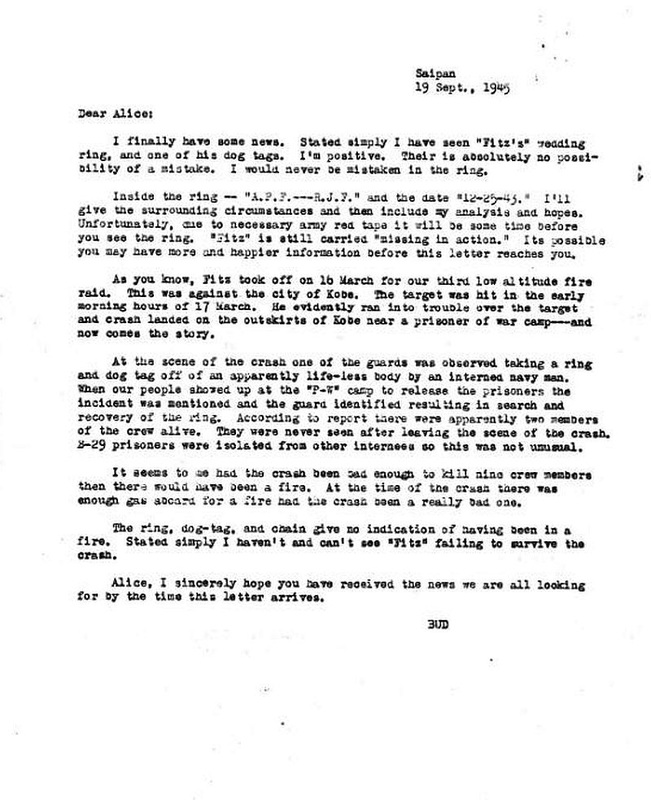 I cannot begin to imagine how hard it must have been for Herschel Connor to write this letter to Alice Fitzgerald. Alice was the wife of A/C Robert Fitzgerald of the Z Square 8. Herschel was Fitzgerald's best friend and had just identified Fitz's effects 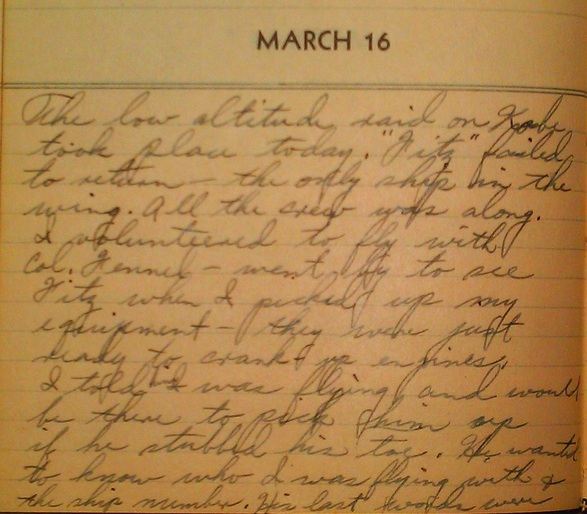 Diary entry 16 March 45. This daily diary entry expresses the respect and fondness that captain Connor felt for his A/C Robert Fitzgerald and the crew of the Z square 8. It was Fitz who insisted that captain Connor leave his crew and take the promotion to wing headquarters, thus saving his life. 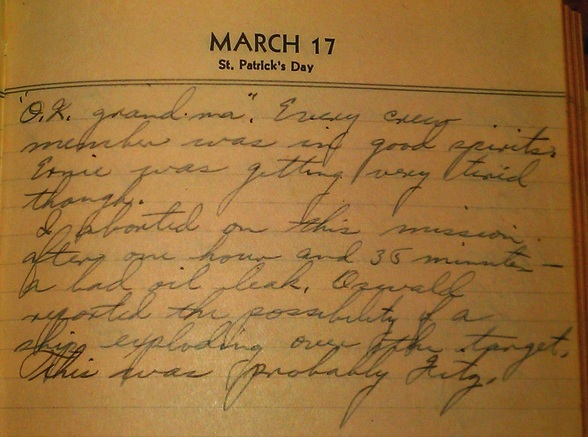 Diary entry 17 March 45. This diary entry relates to the loss of his crew over Kobe 17 March 1945.
The following is the biography of the life of Herschel Connor:

Herschel Connor was born March 13, 1913 in Lewistown Township,  Illinois to Ralph and Blanche Connor.
He was the second oldest of 8 children and one of 5 brothers who served in WWII.  His father was a farmer and his early years were spent on the farm. When he was a child the family moved to Dallas, TX.  At the age of 12 his family returned to
Canton, Illinois.  He stayed in Texas to help his Aunt Mamie and Uncle Francis Peitz.
He always claimed Aunt Mamie bribed him to stay with a bicycle, but Aunt  Mamie promised his mother she would make sure he got an education.  A promise that she kept.

Herschel graduated in 1931 from Oak Cliff High School in Dallas. In high school he was a member of the ROTC, the Rifle Team, and the football team.

Following high school he worked with his uncle as a plumber’s apprentice.  Four years later he started college.

Herschel attended Texas A&M where he was a member of the Corp of Cadets.
He graduated in 1940 with a degree in Mechanical Engineering.

Upon graduation he was commissioned a 2nd Lt  in the Army Engineer Reserves.
After a brief stint at Lone Star Cement Corp. he reported to Chanute AFB in Dec. 1940 as a civilian instructor in aircraft
hydraulics.

He was assigned to the 881st Bomb Squadron, 500thBomb Group and was the first Flight Engineer on
“Mission to Albuequerque” led by A/C Major Robert Fitzgerald.

They arrived on Saipan Nov. 1944 and participated in the first raid over Tokyo later that month.  He flew  10 combat missions with this crew.  The “Mission to Albuquerque” often assisted damaged aircraft on the return trip home.
On the Feb. 19 Tokyo mission they flew cover and stayed with Lt Pearson’s damaged aircraft,“Holy Joe”,  and
escorted it back to Saipan where it fell apart on landing. The mission flew for 17:45 hours on 14 hours of fuel.
For this flight and others Maj. Fitzgerald received the Silver Star and Herschel was promoted to Captain and reassigned to Wing Headquarters.  He told Maj. Fitzgerald that he did not want to leave the crew, but Maj. Fitzgerald insisted that he go, a move that saved his life. A month later his crew was downed over enemy lines and never returned.

At headquarters Herschel was the Assistant Wing Inspector responsible for performing technical aircraft inspections and
investigating mechanical failures on combat missions. When needed he flew with other crews .

He had a smile for everyone he met.
He was the kind of fellow who was there when you needed help and was well liked by his friends and co-workers.
He was smart, independent, optimistic, quiet and reserved, not unlike his peers of the Greatest Generation.

He did not talk often about the war, but  when he did he always spoke fondly of Robert Fitzgerald and his crew.
He was always aware how close he came to losing his life with his crew and never forgot them.
Their memory lived on in him and with his family.  He enjoyed attending the 73rd Bomb Wing Reunions
and catching up with old friends and meeting new ones who had shared much of the same history.

After the war he worked for International Harvester in experimental design and then with Caterpillar Tractor Co. in tool design.

He was called back to active duty during the Korean War to Chanute AFB, 3499th Technical Training Group as a Flight Instructor.

He later returned to Dallas, TX to work for Chance Vought, an aerospace company, as an engineer at their manufacturing plant in Grand Prairie.

In the early 60’s he took a job as a mechanical engineer for NASA and worked on the SATURN V rocket booster.
His career in the space industry included working on the Gemini, Apollo, and Space Shuttle programs.  He retired from NASA at the George C. Marshall Space Flight Center, Huntsville, following the first Shuttle mission.

In 1950 he married his wife, Helen,  and they had two children, Herschel Jr. and Linda.  He enjoyed being a dad and participating with his kids in sports, band, and Boy Scouts.   He received the Century Leadership Award from the
Boy Scouts for his volunteer service.   He enjoyed being on the water, boating and fishing.

He passed away in 2003 at the age of 90 and was buried with Military Honors. 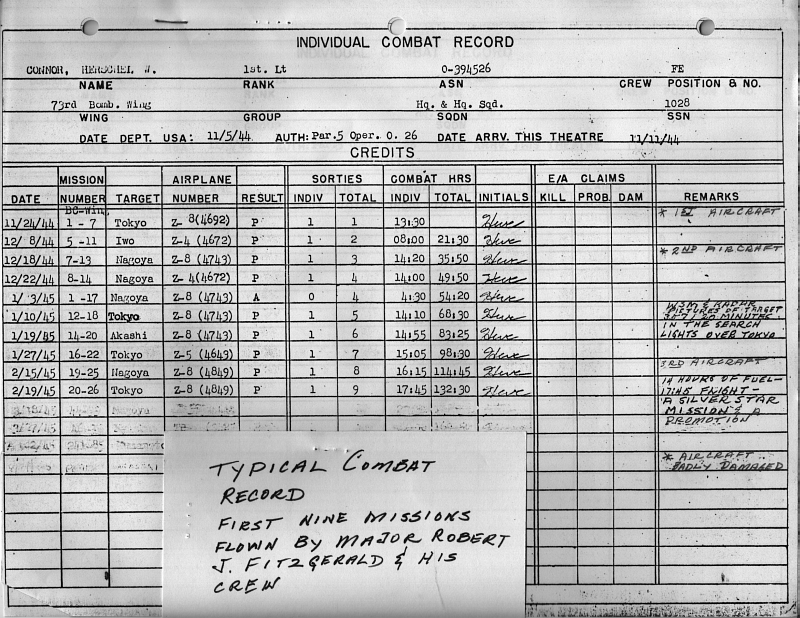 This ICR indicates the accredited missions and combat hours flown by Capt. Connor while w/the crew of Z square 8 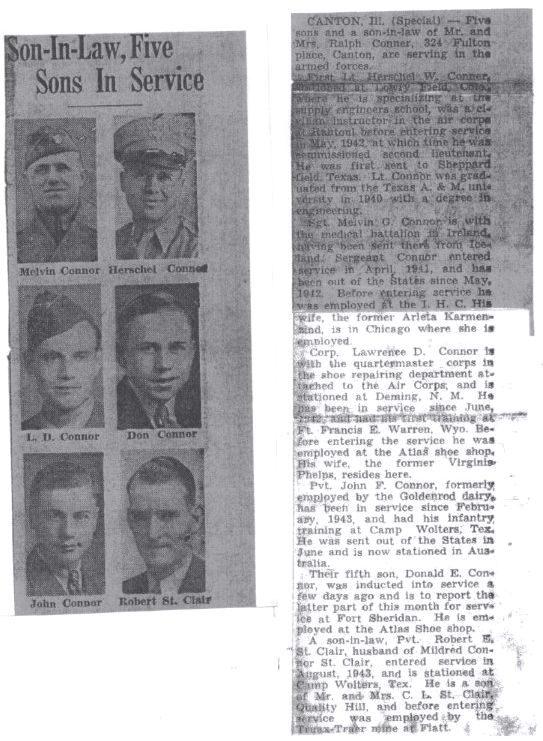 The American spirit shown brightly for the Connor family during WWII as evidenced by this article. John Connor was KIA during the battle for the Phillipine Islands.

This article names those airmen whose B-29's bombed Tokyo, Japan on 24 Nov 1944 for the first time from Saipan since the 1942 Doolittle raid 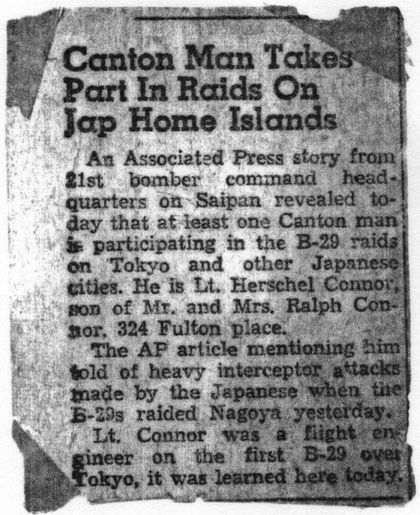 22 Dec 1944 article indicating that Maj.Fitzgerald, Lt.Connor and their crew participated in the bombing of Nagoya 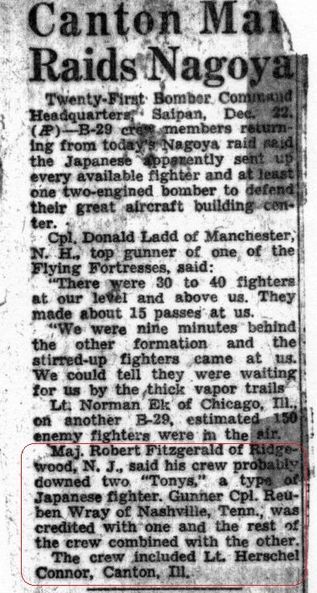 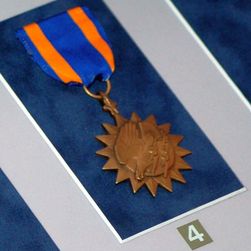 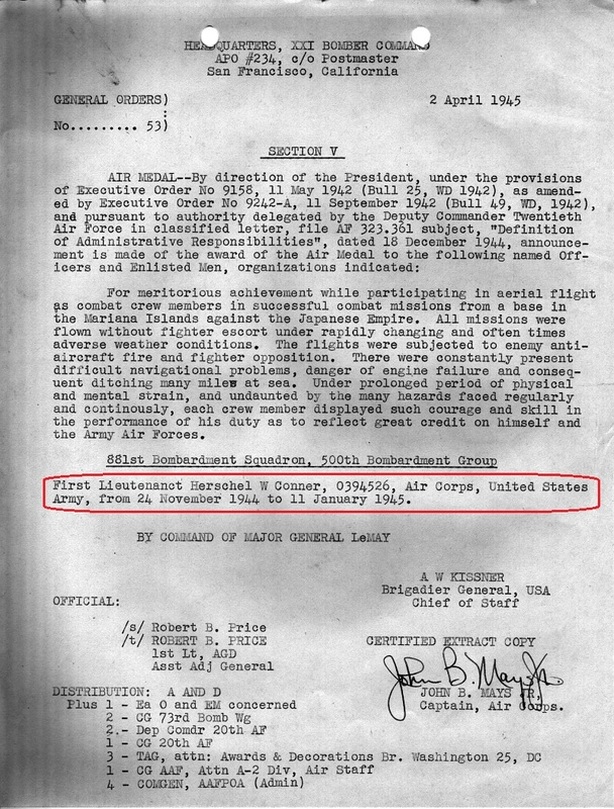 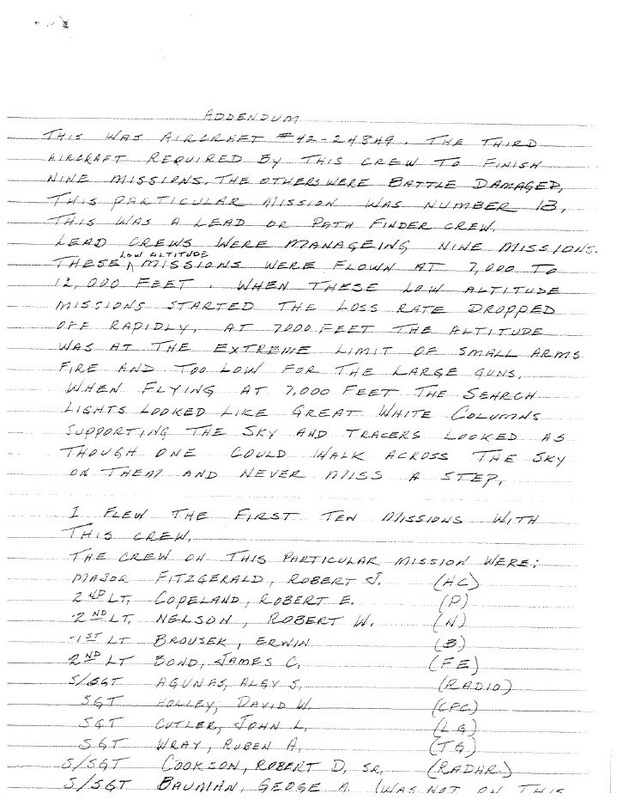 These personal notes of Herschel Connor regarding the Fitzgerald crew, as well a description of low level incendiary raids (above and below) 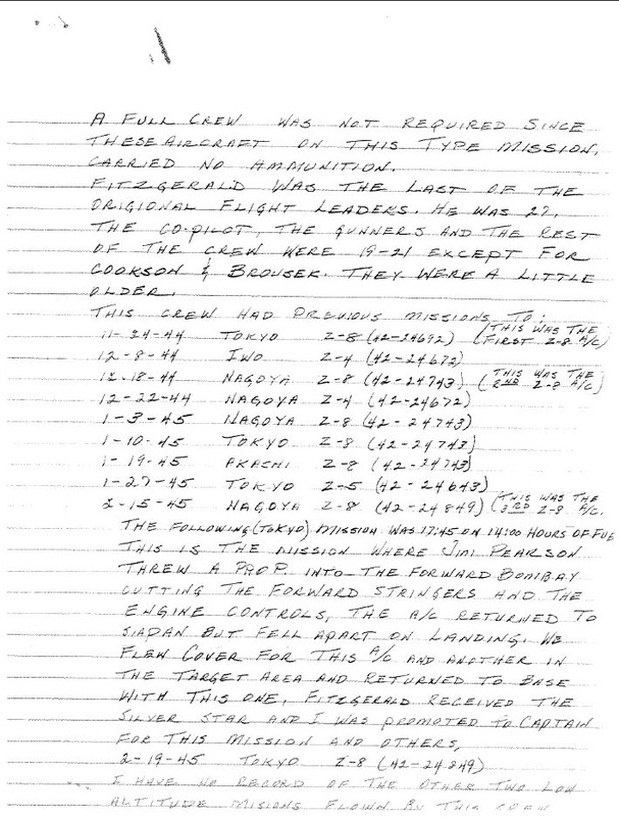 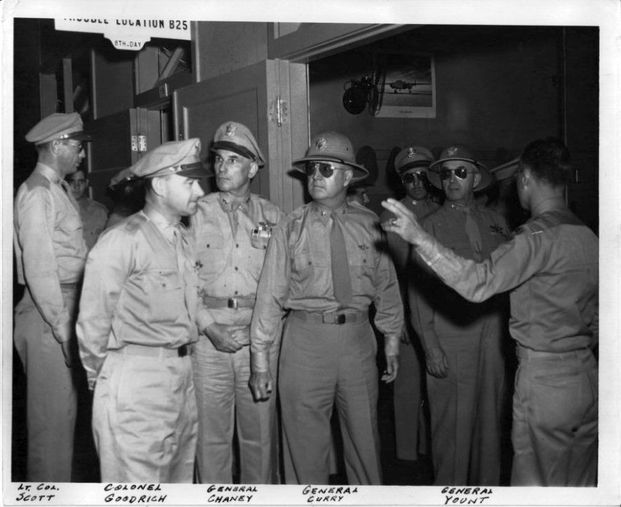 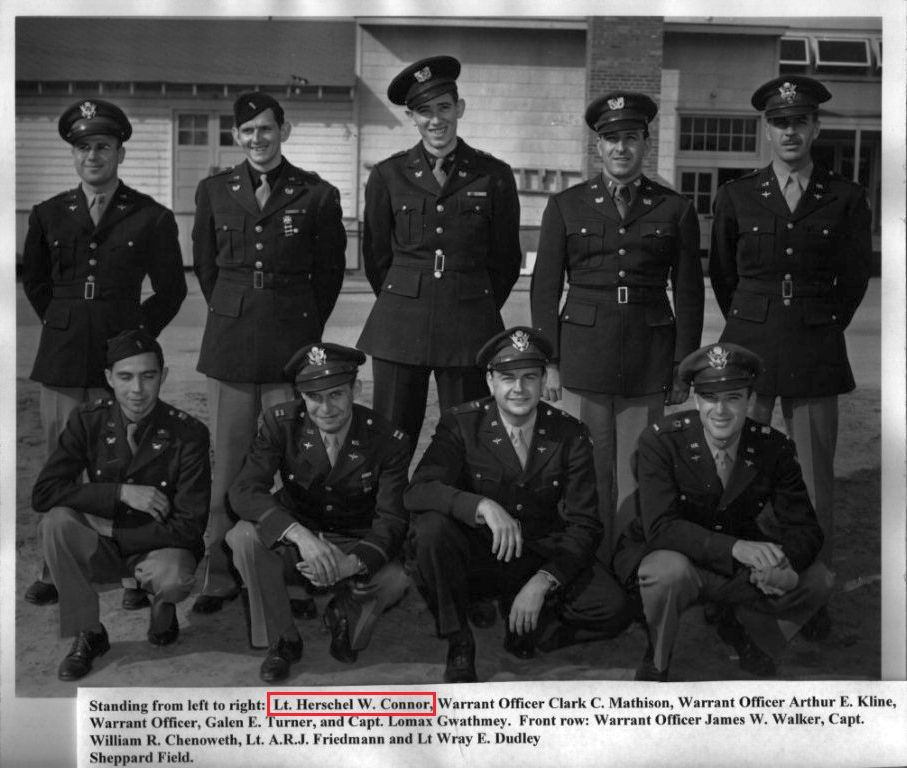 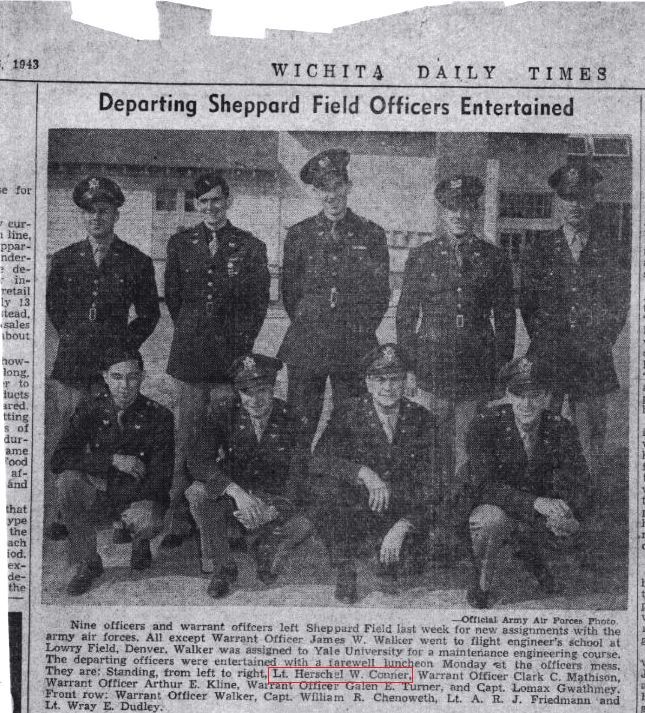 The below three images are of Herchel Connor's address book... 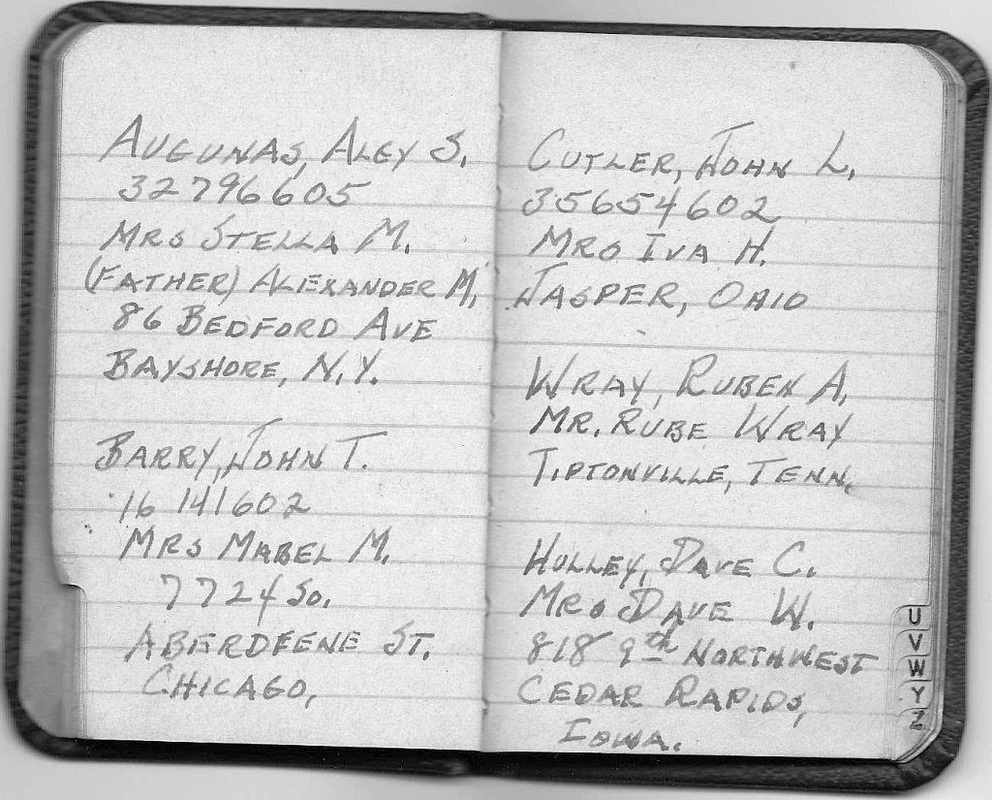 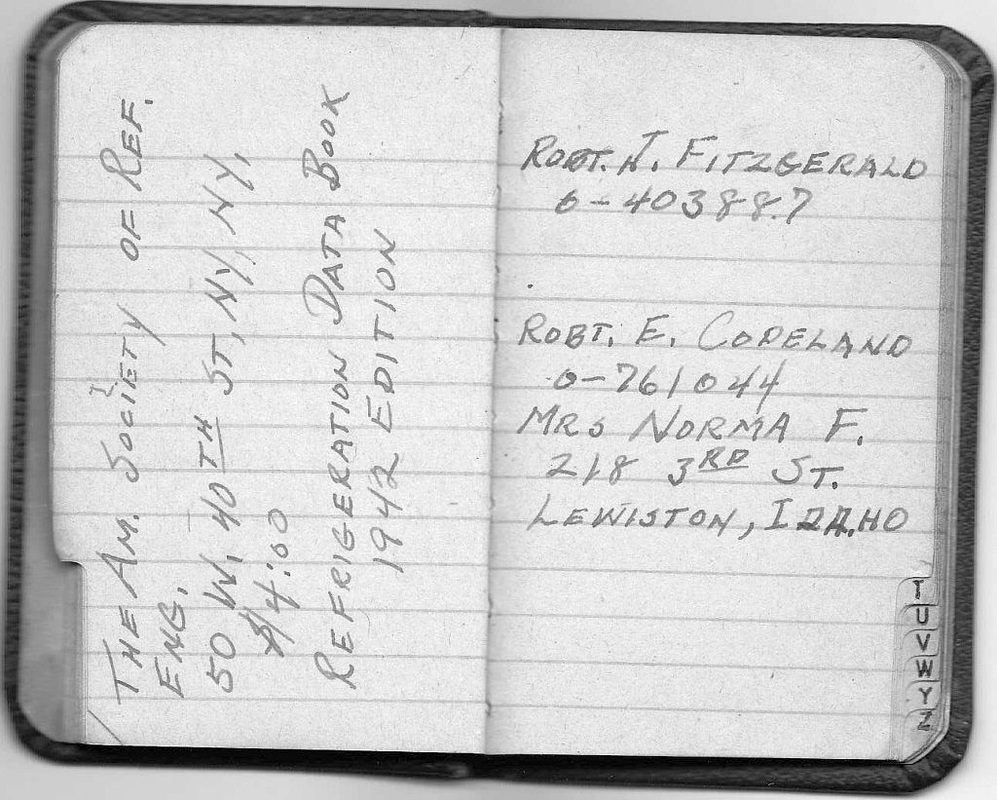 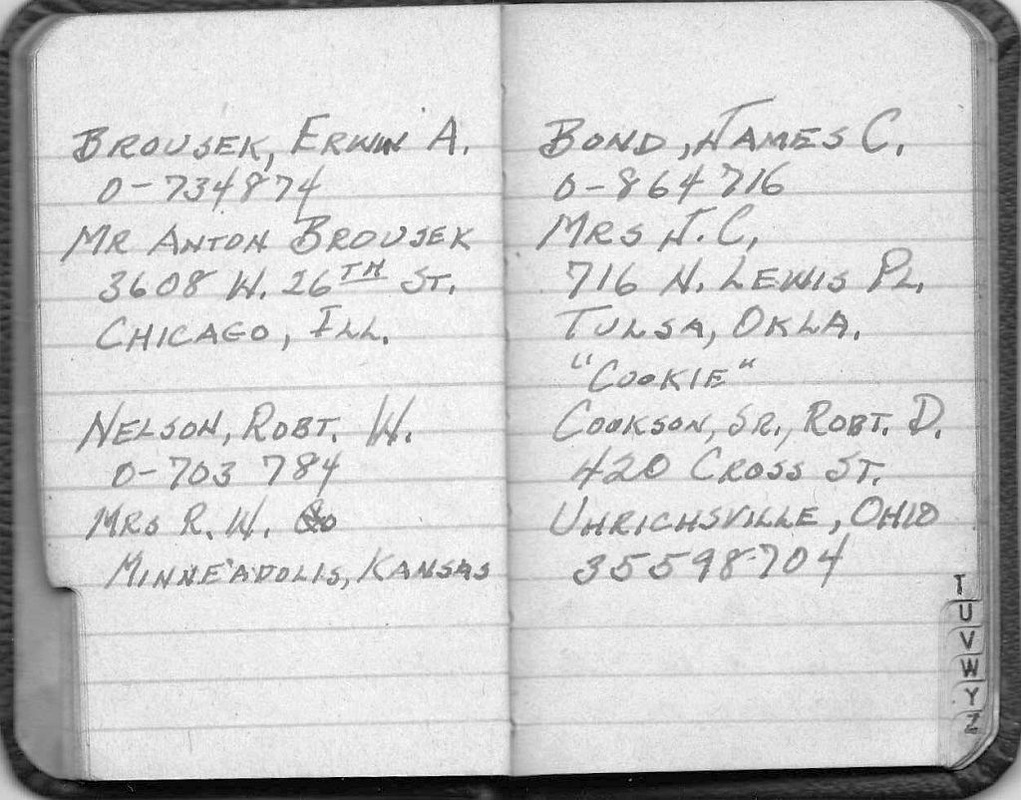 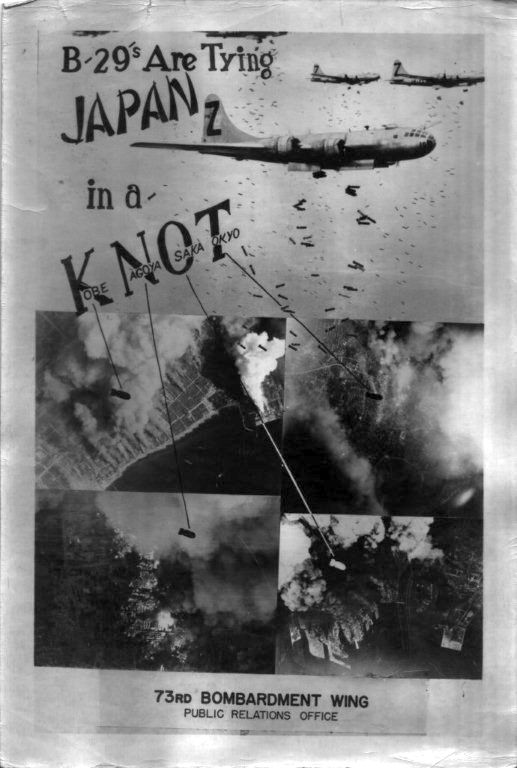 Public relations pamphlet
Our sincere thanks to Linda Connor Sledge and Herschel Connor Jr. for their diligence in providing all of the information on this page about their father.
Their willingness to help has filled in many of the blanks about the fate of Maj. Fitzgerald, our Uncle Bob, and the crew of the Z Square 8, "Mission to Albuequerque"