article by Ernie Pyle on the B29 ride
B-29 SPECIFICATIONS
The B-29 Superfortress prototype first flew on 21 September 1942.
Between then and the end of production in 1946, 3870 of these magnificent airplanes were manufactured.  During WWII it was the most advanced bomber ever built and could fly faster, higher, and farther than any other bomber of
it's era.

Classified as a "Very heavy bomber", the B-29 had a wing span of 141 feet 3 inches and was 99 feet in length.
It had a beautiful, sleek, aluminum body and was extremely distinctive.

Powered by four 2,200-horsepower Wright-Double-Cyclone engines, it had a top speed of 365 mph empty.
Through-out its life-span, these engines would be plagued with problems.  Over-heating, oil leaks, fuel transfer  problems and fires were a problem the flight and ground crews dealt with on a daily basis.  But, they overcame  them and kept the planes in the air.

Fully loaded with eleven crewmen and their equipment, 20,000 pounds of bombs, twelve .50 caliber machine  guns and one 20 mm cannon in the tail plus all their ammunition, as well as almost 41,000 pound of high octane  fuel, the normal cruising speed for a B-29 was 220 mph.

But, the take-off was critical and according to some crewmen, the most hazardous part of their mission.
If your aircraft passed the "point of no return" on the runway during take-off and you lost an engine,  your chances of surviving a crash with that much fuel and bomb tonnage on board, your chances of survival were reduced to practically nothing.

This plane was the first bomber to have pressurized cabins for the crew, including the first of it's kind, remote control gunnery system.  Which kept the ship sealed tight at all times, unless the skin was punctured by flak or shells from an enemy fighter.  The pressurized system was designed to keep the air pressure in the cabin adjusted to an altitude of 8,000 feet, so the crew never had to don oxygen masks unless they did so over the target.  In case the fuselage was punctured by enemy
fire.

The incredible range of the B-29 carrying heavy bomb loads, allowed it to make the bombing of Japan possible from the Mariana Islands, a distance of 3,000 miles round trip and 14-15 hours in duration.  6940 gallons of  fuel weighing 41,640 pounds was almost always totally used up by the time the crews got their ships back home. 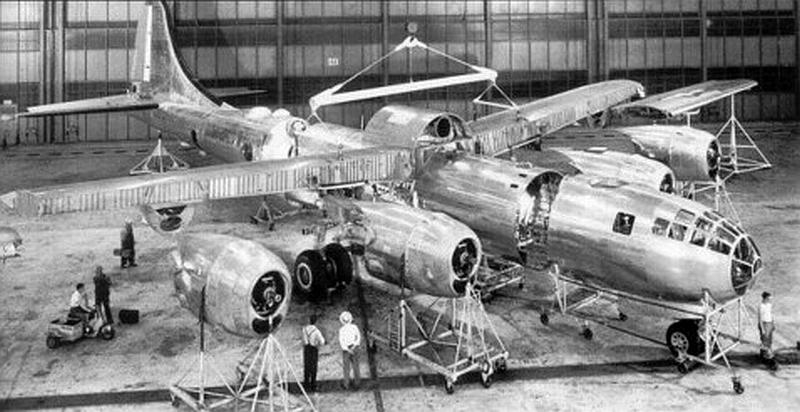 Excellent view of a B-29 just prior to final assembly. The most complicated and advanced aircraft in the world at that time. Flew higher, farther, and faster than any other bomber built in that era.

Links below found by our friend Dick Field Jr.

The internal hatch for entering/exiting the aircraft (external view of nose wheel hatch) .
This is a large square (36 inch to a side minimum) hatch next to the flight engineer's station.   It is a manually
operated hatch, lifting towards the left side of the aircraft and held open by a  cable and hook.  It basically closes by gravity.  Thus if man #2  got his leg caught in the internal hatch he could either kick it free or man #3 could easily lift the hatch. 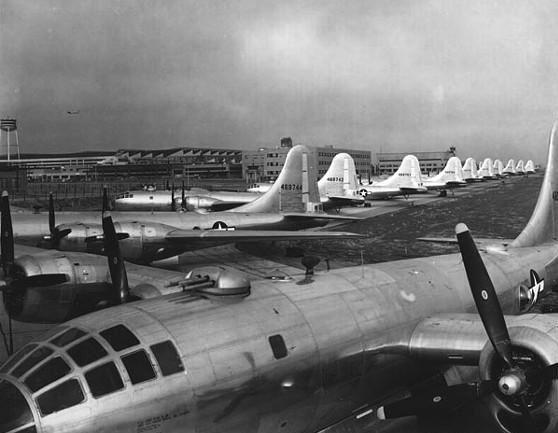 B-29s at Boeing, Witchita Plant, being prepared to go off to war
B-29 Flight Engineer Ed Whaley gives you a detailed look at how complicated his position was, and how precise a FE had to be to get his airplane aloft, and keep it airborne.  He outlines the challenges of learning to operate the systems on the B-29, and the difficulties with this state-of-the-art  aircraft. 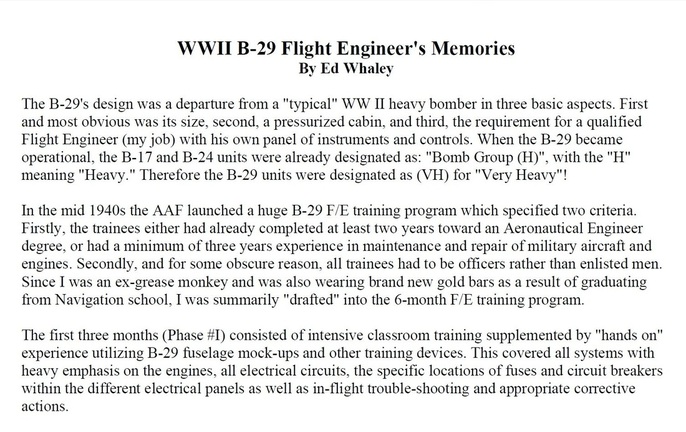 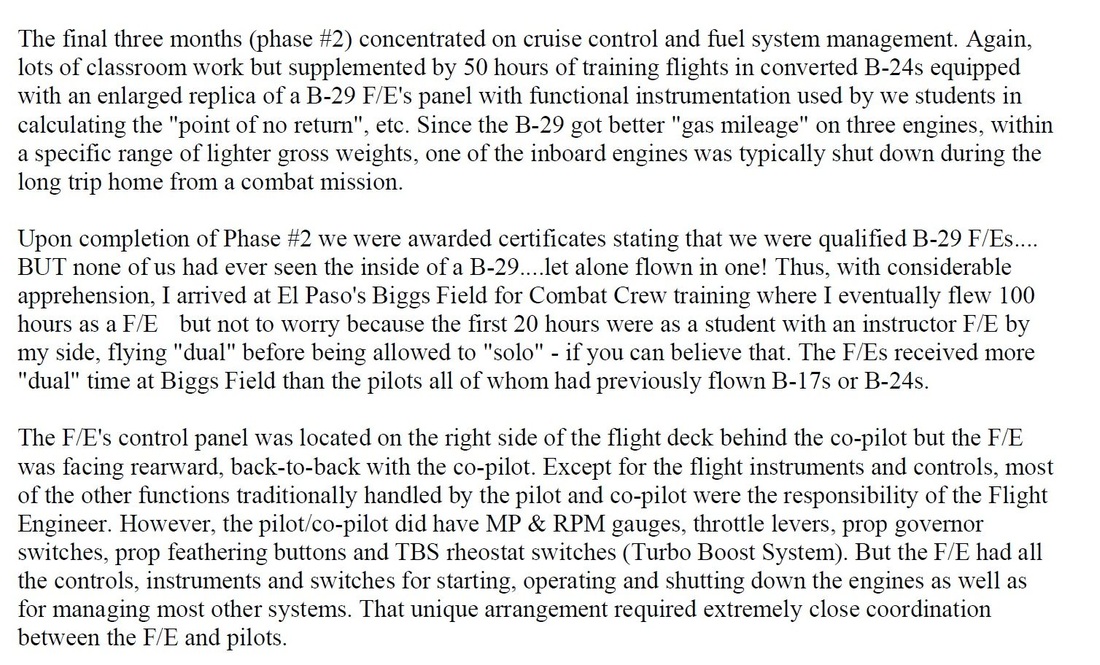 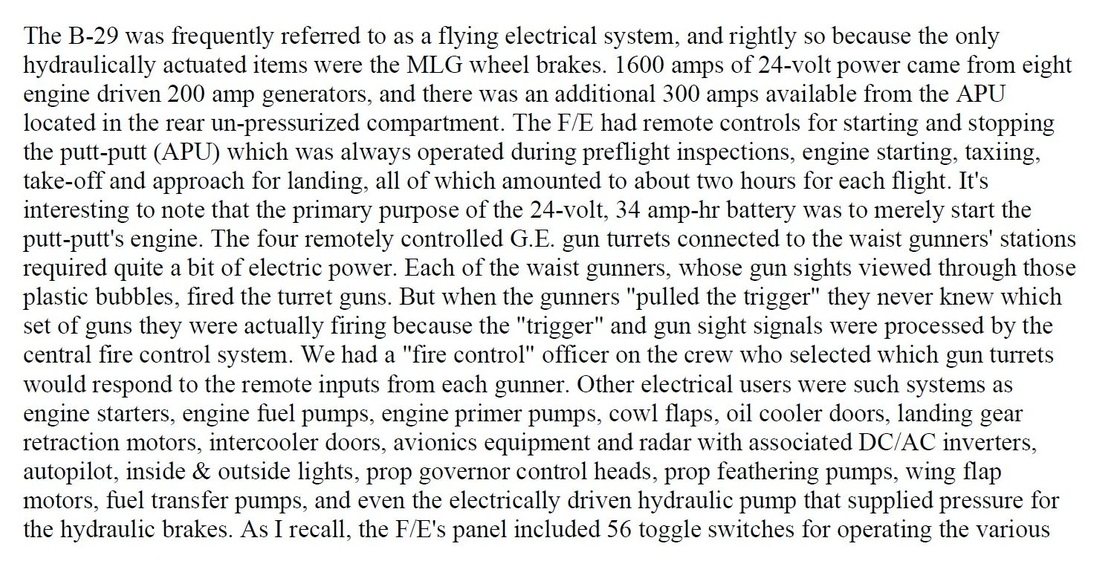 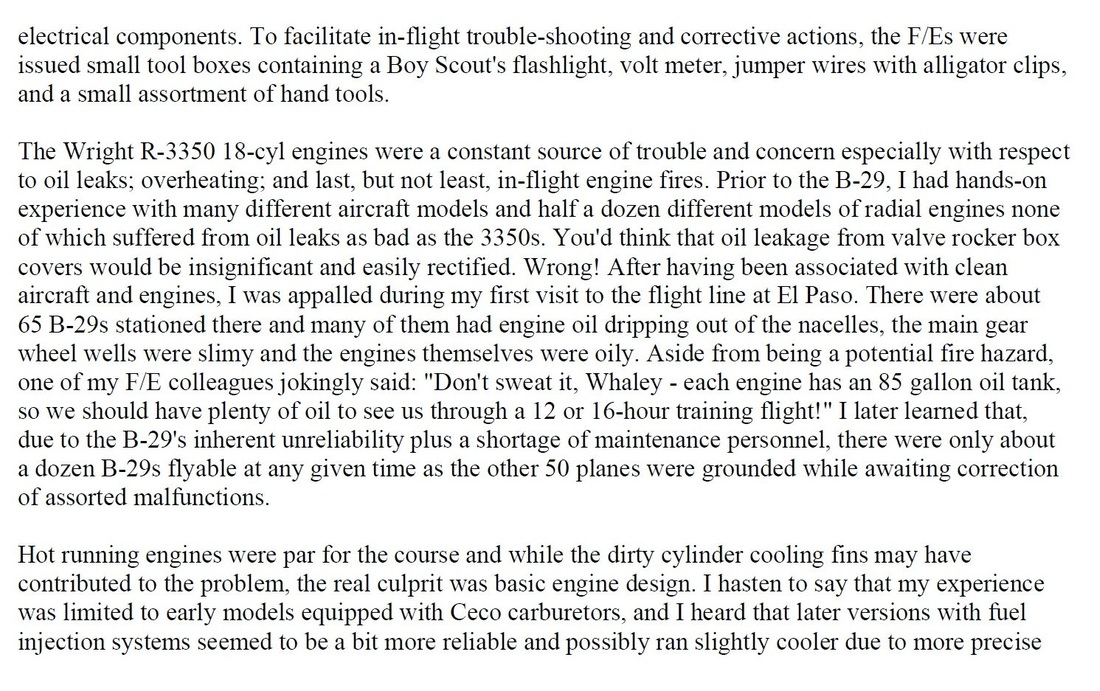 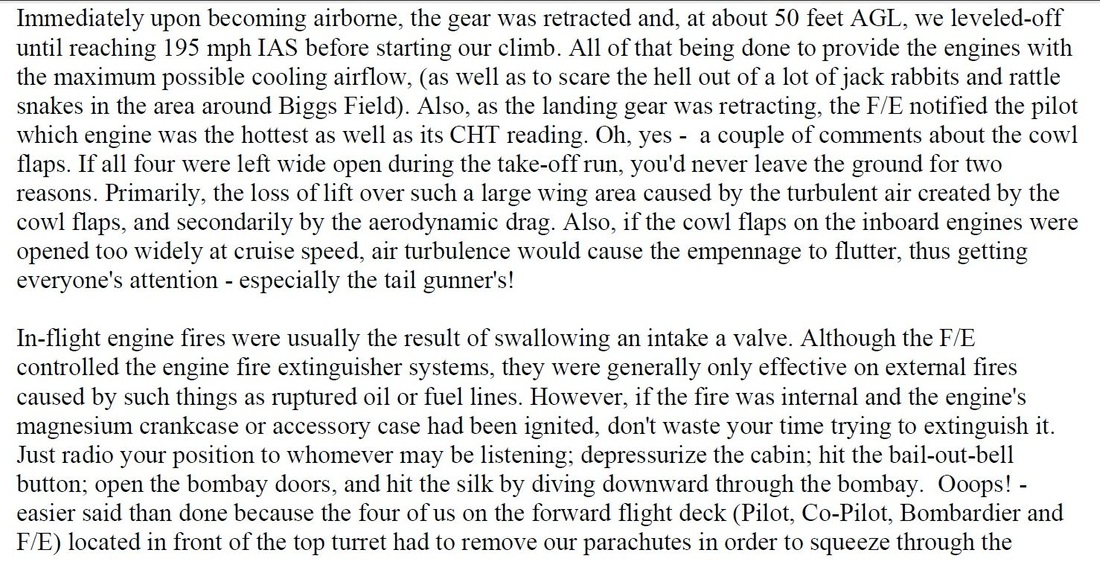 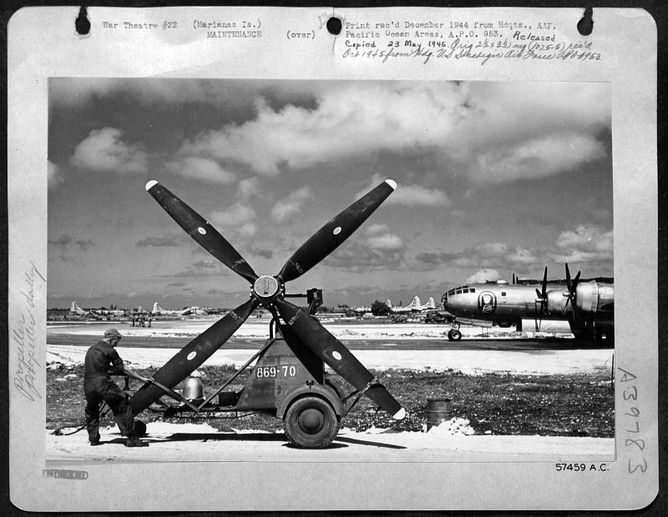 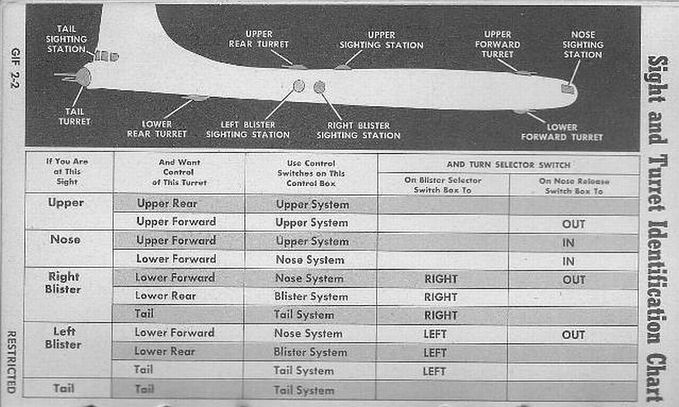 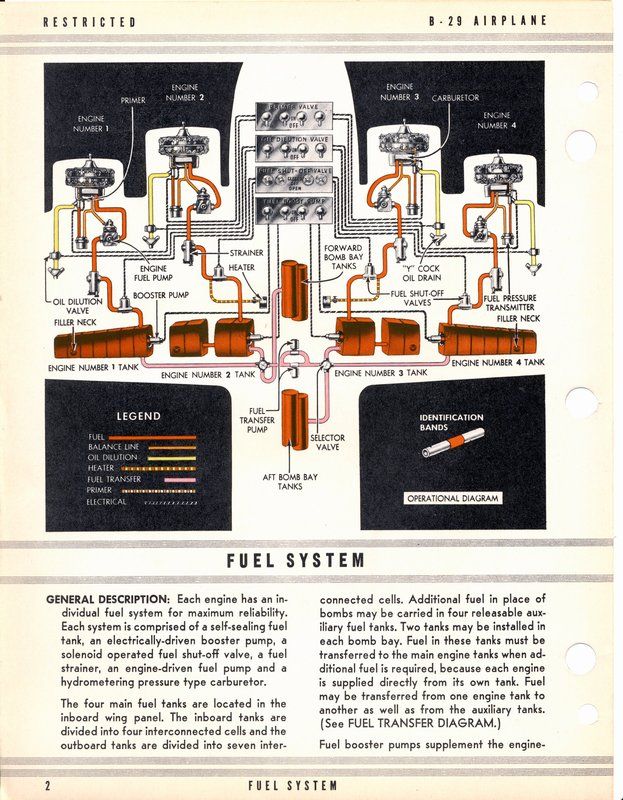 from the B-29 manual (courtesy J. Szalay)
PILOTS ADORE  CRAMPED B-29
Ernie Pyle - In  the Mariana Islands

The B-29 is unquestionably a wonderful airplane. Outside of the famous old Douglas DC-3 workhorse, I've never  heard pilots so unanimous in their praise of an airplane.

I took my first ride in one the other day. No, I didn't go on a mission to Japan. We've been through all that before.
I don't believe in people going on missions unless they have to. And as before, the pilots here all agreed with me; but I went along on a little practice bombing trip of an hour and a half. The pilot was Maj. Gerald Robinson, who lives in our
hut.

I sat on a box between the pilots, both on the takeoff and for the landing, and as much as I've flown, that was still a thrill. These islands are all relatively small, and you're no sooner off the ground than you're out over water, and that feels funny.

If the air is a little rough, it gives you a very odd sensation sitting way up there in the nose. For the B-29 is so big that, instead of bumping or dropping, the nose has a "willowy" motion,  sort of like sitting out on the end of a green limb when it's swaying around.

The B-29 carries a crew of 11. Some of them sit up in the cockpit and the compartment just behind it. Some others sit in a compartment near the tail, the tail gunner sits all alone, way back there in the lonely tail  turret.

The body of the B-29 is so taken up with gas tanks and bomb racks that there's normally no way to get from front to rear compartments. So the manufacturers solved that by building a tunnel into the plane, right along the rooftop.

The tunnel is round, just big enough to crawl in on your hands and knees, and is padded with blue cloth. It's more like
30 feet long, and the crew members crawl back and forth through it all the time. Maj. Russ Cheever reported that he accomplished the impossible the other day by turning around in the tunnel. On missions some of the crew go back in the  tunnel and sleep for an hour or so, but a lot of them can't stand to do that. They say they get claustrophobia.

There used to be some sleeping bunks on the B-29, but they've been taken out, and now there's hardly even room to lie  down on the floor. A fellow does get sleepy on a 14-hour mission. Most of the pilots take naps in their seats. One pilot I know turned the plane over to his co-pilot and went back to the tunnel for "a little nap" and didn't return for six hours,
just before they hit the coast of Japan. They laughingly say he goes to sleep before he gets his wheels up.

The B-29 is a very stable plane and hardly anybody ever gets sick even in rough weather. The boys smoke in the plane, and the mess hall gives them a small lunch of sandwiches, oranges, and cookies to eat on the way. On mission days all flying crewmen, even those not going on the mission, get all the fried eggs they want for breakfast. That's the only day they have eggs.

The crewmen wear their regular  clothes on missions, usually coveralls. They don't like to wear heavy fleece-lined clothes and all that bulky gear, because the cabin is heated. They do slip on their heavy steel "flak vests" as they approach the target.   They don't have to wear oxygen masks except when they're over the target, for the cabin is sealed and "pressurized" - simulating a constant altitude of 8,000 feet.

Once in a great while one of the plexiglass "blisters" where the gunners sit will blow out from the strong pressure inside, and then everybody better grab his oxygen mask in a hurry. The crew always wear the oxygen mask over the target, for a shell through the plane "depressurizes" the cabin instantly, and they'd pass out.

The boys speak frequently of the unbelievably high winds they hit at high altitudes over Japan. It's nothing unusual to have a 150-mile an hour wind, and my nephew, Jack Bales, said that one day his plane hit a wind of 250 miles an hour.

Another thing that puzzles and amuses the boys is that often they'll pick up news on their radios, when still only halfway home, that their bombing mission has been announced in Washington.  Thus all the world knows about it, but they've still got a thousand miles of ocean to cross  before it's finished. Science, she is wonderful.