This page is under construction... 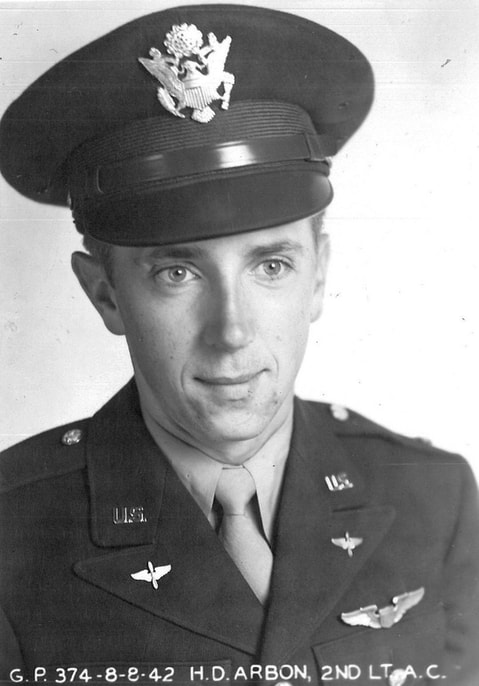 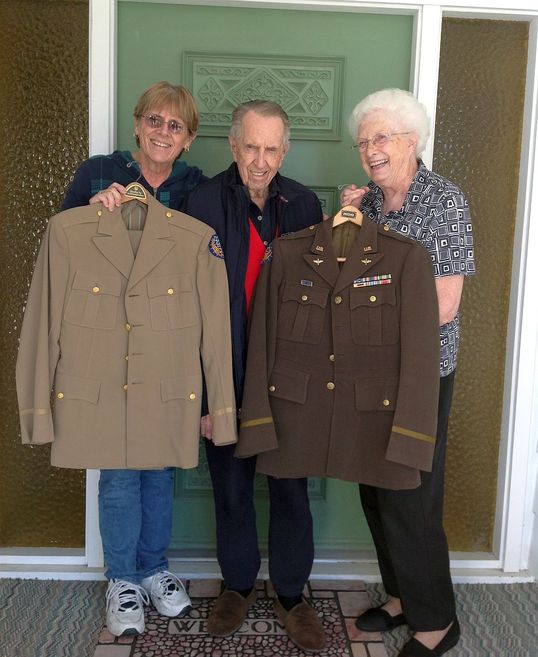 Harold with his daughter Denise and wife Lael displaying his WWII uniforms. 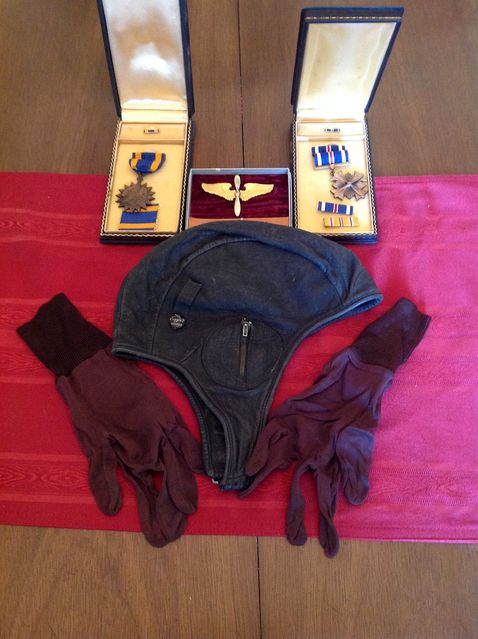 Harold kept his silk gloves and leather cap from his days as a flight cadet in 1942. 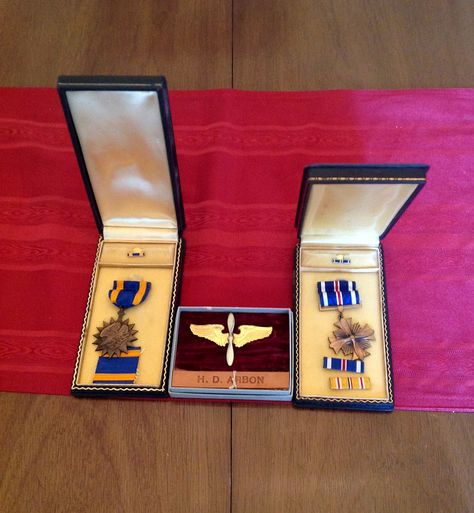 Capt. Arbon medals
It was a pleasure and an honor to meet Harold Arbon, his wife Lael and daughter Denise, and I am proud to say that Harold lived his life modestly, humbly and very successfully.  Like other WWII veterans I have had the pleasure to meet, Harold epitomized the folks we call "The Greatest Generation."

Born in 1919 on a ranch in Idaho, Harold had many chores, attended a one room school house, and loved taking sleigh rides in the winter.  One of his very first jobs was starting the fire in the pot-bellied stove to warm the school before the other students arrived.  For this he was paid .50 cents per month which he saved and bought a bridle for his Shetland pony, Sparky.

His father was not only a rancher who raised crops and livestock, he was also a Deacon in their church.  So Harold learned at an early age not only the importance of educational and physical growth, but that of Spiritual belief.  He put all three to good use in his life.

Life on the ranch was fairly routine.  Work, work, work, plus school six days a week, and church on Sunday.  But young Harold thrived and pursued the past times of fishing and hunting.

Harold attended high school in American Falls and Pocatello, Idaho.  He then proceeded to study chemical engineering at what is now Idaho State College.  Moving on to Salt Lake City he discovered a new passion....flying!

He enrolled in the Civilian Pilot Training Program at the University of Utah.  Harold successfully passed the primary flight course, and then the secondary flight program where he flew the Waco Biplane.

Harold was at his parents home on December 7, 1941, when he heard the Japanese had attacked Pearl Harbor.  Just six days before he was to report for induction into the U.S. Army Air Corp. at Salt Lake City on December 13th.

But on December 11, 1941, another event occurred that would influence Harold for the rest of his life.  He received a Patriarchal Blessing from the church which pronounced that the Lord would be with Harold with his guardian angels to protect him, and that Harold would not be harmed.  Harold believed this "to be true through out his military career and other instances of his life."

His "hectic" army life began at flight school in Ontario, California, where he learned to fly "military style" in a Stearman PT-19 biplane.

Harold passed all flight requirements and military protocol and was assigned to Luke Field in Phoenix, Arizona for advanced flight school training in the single engine category.

On June 23, 1942, Harold graduated from flight school, earned his silver wings and was promoted to 2nd Lt. in the Army Air Corp.  He was also overjoyed to now be earning $250.00 per month.

Now earning what he considered a sufficient income, on June 30, 1942, married his long time sweetheart, Ardith Gilbert in Pocatello and returned to Luke Field.

He remained at Luke Field and was assigned to a tactical fighter group flying P-40s.  His group was informed that they would soon be shipped to Africa.  But those transfer orders never came and after two months, Harold was assigned as a flight instructor at Luke in the AT-6 aircraft, which he did for one year.

Frustrated at being a 2nd Lt. flight instructor, Harold requested a transfer, and was soon on his way to Hobbs, New Mexico, where he successfully learned to fly the B-17 bomber.  Unfortunately, with his prior flight instructor background, Harold was again assigned as a flying instructor, this time on the B-17s.  But this did have some advantages.   As an instructor Harold had access to the bombers on weekends, and he could fly to anywhere he chose in the U.S. as long as he was back by Monday mornings.  He did this routinely.

He then took a bizarre journey via Smyrna Airfield to a B-17 group at Sebring, Florida, where for three months he had no assigned duties.  But he did make sure he flew at least four hours per month to retain his flight pay.

Finally, orders came and he reported to Clovis Air Field where he joined a new group being formed to fly the most modern bomber at that time, the B-29.

Harold trained at Clovis until April of 1944 when he and his group were transferred to Walker Field, Kansas.  There, additional personnel were brought in from various training schools and the eleven man crews were assembled.

Initially, no B-29s were available and the crews trained on B-17s.  But B-29s did begin to arrive, and Harold said the first one he saw was so big he " didn't think it could fly."  He also didn't notice the recessed landing lights on the superfortress and said "I guess it is too large to fly at night."  Of course, he soon learned otherwise.

At Walker Field, Harold was promoted to 1st Lt. And became an Aircraft Commander.  Over the next few months he and his men got to know each other, and learned to function as a highly skilled crew on their aircraft.

In the fall of 1944, Harold and his crew were transferred to Lincoln, Nebraska, where they had nothing to do but wait, wait, wait. In December they were sent to Kearney, Nebraska where they were assigned a new B-29, and learned they were heading to Saipan in the Pacific Theatre, via Albuquerque, Mather Field-Sacramento, Hawaii, Johnson Island, and Kwajalein.

Upon completion of his accredited 35 bombing missions, Harold returned home in July 1945 and spent an uneventful year at Muroc  Field before being Honorably Discharged on May 4, 1946.

On August 3, 1946, Harold Davis Arbon, Jr. was born to the happy parents in Pocatello, Idaho.

Harold returned to school and obtained a Bachelor of Science Degree in Pharmacy in June of 1948 from Idaho State College.  He and his family settled in Salt Lake City, but this was just the beginning of their journey.

Brent Michael Arbon was born on August 5, 1949 to Harold and Ardyth while they resided in Salt Lake City.

Unfortunately, Harold and Ardyth had grown apart during these years and decided to separate, with Ardith raising their two sons.  Harold would meet Lael Nelson after the divorce and married her on July 10, 1954.  Harold and Lael celebrated their 63rd wedding anniversary this year.

In 1954, Harold was accepted to Dental School in Kansas City.  While attending dental school full time, he also continued to work as a pharmacist to support his family with a lot of help from his second wife, Lael. Their hard work paid off handsomely when Harold graduated from the University of Missouri Dental School in June of 1958.  And by this time, Harold was being teased about being a "professional student" but it didn't bother him.  From just a young boy, he always loved school.

Having passed the State Dental Board Examinations of both Utah and California, Harold and his wife Lael and daughters Diane and Denise had to decide where they wanted to live and they chose to settle in California.

The Arbon family never regretted this choice and enjoy California. No snow or freezing weather where they live.  They enjoyed the warm weather the year round, the ocean and beaches which were close by, and the variety of activities for their daughters.

Through out his life Harold continued his love of flying and owned his own private aircraft, owned and operated his dental practices, and was part owner in several motels.  He and his family also traveled extensively through out the U.S. and the world.

But perhaps most important to Harold and his family were their deep religious beliefs, and following the principles of the church.  Harold felt protected by these beliefs and never wavered in his spiritual blessing.

As humble as all of the WWII veterans I have known, Harold was strongly supported by his family and was an exemplary man who led an exemplary life. 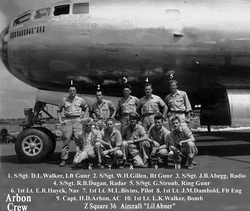 Correction to the aircrew names of above image made by Capt. Arbon himself: 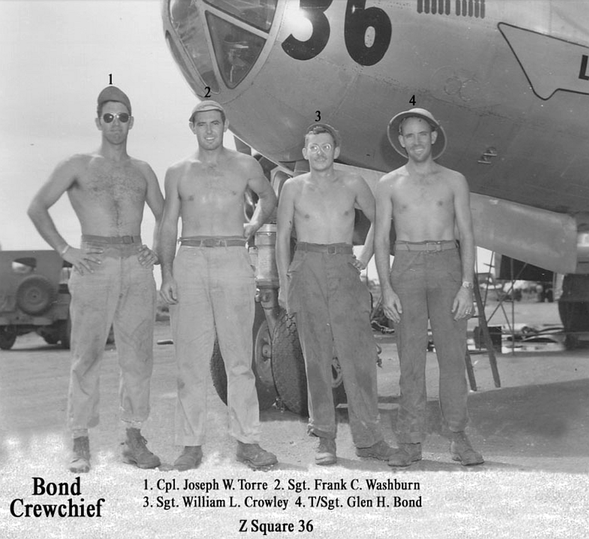 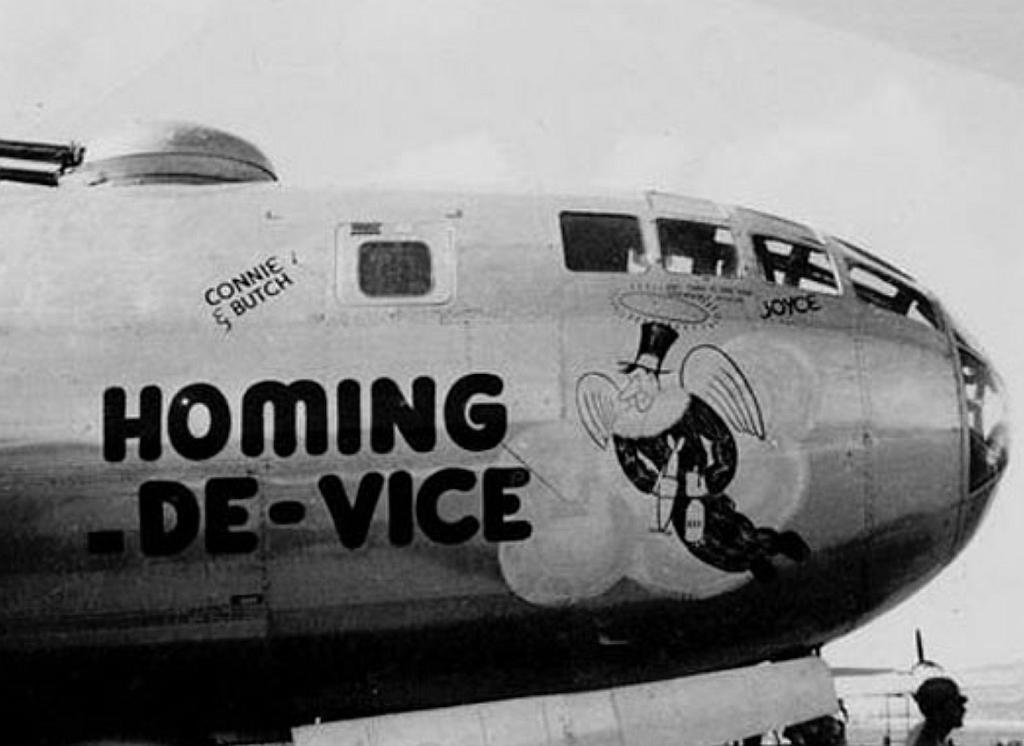 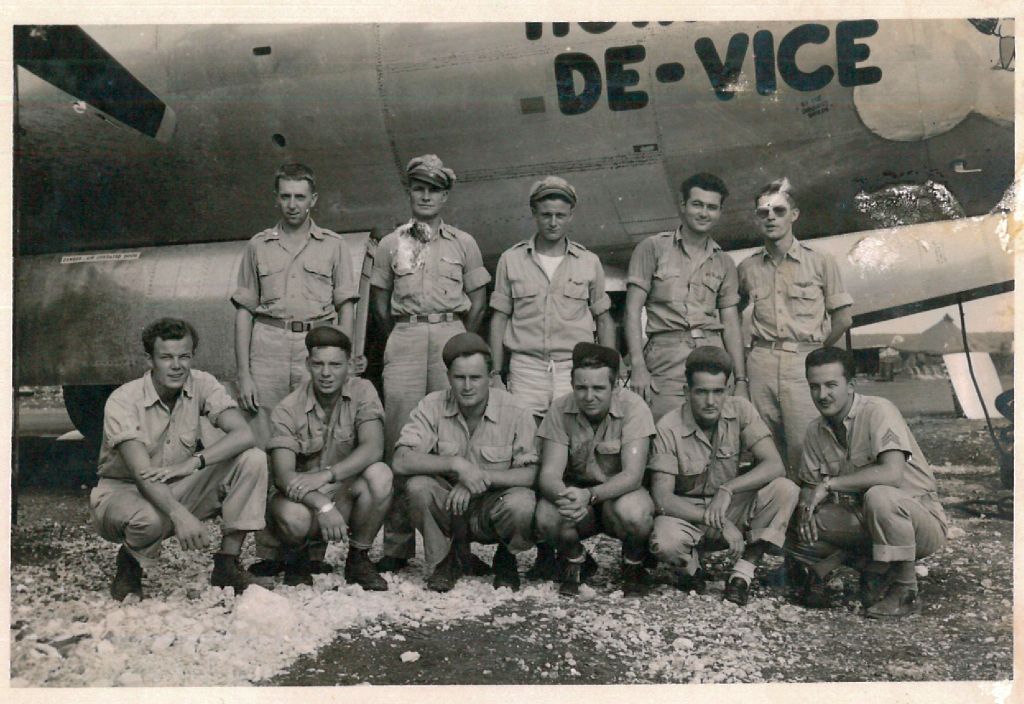 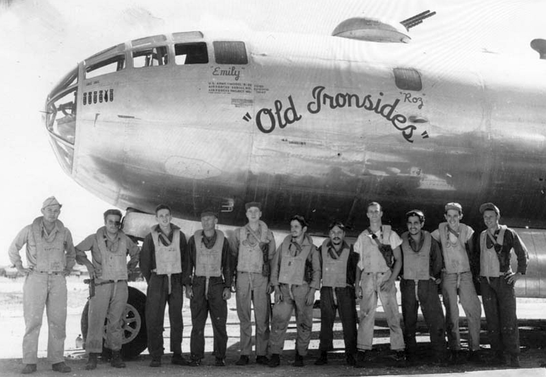 The Arbon crew flew several missions on this aircraft, the Z Square 28, "Old Ironsides." (****This is actually the Gerwick crew standing in front of the aircraft in this photograph.) 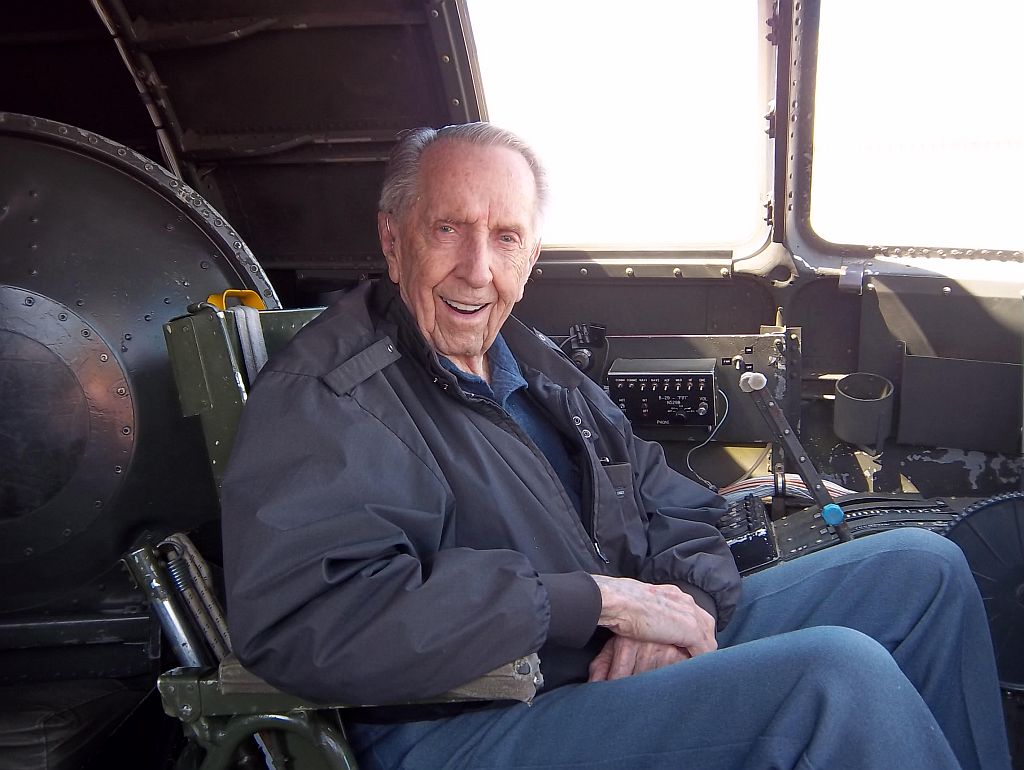 Capt. Arbon back in the Aircraft Commander's seat aboard "Fifi" in Salinas, California. He looks ready to take her up! 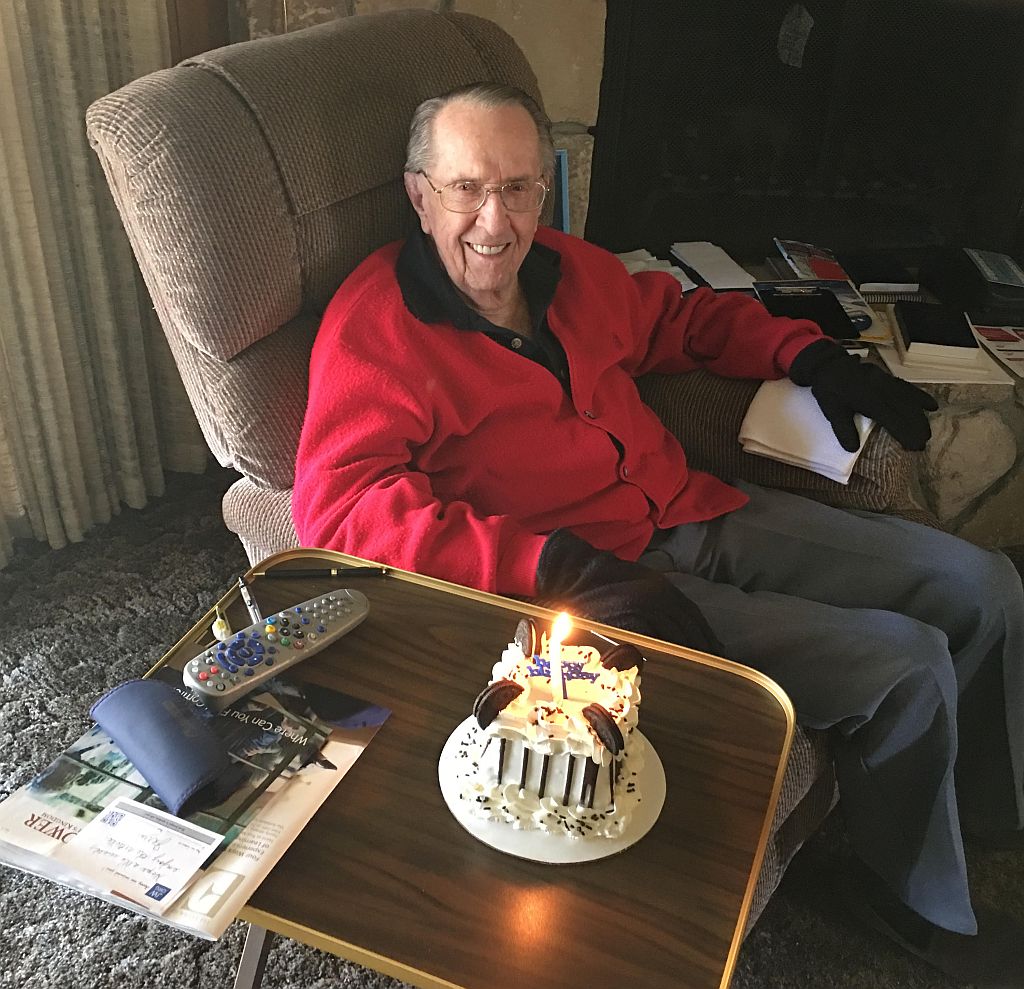 Capt. Arbon celebrating his birthday at home on October 5, 2016. Many Happy Returns Captain! 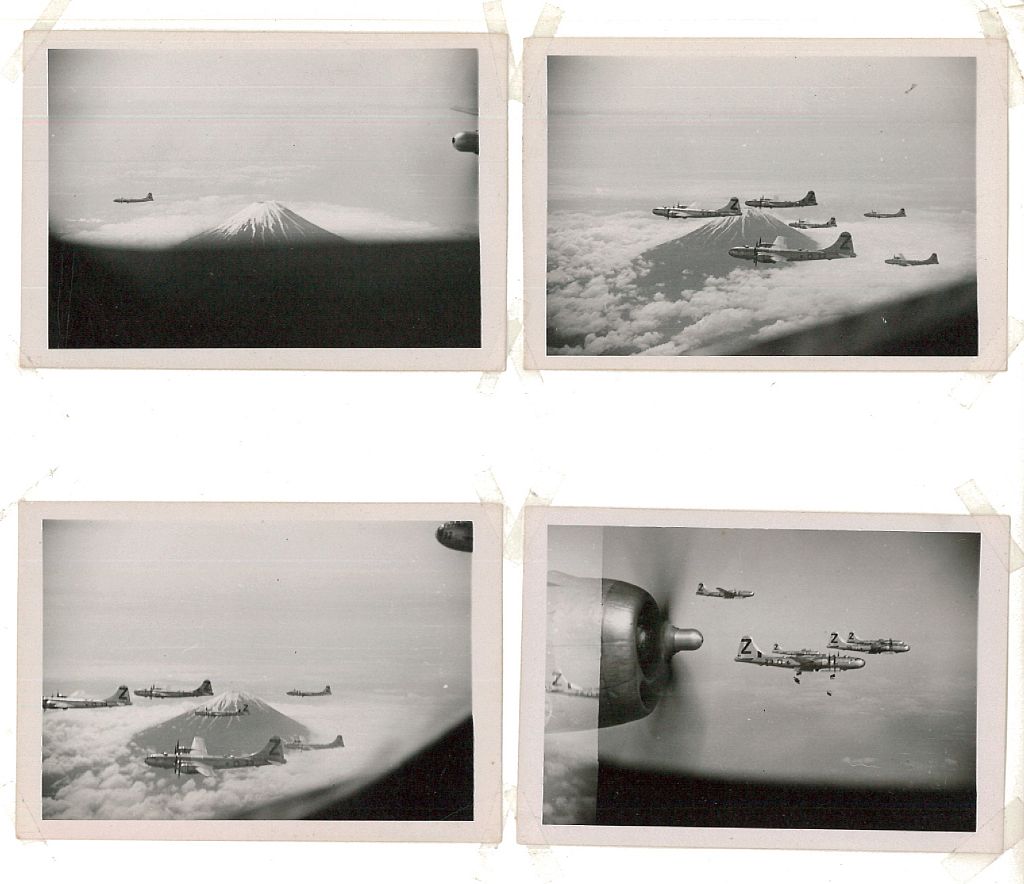 Harold took these four photos from his A/C seat during a bombing mission to Japan. 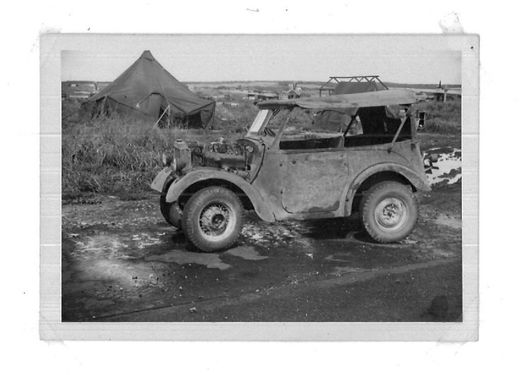 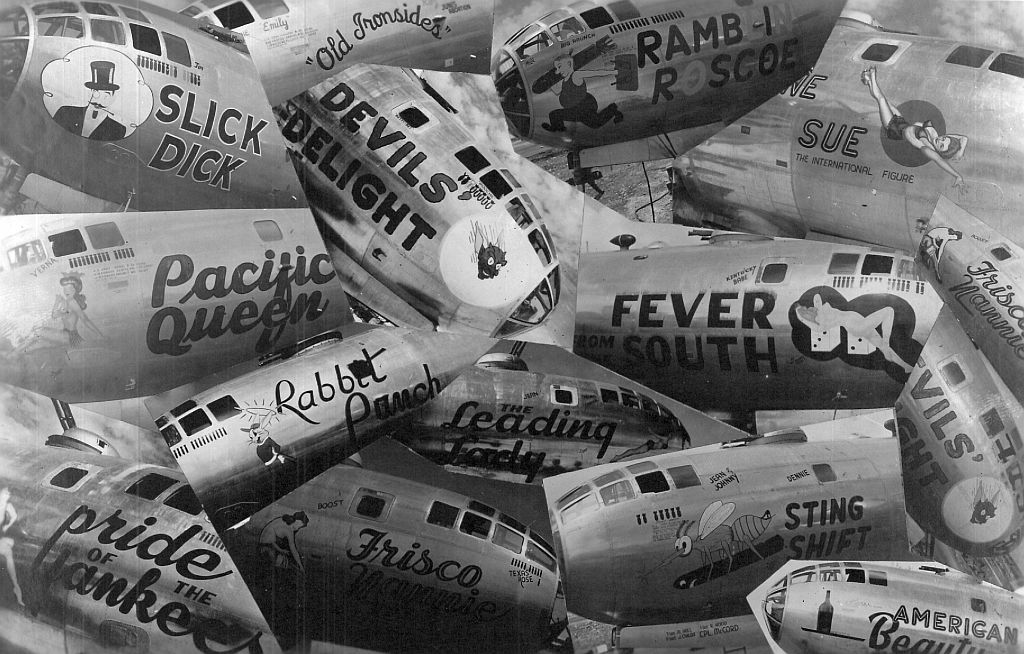 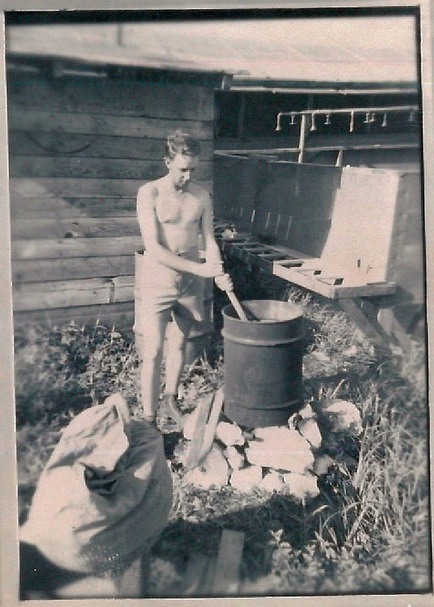 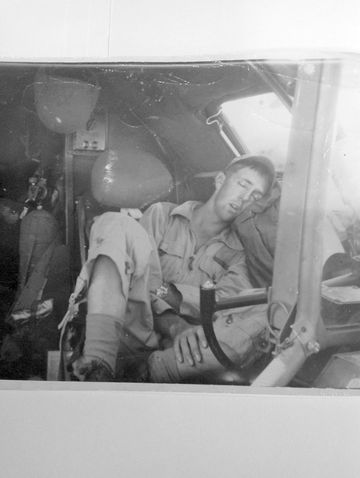 Harold asleep about 7:00am after a bombing mission to Tokyo in April or May 1945. Taken by his bombadier Lt. Walker.
SYNOPSIS OF THE DAY TO DAY LIFE/MISSIONS OF THE ARBON CREW.

24 Oct 44-Arbon crew and 14 other unassigned crews departed Walker Field in Kansas by troop train for Lincoln, Nebraska.  They would wait here to be assigned a new B-29 they would fly to Saipan, or they would be flown to Saipan via the Air Transport Command.  They had no duties to perform while in Lincoln.

1 Dec 44-It appears on this date the Arbon and 14 other crews received orders and were shipped to Kearney Field, Nebraska for deployment to Saipan.

20 Dec 44-Flew from Hawaii to Johnston Island (for fuel) then on To Kwajalein Island.

14 Jan 45-NAGOYA.  Arbon crew in Z-25, "Homing De-Vice."  Critical decisions!  First, the bomb bay doors failed to open, then they had a Bomb rack malfunction and only one bomb dropped over target.  The frantic Bombardier finally jettisoned the hung up bombs, but the Flight engineer mistakenly dumped 800 gallons of fuel.  Lt. Arbon had the crew jettison everything from the plane to lighten it...flak vests, food warmers, cameras, all ammunition, radar and navigational equipment, tool kits, oxygen bottles...everything!  By the time they arrived back at Isley Field on Saipan all four engines were sputtering from lack of fuel.

9 Mar 45-TOKYO.  Arbon crew in Z-31, "Homing De-Vise."  (1st low level incendiary raid on Japan.)  Aborted mission due to runaway prop on #1 engine that could not be feathered. 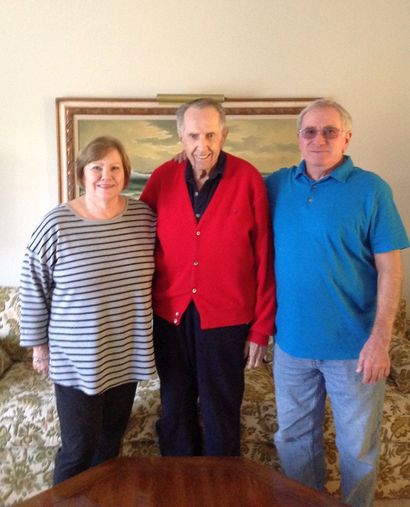 My wife Janice, Harold Arbon and I enjoying our day.