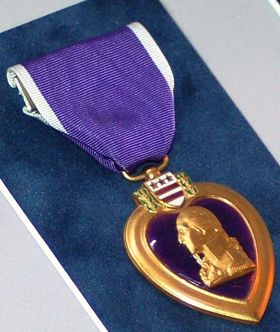 The Purple Heart Medal is awarded to any member of the United States armed forces, who has been wounded or killed in action against an enemy of the United States. All eleven members of the Z Square 8 crew were awarded this medal.
"B-N-Jyu-Ku"......translated from Japanese to English means "the B-29s are our enemy."
From Kobe Historical Notes, 1945, it especially applied.  Kobe was bombed by 331 B-29s on 17 March 1945, killing over 8000 residents and burning the city to black ashes.  Three B-29s were downed during the bombing. 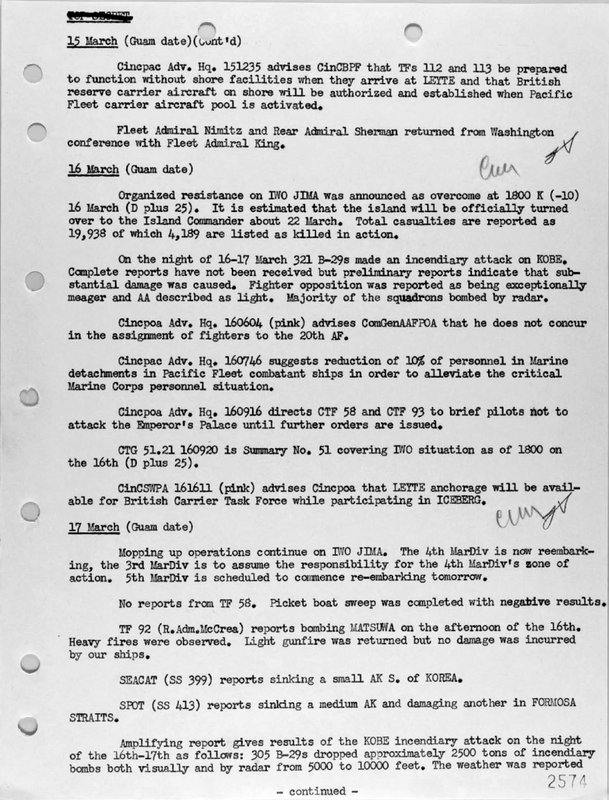 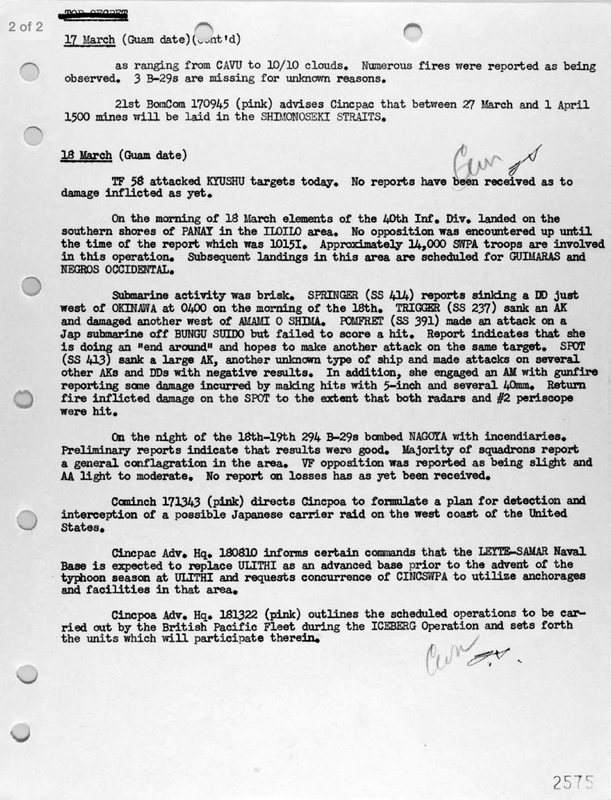 Here is what we know of what happened next to the crew:
According to American internees in the Hobe Hyogo Ken POW camp #14, and W.O. Kuniyoshi Hasegawa, a ground crewman at a Japanese base, they saw a stream of light like a shooting star strike a B-29 that was illuminated by two search lights, and a moment later a fireball, when the "Tony" fighter plane of Capt. Junichi Ogata impacted Uncle Bob's plane.  Reports state that there were over 300 enemy fighter attacks against the B-29s on this raid.
No reports state, and it is not believed, that Capt. Ogata purposely rammed our uncle's plane.  Capt. Ogata was an excellent pilot, having downed eight American bombers in Burma, four more over Japan, and damaged five in his home defense air combat.
Capt. Ogata's fighter struck our uncle's plane on the right side just ahead of SSgt Holley's gun position and directly behind the right wing, severing the B-29 into two pieces. It appears the wings also separated from the fuselage.  The tail section of the plane fell to the ground relatively in tact with the bodies of Barry, Cookson, Cutler, Holley, and Wray huddled together when found about one-half mile East of the POW camp.  All were deceased.  We do not know whether they were killed instantly by the impact with the Ogata aircraft, or when the tail section crashed to the ground.
Fitzgerald, Copeland, Bond, and Brousek, were believed to be ejected by the force of the impact and explosion with the Ogata aircraft from the front pressurized compartment of the B-29, and were found separately on the ground.  All were deceased.
Navigator Lt. Nelson and Radio Operator SSgt Augunas, who sat across from each other in the rear of the forward pressurized compartment, were somehow thrown clear of their aircraft after the impact, and parachuted to the ground.  They were quickly captured and imprisoned until 18 July 1945.  On that date, in a two hour farce the Japanese called a "trial" they were convicted of "war crimes" and murdered by the Japanese.  The Japanese claimed that Nelson and Augunas were not POWs, but war criminals, because according to the Japanese representatives they had carried out indiscriminate bombings against Japanese civilians.

That is what we know of Uncle Bob and his crew mates on "Mission to Albuquerque".
We will not try to speculate on what may have been.  Or why this happened.  We can only continue to honor them for a job well done.  They deserve more...

Exact images of the aircraft, including tail insignias, that Capt. Junichi Ogata was flying the night his fighter plane inadvertently crashed into the Z Square 8 over Kobe, Japan

The above color photograph is an exact reproduction of the the aircraft Capt. Ogata was flying the night he "rammed" our Uncle Bob's B-29, the Z Square 8. It is an KI-61-I-Tei "Tony" fighter.
The following mission report of 17 March 1945 was filled out by the Aircraft Commander of the A Square 48, of the 871st Squadron, 497th Bomb Group, 73rd Bomb Wing from Saipan.  It describes what the A/C believed to be a B-29 exploding over Kobe, Japan occuring at approximately 0455am.
The A Square 48 was at the IP at Wakayama on its bomb run when it reported witnessing the explosion of another B-29 just below the clouds.  From Wakayama it is approximately 30 air miles to Kobe City over Osake Bay.

This may or may not be a description of our Uncle Bob's aircraft piloted by Major Robert Fitzgerald, but it is certainly a strong possibility.  Major Fitzgerald was to bomb from 6600 feet at an approximate time from take off in Saipan of
between 0407am-0515am.  And Major Fitzgerald of the Z Square 8 did explode over the target after being rammed by a Japanese fighter.

But, two B-29s of the 313th from Tinian were also lost that night, and one of those could have been what the crew of the
A Square 48 sighted.  We will continue to research this document to come to a more conclusive decision. 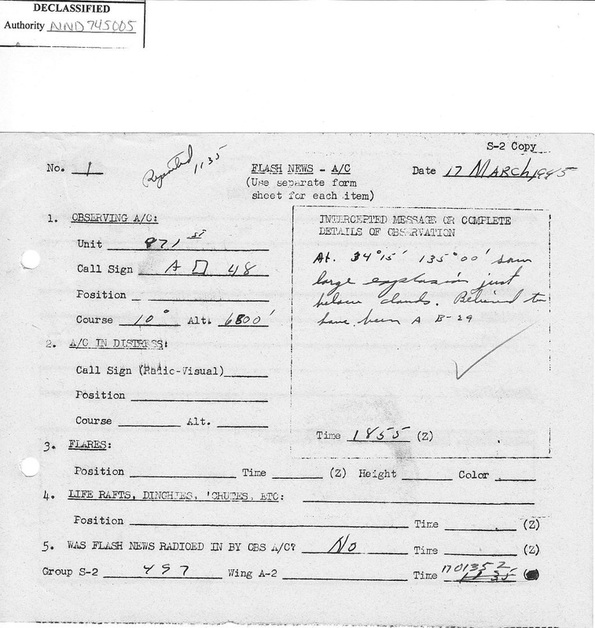 Mission report from A Square 48

Our focus is on: Z Square 8- the "Mission to Albuquerque" -piloted by Major Fitzgerald and Lt. Copeland on which our Uncle Bob was the radar operator.    Z-8 took off from Saipan that night at about 1058Z (2058 Saipan time) , the sixth plane put up by the 500th BG for this mission.  39 of these planes reached Japan and 37 bombed the primary target.  Z-8 was scheduled to bomb from 6600 feet and was carrying 36 M76 incendiary bombs in her bay.  Under paragraph 11, Our Losses, it says, "Z Square 8 failed to return to base.  There is no definite information as to the fate of this plane.  No radio or visual contact was made with it.  Report of crews concerning possible plane or planes exploding or going down in flames may be found in Paragraph 15 of Consolidated Report."  (No paragraph 15 was located-my insert)  No other plane saw Z-8 get hit or go down, and there were no distress messages.  But there is a tribute:  "This missing crew had been outstanding in its work of escorting to home base many other planes that had been in trouble."    *About a fourteen-hour mission, the ramming of Z-8 probably occured between 0345 and 0415 local time.  (Rich Cookson)
Back to top
The following are the three B-29s that were lost on the mass, low level bombing mission to Kobe, Japan on the night of 16/17 March 1945.      Z Square 8, the "Mission to Albuquerque", #42-24849, MACR # 13079. 881st Bomb Sq., 500th Bomb Group, 73rd Bomb Wing.  Isley Field,  Saipan.


* Squadron Navigator, Capt. Roth flew this mission instead of regular Navigator 1st Lt. Frank Bachelder, but we don't know why. Lt. Bachelder was KIA 30 March 45 when flying as an observer with the White crew, when their B-29 had an air-abort and crashed short of the runway at Tinian with only one survivor.

This crew had dropped their bomb load and made the prescribed left turn to exit the target area of Kobe over the Awaii-Shima Island in Osaka Bay. They exploded and crashed over the Akashi area of Hyogo Prefecture in or near Osaka Bay. It was reported that only six bodies were found near the crash site. There were no survivors.

**Special thanks to our friend Rick Feldmann with the 9th Bomb Group for providing information to complete our research on the Christie crew.

Lt. Arthur Christian flew this mission with Major Shaffer, but we do not know in what capacity.
(We are continuing our search for information on this crew.)

This aircraft was hit by flak over the target and had an engine on fire.  According to Japanese reports, this crew and aircraft crashed into Osaka Bay just south of Tetsuya near Akashi.  There were no survivors. 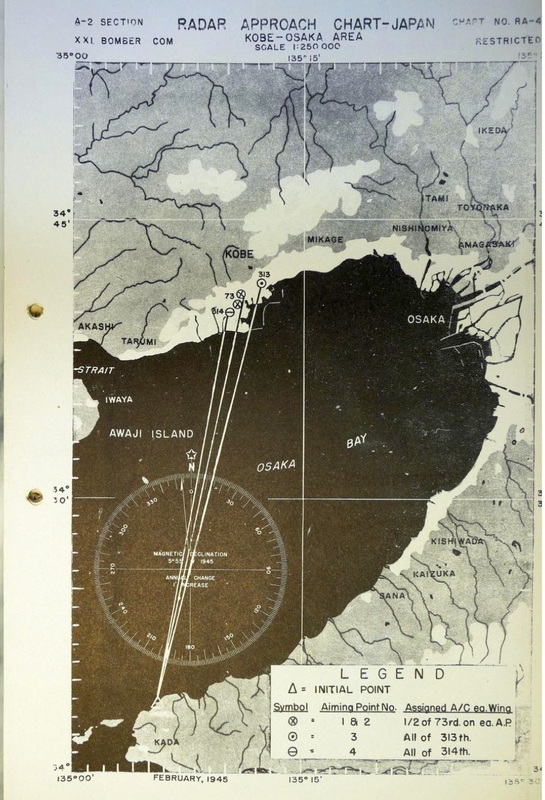 Bomb run instructions for all groups bombing Kobe, 16/17 March 1945 from the IP over Wakayama Peninsula into the city.
Wakayama was the IP for Z Square 8.  Ironically, some reports state that the Kobe Seinen Kaikan, or Kobe Young People Club, salvaged and displayed parts of the wreckage of the Z Square 8 in Wakayama City.  I have been unable to verify these reports.
Bombing Times... 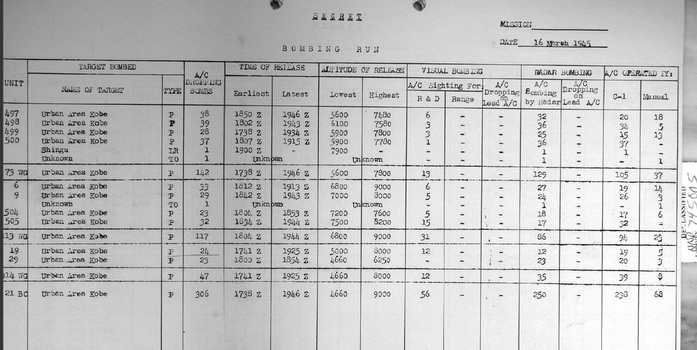 Take-off times
Back to top
Specific Mission Documents and Instructions for all groups bombing Kobe on 16/17 March 1945. 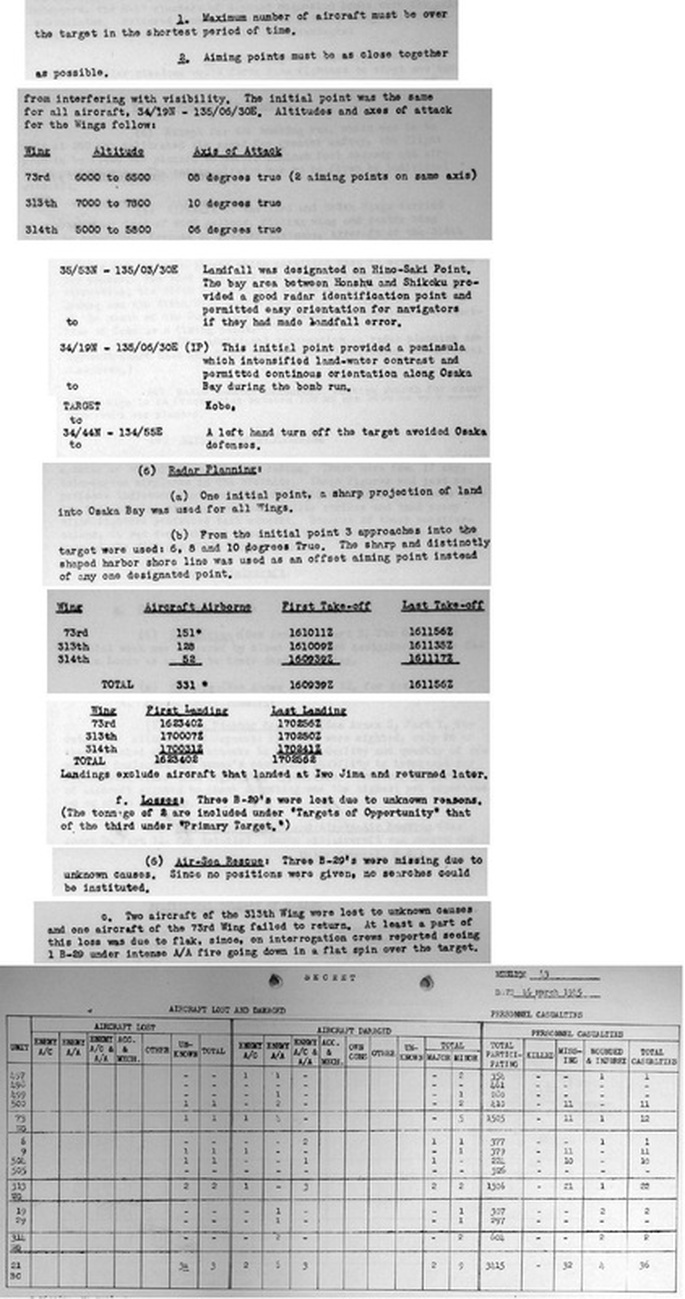 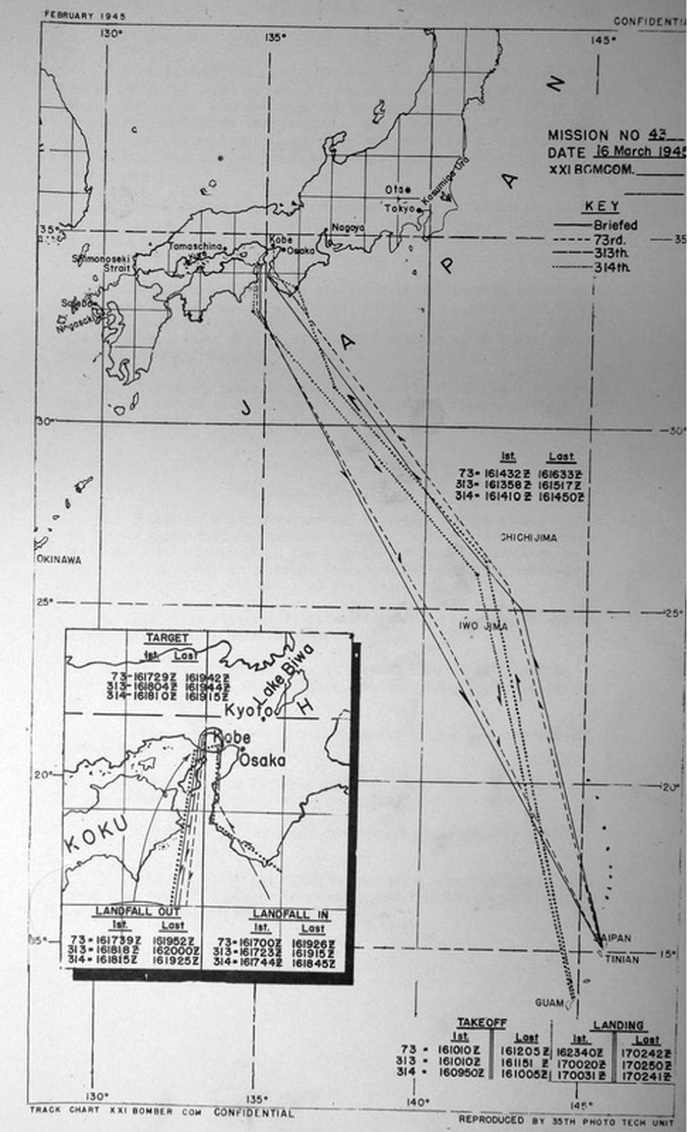 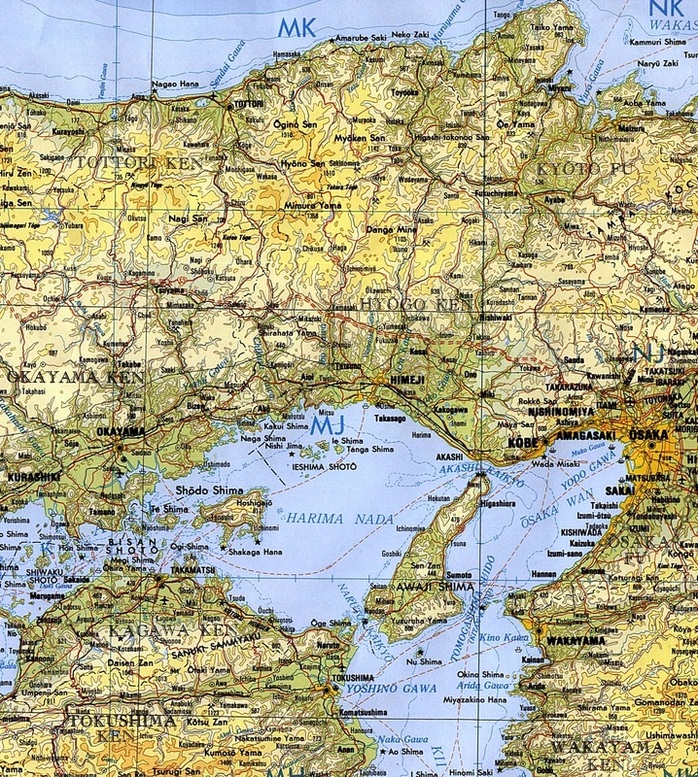 Our Uncle Bob and the Fitzgerald crew were 6th in line to take off from Saipan to bomb Kobe, in a raid composed of over 300 B-29 aircraft.
The Fitz crew would fly to Japan at an altitude of 4000-4500 feet and bomb the target from 6600 feet, at approximately 0400 to 0500.  After their bomb run, they would make a left turn and exit the target area flying over Awaji-Shima in Osaka Bay.

An illustration of what we believe occured to the three B-29s lost on the mass, low-level, incendiary raid against Kobe on 16/17 March 1945. 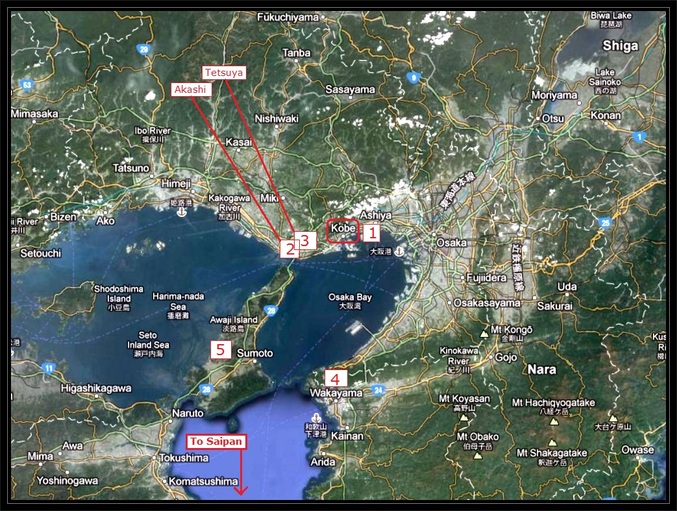 Image by Google Earth and customized by R. Slone


Map point #1-KOBE.  The Fitzgerald crew was rammed by a Japanese fighter flown by Capt.Junichi Ogata over the city and exploded.  The remains of both their aircraft and their bodies landed Northeast of the city in the
Hyogo-Ken POW Internment Camp.  Nine men were KIA, and two parachuted away from the aircraft and were captured.
One of Capt.Ogata's boots was found in the fuselage
of the B-29, and the remains of his fighter aircraft were found near the POW camp.

Map point #2-AKASHI.  The Christie crew (313th, Tinian) had evidently made their bomb run and the left turn to exit Kobe over Awaji-Shima.  Reports state that their aircraft exploded over Akashi on Osaka Bay and there were no
survivors.


Map point #3-TETSUYA.  The Shaffer crew (313th, Tinian) was hit by flak over the target and had an engine fire.  According to Japanese reports they crashed into the sea just south of Tetsuya.  There were no survivors.
Official mission reports state that crews reported seeing one B-29 under intense A/A fire going down in a flat spin over the target. We believe this was the Shaffer crew.

Map point#4-WAKAYAMA.  The peninsula jutting out into the bay was the radar operators IP positioning point for the bomb run into Kobe.

Map point #5-AWAJI-SHIMA.  After dropping their bombs, all B-29 crews were to make a left turn and exit the target area by flying over this island in the middle of Osaka Bay.

** We continue with our search for definitive proof of what happened to the two B-29s from Tinian, and any help would be greatly appreciated to solve the mystery of what aircraft the A Square 48 saw explode over target at Kobe. 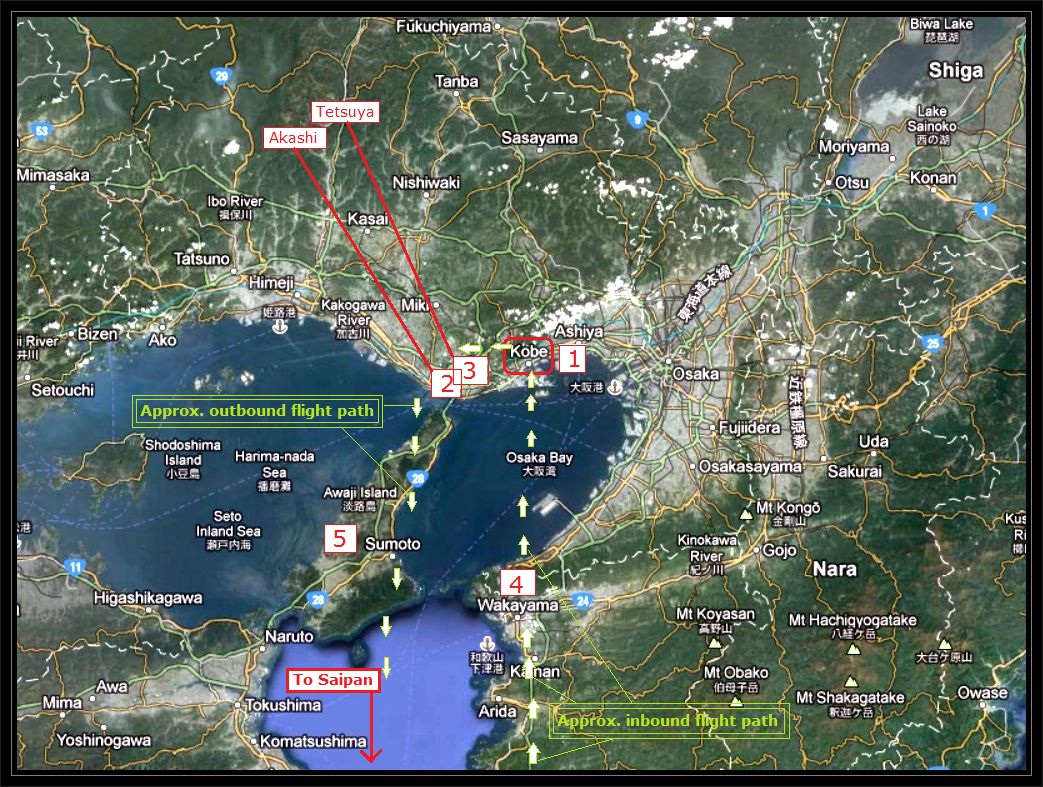 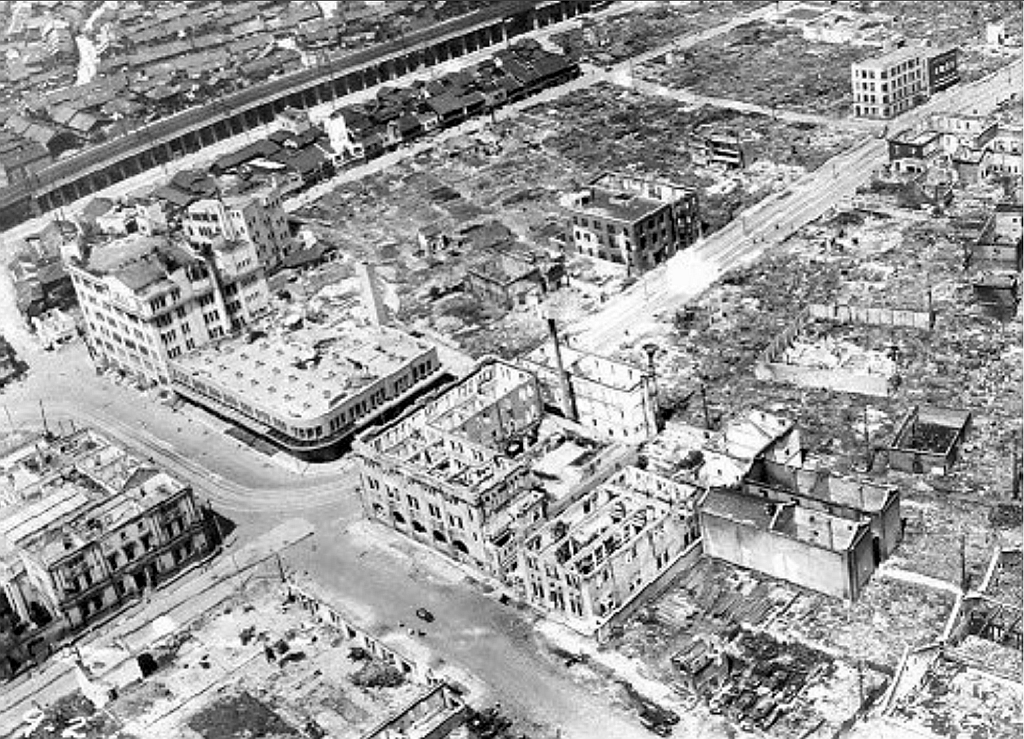 Kobe, circa June 1945, after having endured 3 bombing raids 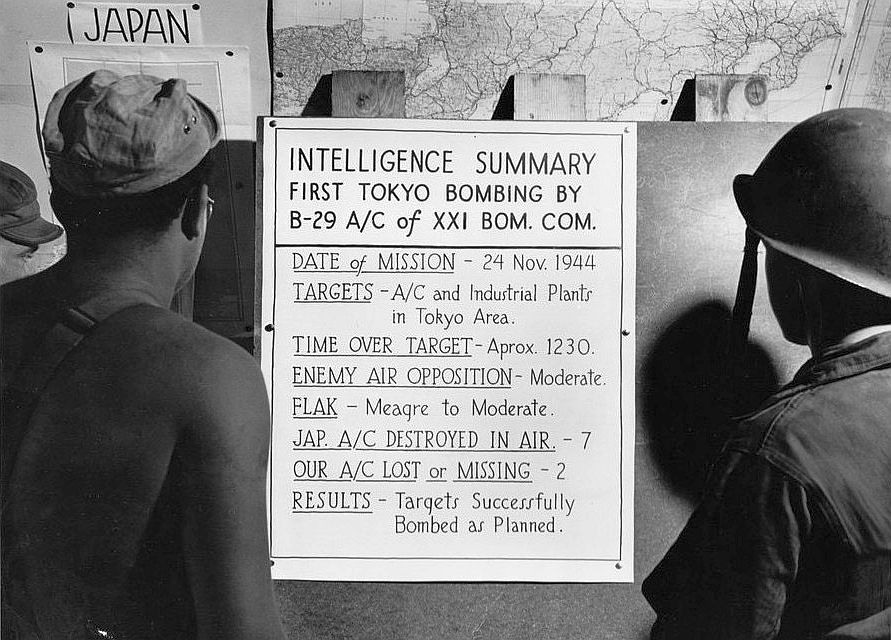 Official Notice Saipan. Posted results of the first bombing raid of Japan by B-29s from Saipan. Target: Tokyo.
Back to top