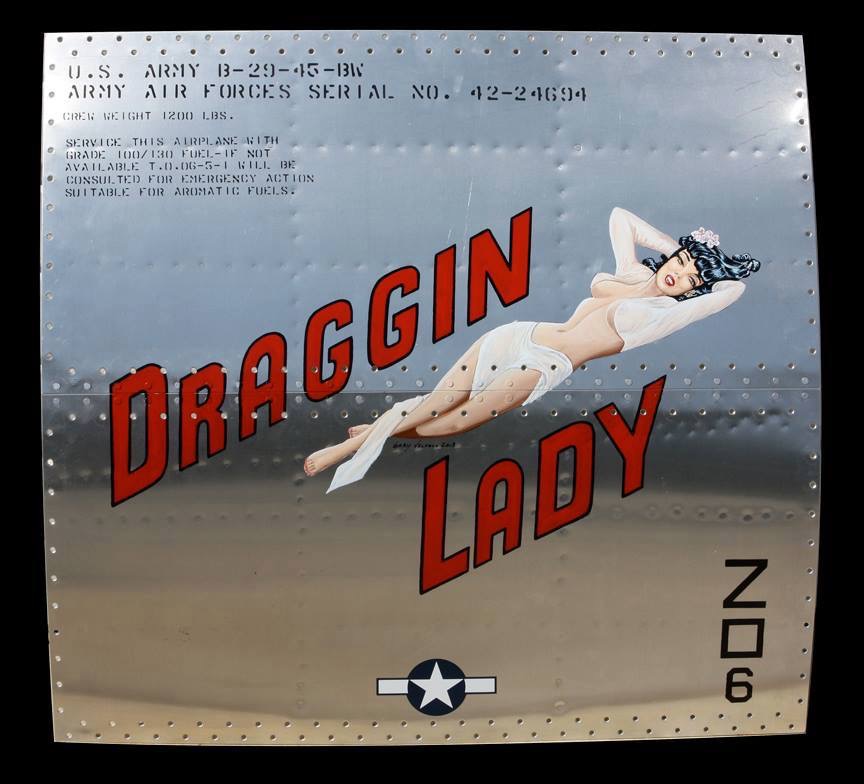 This beautiful panel was recreated by Gary Velasco for my cousin's son, Scott Wise, in 2014.  You can view Gary's incredible nose art reproductions at:  www.fightingcolors.com 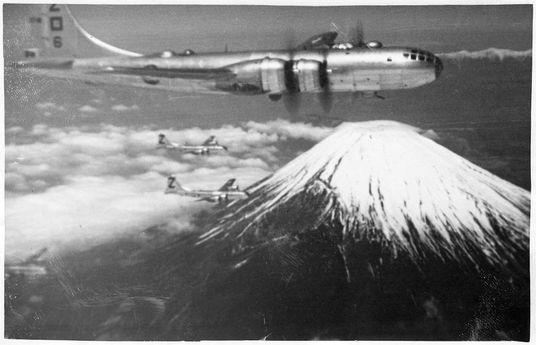 Z Square 6, at the IP........ Mount Fuji. Doug Bulloch was the left gunner on the Z-6 and had a friend take this photograph for him. Doug said they were on a night raid. This photograph was taken in April 1945 or later because the B-29s of the 881st Squadron in the background already have the "large" Z on the tail. (Courtesy of M. Heffner) 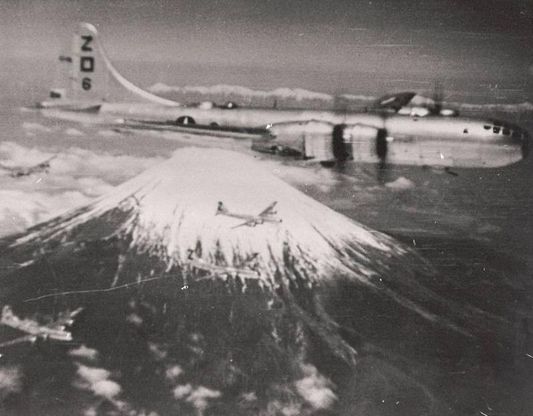 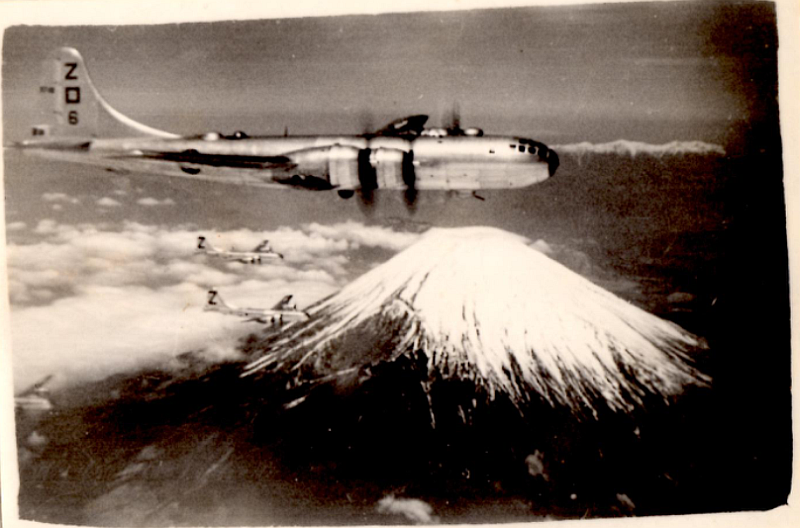 this particular image courtesy of Jeffrey J. Scarpelli...comin from his fathers collection of images 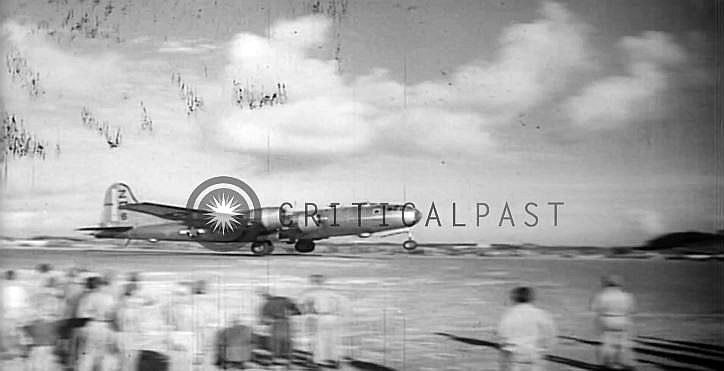 Z Sq 6 take off from Critical Past movie clip 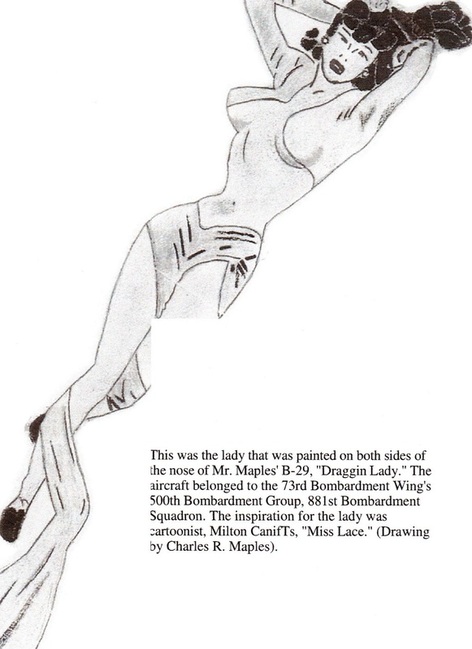 The "Draggin Lady" as drawn by radio operator Charles Maples. This presentation was on both sides of the fuselage of this famous aircraft 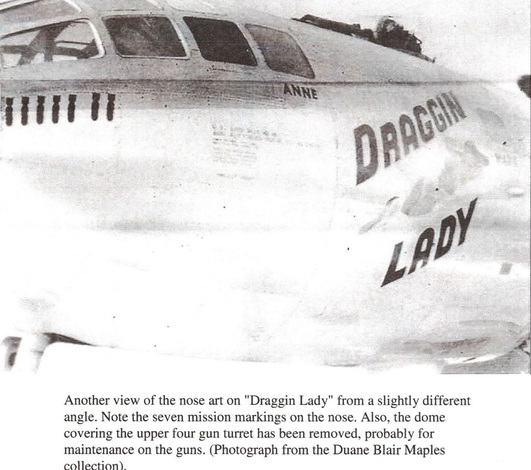 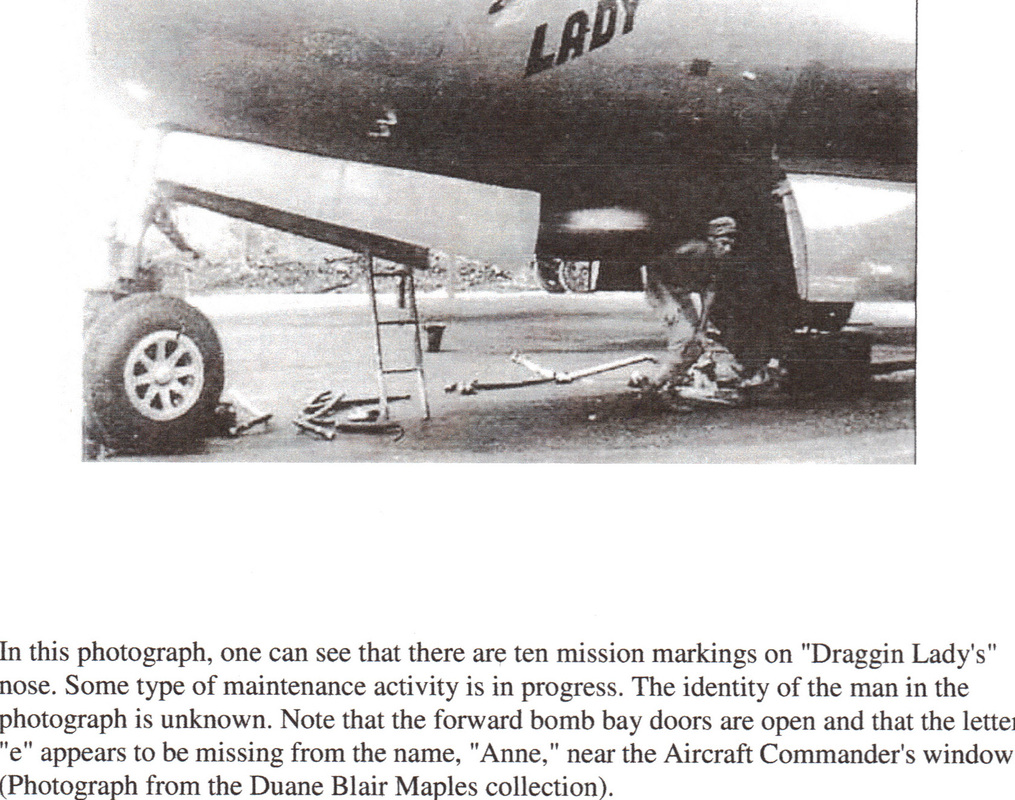 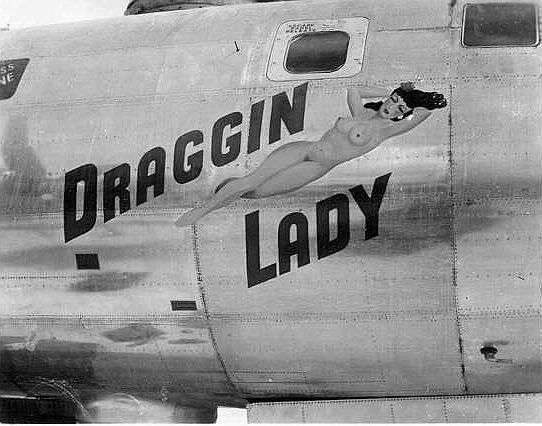 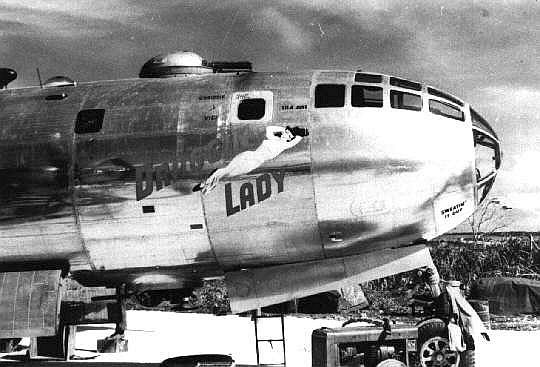 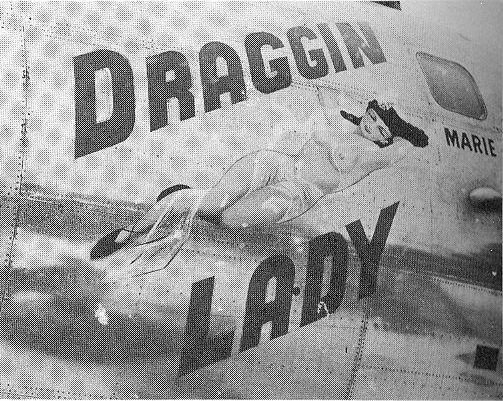 Credit to YouTube and Critical Past for the footage posting/hosting 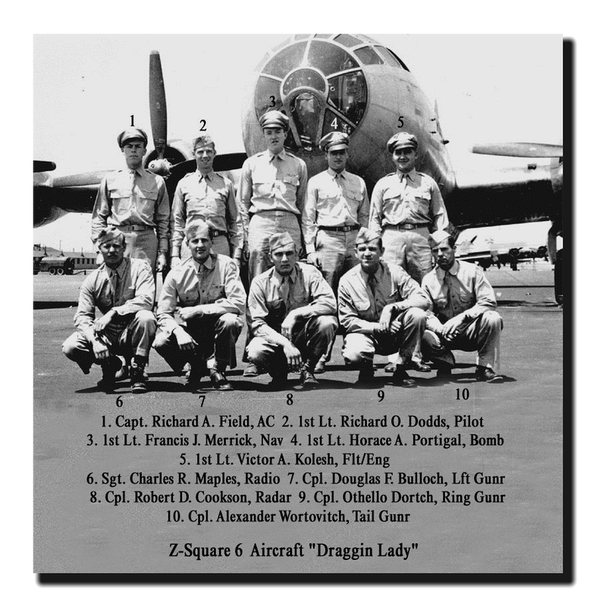 Our uncle joined Captain Richard Field as radar operator on the "Draggin Lady" on May 16th, 1944, at Victoria, Kansas. They arrived on Saipan on November 18th, 1944, and their initial mission was the first bombing of Tokyo by the 881st on November 24th, 1944.
He also flew missions on November 27th and December 3rd.  After the December 3rd mission, Captain Field returned to the states and Lt. Patrick Calhoun took over this crew.
This aircraft flew 12 missions before it was lost off the coast of Saipan while on a slow timing flight, killing pilot Lt. Robert Engle and Lt. Glenn Pavey and an observer.

"23 February 1945"
At about 1250 today, while on a routine local [slow-timing] flight, Z Square 6 ["Draggin' Lady"], piloted by 1st Lt. Robert E. Engle, developed mechanical trouble, tried to land at Isely, couldn't make it -- tried to land at Kobler,
failed and finally landed with wheels down in the ocean just inside the reef north of Kobler Field on the west side of the island.
The plane almost stood on her nose and Lt. Engle and 2d Lt. Glenn E. Pavey were trapped in the nose and drowned.
Of six sailors who were passengers five escaped and one (named Granach?) was killed.
M/Sgt Dooley H. Rogers [probably a ground crewman] and Sgt John L. Lippa [radio operator] were wounded."

[it was common practice to give ground crewmen, sailors, marines, etc., rides on test and training flights]
(Courtesy J.Bowman) 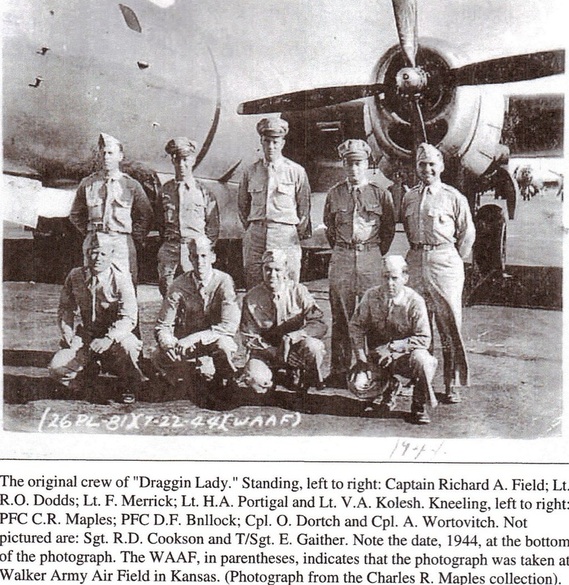 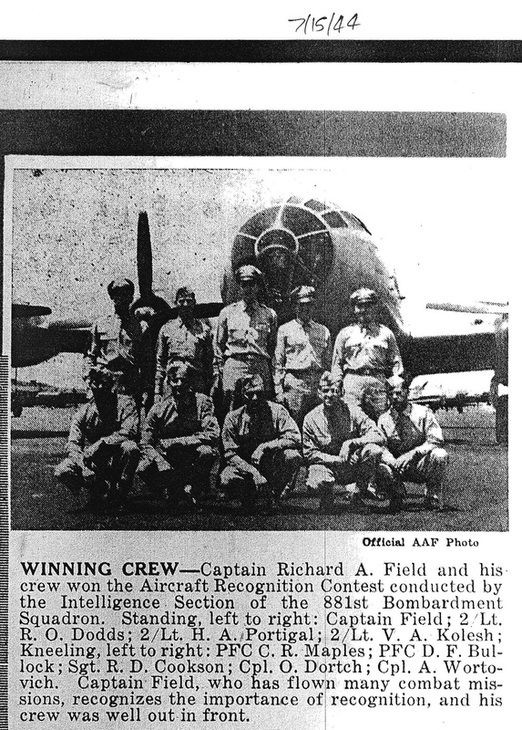 Walker-Talker article 15 July 1944 The men of the B-29 crews in each squadron were drilled on this procedure regularly. According to Jim Bowman, with the B-29 remote gun sight system, it was very important to recognize the different types of enemy planes because you had to set your gun sight parameters according to the known wingspan of that type. It was also equally important to be able to recognize enemy aircraft from "friendlies." No one wanted to shoot down an escorting P-51 by mistake.
Draggin' Lady's Ground Crew 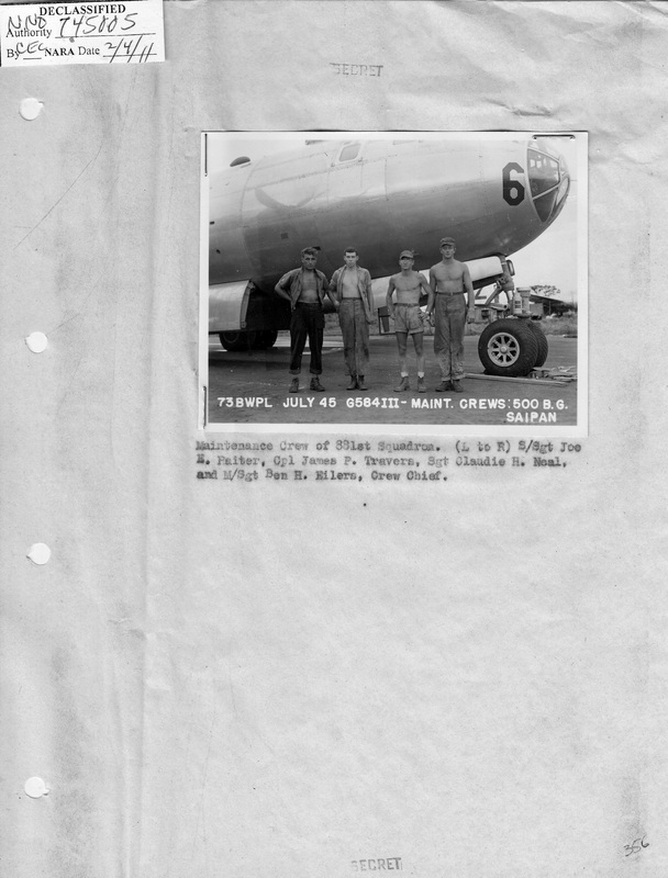 The Walker Talker posted an article in the 27 May 1944 issue, announcing the opening of the Hays Pool.

The opening of the pool in a small town like Hays, Kansas, was quite an event, but like the true patriots thatthey were, the citizens offered it's use to the military.
See our attached newspaper article on our Uncle Boband his crew of the Z Square 6, "Draggin Lady", in the pool during "ditching" practice and procedures. 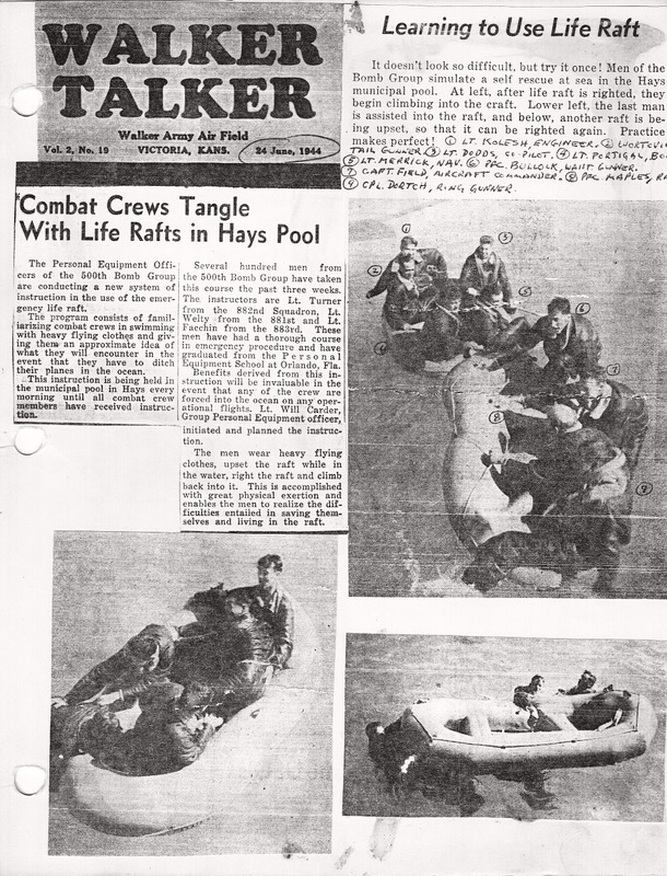 Sea Rescue Training for the Field Crew at Walker AFB 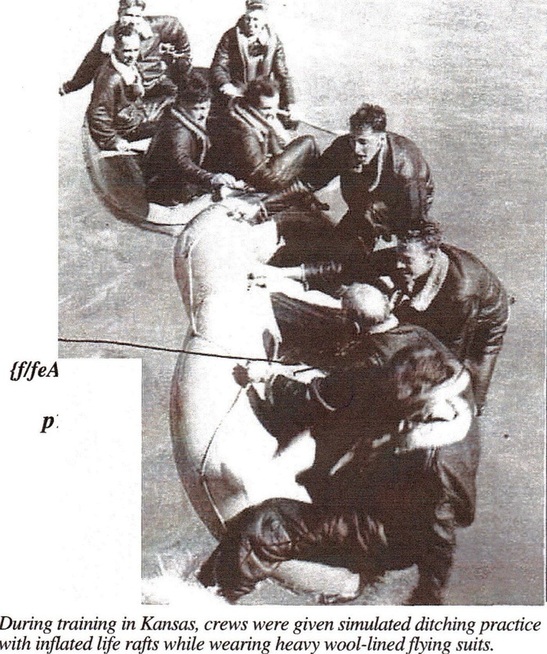 ditching practice enlarged photo of above portioned image
Back to top 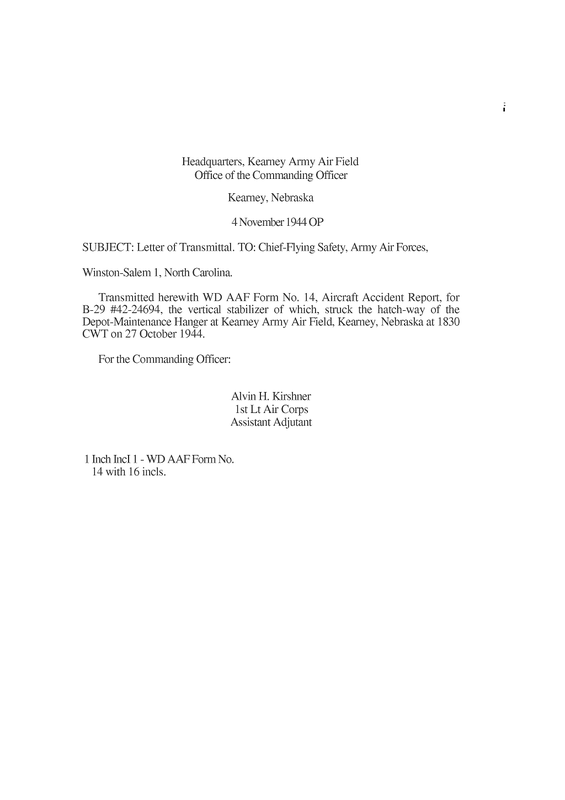 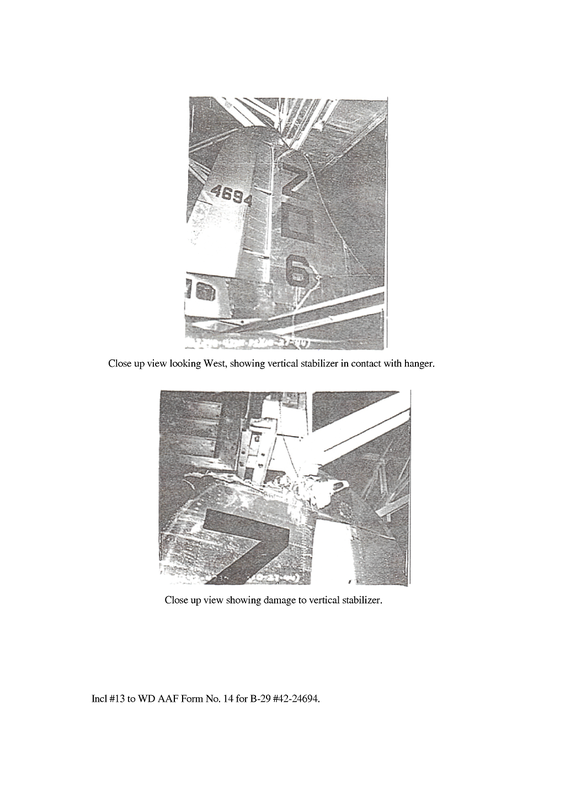 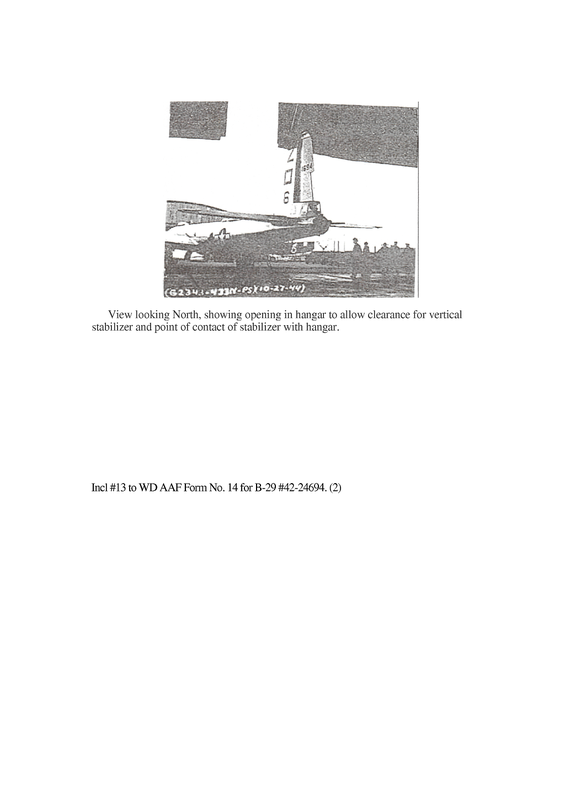 At Kearney this evening there was an unfortunate accident. At about 1800 hours, a base ground crew was detailed to pull
Z-6, 42-24694, of the 881st Squadron, out of the hangar where she had been worked on. Towing a B-29 out of a  hangar was not a simple task. The great wingspan of over 141 feet left little clearance for the hangar doors, and the tail, or vertical stabilizer, was so tall that special doors had been cut above the center of the main doors. The NCO driving the cletrac, a small towing tractor, started out all right, going slow, but once the wings had cleared the doors, he started to turn to the left too soon. This caused the tail, still inside the hangar, to move to the right and crunch into the wall of the hangar.
The result: “Vertical fin damaged from leading edge at rib station 176.55 to rear fin spar, and from rib station 176.55
to tip. Damage necessitates skin replacement, deicer channel replacement from station 168.45 to rear spar, and replacement of 5 each false ribs at fin tip.” Z-6 and her crew, the Field crew (#110), would be delayed a while in getting out
of Kearney.

This entry would not have been possible without Duane Maples, Craig Maples and Rich Cookson.

If you would prefer to download the 3 image files of the 202 order as a pdf, please click below

Download File
The following pages of Special Order 202 directing five crews including Field in  Z Square 6 and Fitzgerald in Z Square 8, to report to Kearney Field, Nebraska, as "flyaway" crews proceeding the the Pacific Theatre 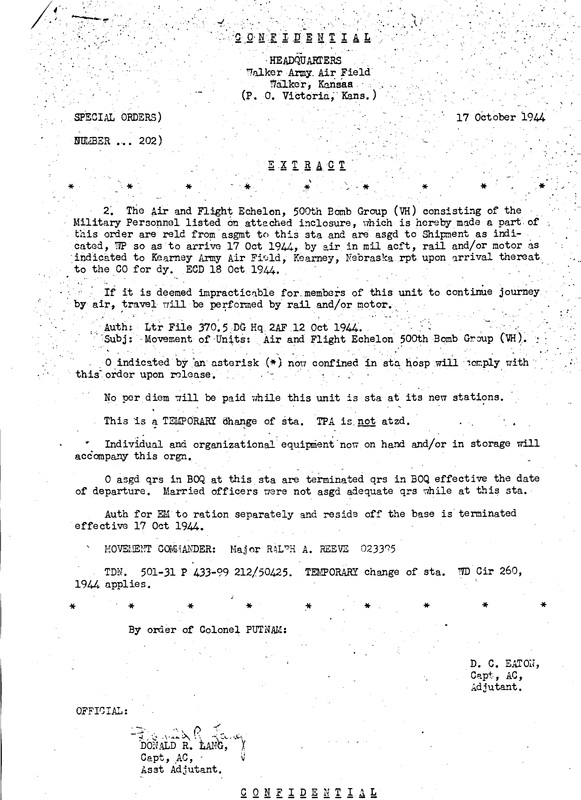 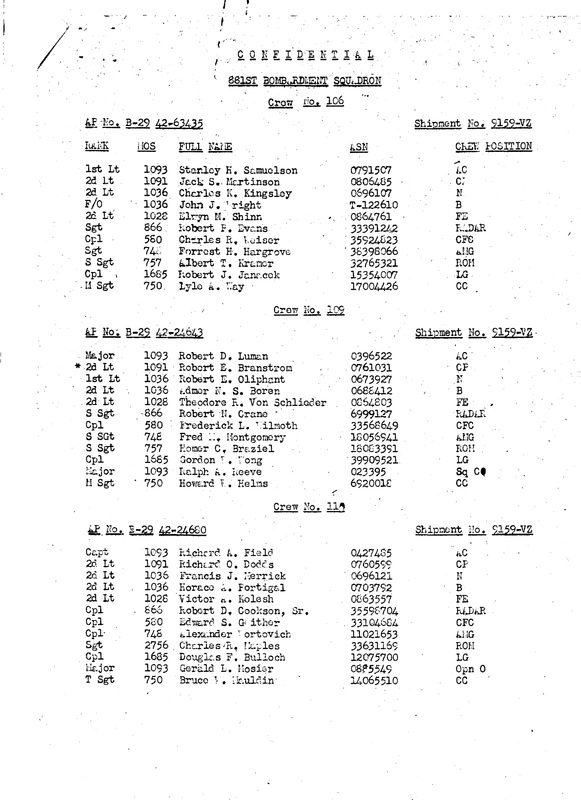 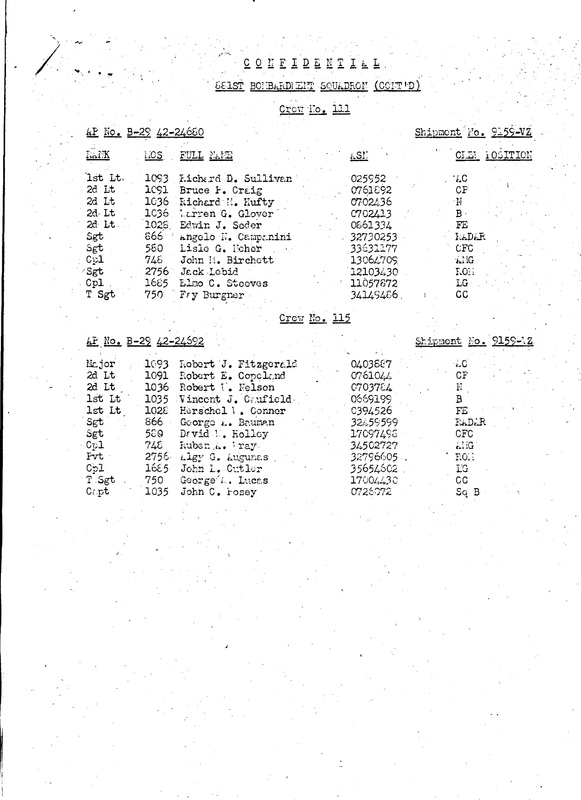 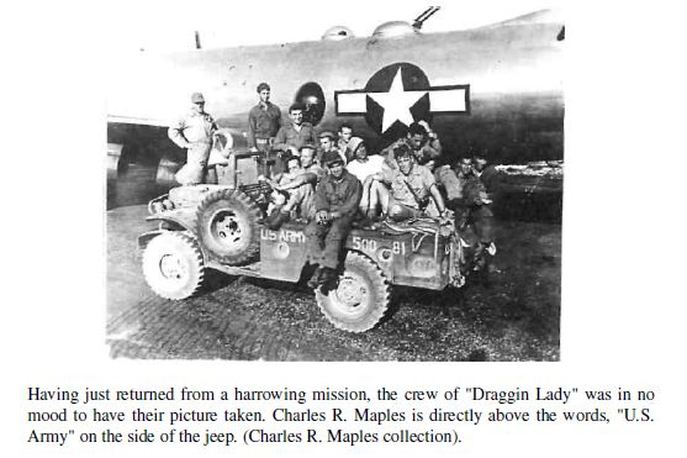 Back to top
The following photographs are of the "Draggin Lady" crash on 23 February 1945 that killed pilots Robert Engle,
Glenn Pavey and an observer.
According to Navigator Gerald Auerbach, F.E. Dooley Rogers suffered a back injury and Radio Operator John Lippa
broke his leg.  Both Rogers and Lippi eventually returned to flight status.  This aircraft never flew again. 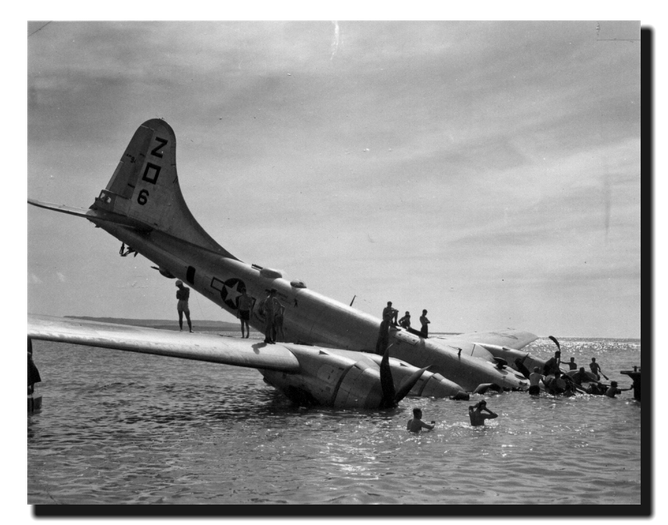